8 Things We Learned About Baking and Murder

From Hallmark’s ‘Murder, She Baked’

What happens when you serve up a tray of warm baked goods with a side of cold-blooded murder? You get sassy Hannah Swensen, local baker slash amateur sleuth in Joanne Fluke’s bestselling books turned Hallmark’s made-for-TV movie series Murder, She Baked. Yep, once more in case you misheard, that’s Murder, She Baked!

And just like crime-solving fan-fave Jessica Fletcher, our protagonist is down-home regular folk just like you (except for all those murders). There are far too many in Lake Eden, the smallest of Minnesotan small towns and home to Hannah’s bakery The Cookie Jar, where locals grab a Cherry Delight (recipe included!) and make friendly chitchat (about murder).

Whipping up these fattening treats as Hannah is Alison Sweeney, Days of Our Lives actress and former host of The Biggest Loser. That’s not a snack-based conflict of interest, Sweeney assures me. “I love a classic snickerdoodle but I’m also down for oatmeal,” she says. “I’m all about a healthy balance.”

Between baking and murder, I assume? “Maybe there are some parallels between baking and crime solving?” she admits, rightfully confused. And just like that, the game is afoot! We’re holding a magnifying glass up to the latest Murder, She Baked for easy lessons on seamlessly incorporating murder into your kitchen.

Pre-heat your Oven and Your Alibi
What’s your suspicious-ass self doing smack dab in the middle of (yet another) crime scene beneath the cloak of darkness? Oh, just delivering this here plate of tasty treats! Make like Hannah Swensen and always carry a delicious box of irrefutable evidence to distract as necessary. “I gave the detective all the information I have,” says Hannah, “but I did bring some Pecan Divines.”

Every Cupcake Is a Clue
When the town Sheriff’s body is found bludgeoned to death, ignore that pile of bricks and focus instead on the pastries at hand: “He’s not holding his gun—he’s holding a cupcake,” deduces Hannah of the bloody crime scene, so “I think it was someone he knew.” On the car’s dash is a pile of confiscated police evidence and a single chocolate cupcake. Do take it as a sign. “I don’t trust anyone else to do this,” says Hannah’s sister.

…But Keep Cool with the Cops
If you’re gonna have a maybe-boyfriend, double points if he’s your plausible motive for loitering around the police station. “Hannah,” warns hunky Detective Mike, “I need you to promise you’re not going to interfere with this investigation.” Damn right you’ll interfere, and you’ll do it the only way you know how: Baked goods. Offer one to the Sheriff and he’ll let you eavesdrop for a whole scene!

Mind Your Substitutions
Baking powder does not equal baking soda, just as Detective Mike does not equal Hannah’s other boyfriend, Norman the Dentist. “My Days audience loves a love triangle,” says Sweeney. But it took two separate viewings for this at-home sleuth to notice there were two of them, and differentiation proved impossible. (Swap baking soda with triple the amount of baking powder, and date both.)

Spot the Red Herring
So the Sherriff’s dead, that’s true, but it’s business as usual at The Cookie Jar, where another riddle needs solving: Old Mrs. Collers has taken her fudge recipe’s secret ingredient to the grave. “Finally a mystery that doesn’t involve a dead body!” says Hannah. Can the lovely ladies of The Cookie Jar deduce the final fixing? They sure can, but it really has nothing to do with this story. Fooled you!

It’s Not a Bribe If You Baked It
If you need unchaperoned access to sealed files, a flustered clerk will fall for food every time. “I brought you some Cherry Winks,” says Hannah to the woman, so distracted by the sugary gift that she fully vacates the office, allowing Hannah unlimited (and illegal?) access to family court files. Know that baked bribes are irresistible to cops and killers alike.

Let Your Accusations Soften First
Sometimes in a whodunit, you’re going to have to accuse a new widow of maybe murdering her husband, be kind and complimentary and ask for her famous recipe first. “Why do I get the feeling you’re not here about a recipe?” she asks. Very suspicious indeed.

Keep a Large and Well-Stocked Pantry
Because the only thing worse than running out of an ingredient mid-recipe is hiding from a murderous intruder in your kitchen while praying your life be spared. An ample pantry solves both problems! With any luck, Hannah’s hideaway will keep her safe to solve tonight’s mystery and a little longer; Murder, She Baked: Strawberry Shortcake is on the menu next. 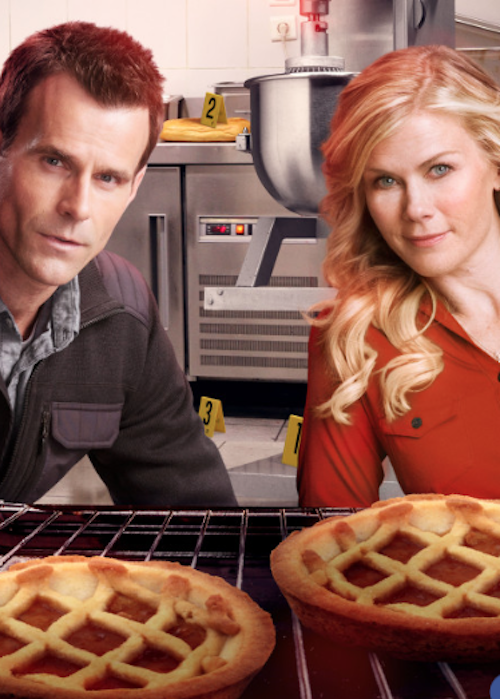