It is only human nature to tell stories, mythologize, and celebrate. Here’s a familiar tale many of us can recite from elementary school: As the end of WWI neared, even Prime Minister Robert Borden’s staunch Conservative government couldn’t deny women’s massive contribution to the war effort. They had stepped up and into men’s jobs, excelling at everything from machinery to engineering to farming, and weren’t about to return to their homes with nothing to show for their efforts. “Nice women don’t want the vote!” cried detractors. Yet women like famed voting-rights crusader Nellie McClung and her cohorts in the Famous Five suffragists nonetheless persisted, and on May 24, 1918, united in solidarity, they won the right for Canadian women to vote in federal elections. The end.

Only not quite. In truth, only some women were enfranchised that day. Being a voter came with stipulations—women had to meet racial and property ownership requirements—that excluded many. Voting was for “civilized” people only, so Christianity, nationalism, and eugenics were deeply and uncomfortably engrained into many suffragists’ politics.

Look closer at the story of women’s voting rights in Canada and no part stands best without an asterisk and an explanation. We mark May 24, 1918, as a milestone knowing that the fight for equal rights began decades earlier and still endures today. Now, 100 years since that achievement, women in Canada are reflecting on what gaining the federal right to vote meant to women then and what it means now. As we piece together all the parts of the story, it behooves us to ask: When rights were granted only to some, should we really be celebrating at all?

Born in Vancouver, Shimizu was an activist and teacher who, along with the Japanese Canadian Citizens’ League (an organization comprised of other university-educated second-generation Japanese-Canadians), fought in the 1930s for the right for Asian immigrants and their children to vote.

This was the topic at hand when Canadian politicians and scholars met in May at the location of the former Victoria Memorial Museum (now the Canadian Museum of Nature) in Ottawa, where the Act to Confer the Electoral Franchise upon Women was passed, to discuss the significance of the 1918 victory. On the panel was Jane Hilderman, executive director of the Samara Centre for Democracy, a non-partisan think tank. “We have a tendency to want to find a date to celebrate, a moment that was the moment,” she says. “But if you take the time to unpack the encyclopedia entry of women’s suffrage, you realize there are many, many moments leading up to and far afterwards. It’s humbling to realize how much you don’t know.”

The names of the women activists, for example, are well worth commemorating. The Famous Five, including McClung, are often seen as the face of the Canadian women’s rights movement (though they didn’t become “famous” until 1929, when they petitioned the Supreme Court of Canada to include women as “persons” under the law). But there are countless women who aren’t as well known. Mary Ann Shadd Cary, for one. She was a teacher born to a free black family in Delaware who immigrated to Canada in 1851. Just two years later, she became Canada’s first female publisher when she founded the anti-slavery newspaper the Provincial Freeman, which discussed women’s rights in tandem with abolitionism and civil disobedience—six decades before the women’s movement as most of us know it.

Sutton was an Ojibwa woman who petitioned the Canadian government and later Queen Victoria, arguing against assimilationist and sexist policies that barred Indigenous peoples from legally owning their land and observing their cultural customs while also having the right to vote federally.

Then there is Flora MacDonald Denison, a Toronto dressmaker turned journalist turned one of Canada’s most prominent suffragist writers. (“Don’t get a swelled head,” reads just one of an impressive collection of vintage hate mail she received). Denison became president of the Canadian Suffrage Organization in 1911. She marched in Washington in 1913 and at Queen’s Park for the provincial vote in 1916. Not long after, she caught the Spanish flu, then pneumonia, and died, nearly impoverished and forgotten.

That these great women’s and countless others’ tireless work gets erased by time can be a discouraging and disheartening thought. Here’s a better one: “These people are never really lost—you can recover them,” says Joan Sangster, author of One Hundred Years of Struggle. The historian’s book, released in March 2018, was timed to the centennial, but in it she tells a story that goes much further than one single milestone. “I’m trying to show that the struggle was actually far longer and more drawn out than we’ve ever imagined in the past,” she says. Teachers no longer dump the suffrage movement into a few years around WWI, nor do they teach a linear tale championed by an intimate group of same-thinking women.

An advocate for women’s rights and one of Canada’s first female doctors, Stowe believed women having the right to vote would give them a chance at better education and employment. She founded the Toronto Women’s Literary Club in 1876 (later renamed the Canadian Women’s Suffrage Association) to fight for access to higher education and better working conditions.

In fact, it’s hard to imagine a more intellectually or ideologically diverse group. “The movement included socialists and conservatives, anti-alcohol temperate advocates and free lovers, imperialists and pacifists,” writes Sanger. They all wanted the vote but for countless different reasons. “Some wanted to join the ruling class, others to abolish it. Some stressed women’s innate biological and psychological distinctiveness, others emphasized the human connection and commonality between women and men.… Some promoted ideas that we now see as a repugnant contradiction to feminism, others glimpsed utopian visions of equality that more readily suit our views.”

History doesn’t let us selectively pick and choose our truths, no matter how we try, so when anniversaries like this one come along, it’s a time to look closely and critically. “This story has an opportunity in this moment to be enriched into a new narrative about who did the work, who was left out, why they were left out,” says Hilderman. Women excluded from the 1918 act included Asian and Indigenous women, who weren’t enfranchised until 1949 and 1960, respectively.

“This part is not a great story and Canadians don’t want to talk about it,” says Melanee Thomas, political science professor at the University of Calgary. Though it’s completely antithetical to celebration, we need to tell and hear those parts of the story just the same. “A hundred years later, we have not moved past explicit race-based politics,” says Thomas, citing headline-dominating debates around topics like “old-stock Canadians” and criticism of immigration. “This shows us that this is not a problem of the past.”

This isn’t to say this hundred-year anniversary shouldn’t be lauded for the great barrier that was removed. Then and now, notes Thomas, “getting things done in politics is shockingly hard work.” Even with all the setbacks and exclusions of an imperfect moment, the extension of rights was a victory that moved all Canadians in the right direction, albeit slowly.

As we celebrate this anniversary, imagine the suffragettes looking forward at us. “Some would admire our progress, certainly. They’d see new legislation and new attitudes about work,” says Sangster. “Others would see the same issues, like violence against women and income inequality.” They’d see that though the youth vote has soared in recent years, fewer than six in 10 federal voters aged 18 to 24 cast their ballot in 2015. They’d see a record-high number of women sitting in Parliament, but know that number represents only a quarter of seats in the House. And they’d see that the anniversary’s falling perfectly atop the #MeToo movement is an ironic reminder that, despite more than a century of hard-won progress by the women that preceded us, our work is nowhere near done. 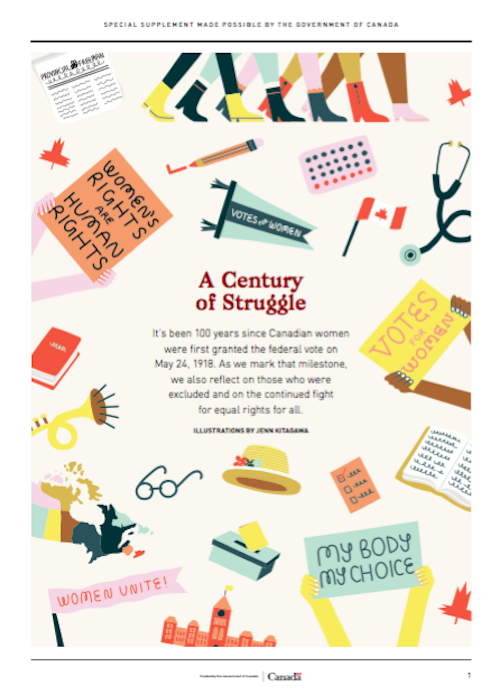 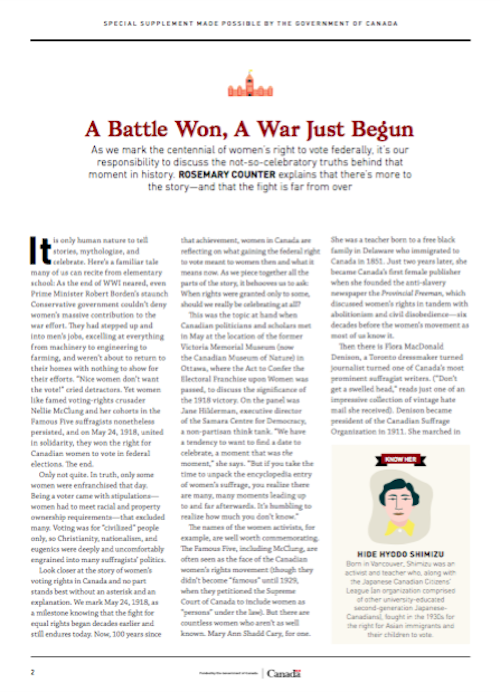 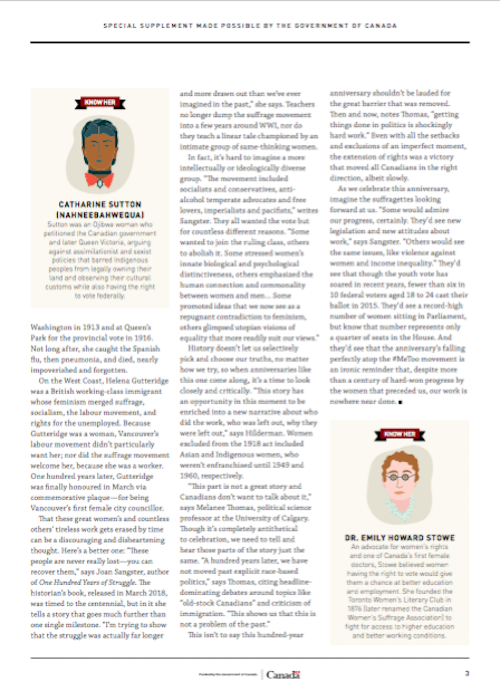