A beauty sleep with that ugly thing?

Like an estimated seven million Canadians, though most will never know it, Egidia Rovinelli suffers from obstructive sleep apnea. “I’d wake up, my head hurting and my throat dry, feeling like I was in a fog,” recalls the 61-year-old retired travel agent from Mississauga, Ont. Without treatment, Rovinelli’s airway relaxes and closes during sleep, causing her to stop breathing about 50 times per hour.

Sleep apnea is an anatomical problem of the upper airway that causes it to briefly close. Sufferers may wake up gasping for air, or they may not; the passage eventually opens again. “It’s not how many times you wake up, it’s how many times you stop breathing,” explains Charles Samuels, medical director of the Centre for Sleep and Human Performance in Calgary.

Despite the name, Fred wasn’t cute. “The more I used Fred, the more I hated him,” she says. Besides making her uncomfortable and claustrophobic, the machine was terrible for travel, which Rovinelli does often. She worried about the effect on her romantic life. Single and dating, she doesn’t want Fred in her bed. “You meet someone new, bring him home and put this thing on? I don’t think so.”

“The CPAP works very well—if people use it,” says Samuels. Compliance, however, is proving difficult. Though apnea is often associated with older overweight men, increased awareness and a rising obesity rate mean young people and women are now being tested and diagnosed. Few are keen on the cumbersome machine.

“Therein lies the interest in other, more agreeable therapies,” says Sachin R. Pendharkar, a sleep researcher at the University of Calgary, who specializes in alternative apnea treatments. Some have been around for a while: Custom-made dental devices pull the lower jaw forward to open the airway. New gadgets include Night
Shift, a product worn on the back of the neck that vibrates when a user rolls onto their back (which causes snoring and aggravates apnea). Others are enterprising variations of old tricks: a tennis ball sewn into a shirt, for example, which shifts sleepers off their backs, is now available online for $19 as the Tennis Ball T-Shirt.

But what’s really making waves is Provent, a system of disposable Band-Aid-like adhesives that stick over each nostril. “They have a one-way valve for airflow, so you can breathe in through your nose, but as you breathe out, increased resistance generates a back pressure that keeps the airway open,” says Pendharkar, who gave a talk on the product at the 2013 Canadian Respiratory Conference in April. The verdict has been mixed: Provent claims its therapy will work for 81 per cent of patients. Clinical tests from the NYU School of Medicine found Provent’s efficacy rate was high, especially for women, but a randomized trial out of Zurich found no difference between Provent and a placebo.

Then there’s a familiar problem: applying it to the real world. For some, Provent works like a charm. It’s discreet, portable and relatively inexpensive. CPAPs sell for $1,000 to $2,500, but are partially covered by some provincial plans; Provent runs about $3 a pop, but isn’t covered.

Some worry Provent could soon join the sleep apnea treatments featured in late-night infomercials. “I cringe when I see those,” says Pendharkar. Apnea symptoms like fatigue, headaches or weight gain could indicate any number of problems, so proper diagnosis is imperative. “People instead do sleep studies online,” says Samuels. “They self-diagnose; they spend money on gadgets that don’t work.” 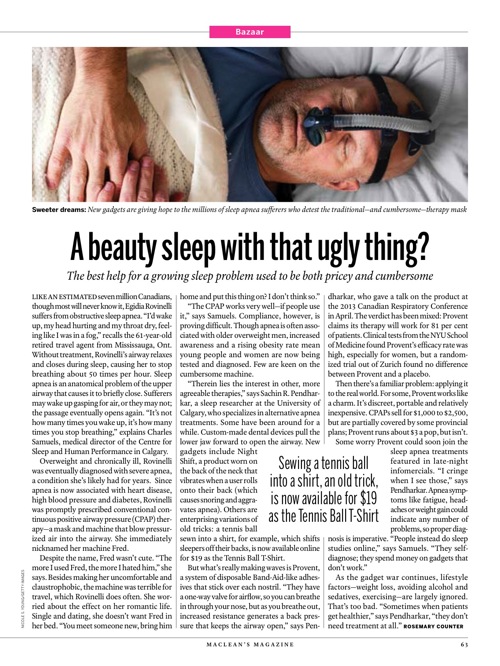