A feast of local delicacies not for the faint-hearted

“Dare me to eat this worm?” I asked, holding the raw, but dead, woodworm from its squirmy tip. For a few pesos paid to an 8-year-old girl, a half- dozen “woodworms” — plucked one-by-one from fallen rotten trees in Filipino mangroves — are served with a side of vinegar to “cook” them in.

It was my latest (and most slippery) swallow in what proved a serious vacation feat: to eat all the weirdest, grossest, stomach-turning, PETA-offending treats that the Philippines has to offer.

Deep-fried crocodile, cheese ice cream, the unfortunately named chicken ass, raw woodworms and street-style duck fetuses are all mine — assuming I can stomach them. Delicious or disgusting? There’s only way to find out.

What & Where: A classic ice cream cone — only cheddar-cheese-flavoured — is sold from colourful wooden carts on just about every street corner. (Keso is a pronounced as queso, or cheese in Spanish.)

The Ick Factor: Knee-jerk reaction to it is not great, as cheese plus sugar seem unlikely allies, but the sentiment doesn’t hold up to scrutiny. Remember cheesecake?

Final Verdict: Disappointingly, my keso cone is sweet and tasty but too subtle; as usual, there’s simply not enough cheese. Eat up and enjoy your lazy street cred.

What & Where: Chicken ass is popular as street-meat from ample vendors, or as an appetizer in local restaurants.

The Ick Factor: High, if you can’t get over the ass-thing, which I cannot. But if you can grill chicken feet, head and intestines, why not ass?

Final Verdict: Forget about asses and you’re chowing down on a familiar, kinda-boring spicy kebab. For the record, tastes like chicken.

What & Where: A challenge to find, but spotted finally on the menu at Ka Inato, a local restaurant in the province of Palawan. Sisig is native Filipino food-prep where animal parts — whether pig head, ox brain or croc meat — are boiled, then broiled, then grilled.

The Ick Factor: Medium, at most. Any reservations of thinly sliced crocodile meat are easily offset by the promise of a spicy-battered deep-frying. And since the Philippines is home to some of the biggest crocs on the planet, remember a crocodile would most certainly eat you.

Final Verdict: Absolutely scrumptious! (And you guessed it, here’s where I sprung for seconds.) With a pork texture and a fishy taste, it’s literally the best of both sand and surf. Only thing missing is a mayo-based dipping sauce.

What & Where: Halo-halo, which translates to “mix-mix,” is a very popular dessert and true to its name: it’s an over-the-top dessert parfait of Jello, fruit (bananas and mango), cooked tapioca, ice milk, ube (purple yam jam) and . . . boiled beans?

The Ick Factor: None at all, until you hit the beans. Kidney and garbanzos lurk in the halo-halo’s deeper layers. Get ready.

What & Where: A developing duck embryo, boiled and eaten from the shell. This one’s cooked atop peanuts and served from a vendor in a night-time marketplace. Enjoy with a sprinkling of salt and a glass of beer.

The Ick Factor: 10 out of 10, so gross its consumption was a dare on Fear Factor, and so eggy in the 40 C heat that I took one whiff and threw up over a wall. True story.

Final Verdict: Everyone has their culinary line and maybe it’s good I finally found mine. That said, I’m told a perfect balut (at 17 days old, the chick won’t have a beak, bones or feathers) is not just a delicious delicacy, but a potent aphrodisiac, too. 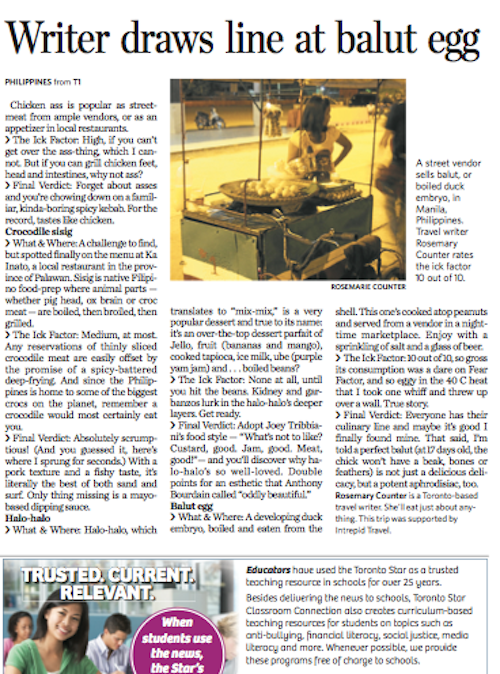