A Honey of a Hobby

With their promise of flowering gardens and golden honey, backyard hives are on the rise

Last year, amid a media storm about bee-killing chemicals, my two younger brothers, George and James, decided to quit just talking about bees and actually get some. George has a friend of a friend who’d been keeping bees for 40 years, and both of my brothers are as interested in environmental stewardship as they are in delicious honey. With an acre of flower-filled green space behind the house but a neophyte’s knowledge of apiculture, it was decided: The backyard was getting bees.

As bee populations drop and awareness rises, beekeeping—as a hobby or a small business—is steadily growing across Canada. “There’s so much interest in urban homesteading, self-suffciency and local food, as well as a movement to relax bee bylaws,” says Tara Zachariah, cochair of the Toronto Beekeepers Co-operative. Last year, the Canadian Honey Council reported more than 8,500 Canadian beekeepers operated a record high of 720,000 colonies—up from 637,920 in 2011. On average, 20 percent of Canadian beekeepers manage 80 percent of hives—meaning 80 percent of beekeepers are small-scale hobbyists, just like us. Hives and bee hotels are popping up atop urban hotels, in public parks and, if you’re brave enough (and have the space), in your very own backyard.

How brave do you need to be? Turns out, not very. “The biggest misconception about beekeeping is this sense of danger,” says James. Yes, both brothers have been stung a few times, but even though hundreds of thousands of bees live in their four hives, stings are rare. To keep it that way, a bee suit—either head-to-toe or waist-up—from a bee supply store is one of the startup tools that will make your life a wee bit easier. You’ll also need prefab or homemade “supers” (the boxes that make the hive), plastic or wax foundations (for bees to build honeycomb on), a smoker (which calms the bees and encourages them to stay inside the hive) and, of course, the bees themselves. Startup costs usually total less than $1,000, depending on how many hives you build.

“We decided four hives was not too big and not too small to start,” says George. They found the right spot—sheltered from the wind with lots of light, and, legally, at least 30 metres from property lines and 10 metres from a highway—and ordered condensed bee colonies, called nucs, for delivery. “You don’t need a permit, but you do need to register your hives,” says Julie White, a board member with the Ontario Beekeepers’ Association (OBA) and a proud mom to 25 hives.

Once a busy CEO, White retired five years ago to pursue a completely different lifestyle. “I wanted to do something in agriculture and to actually make something,” she says. Before committing to her Prince Edward County hives, White joined the OBA, enrolled in courses at the University of Guelph and studied beneath a University of Delaware professor for a year. Newbie beekeepers would do well to take a course in beekeeping, but guidance from an experienced beekeeper has been most valuable for my brothers. Their mentor Milovan Milicevic still visits to inspect and advise as needed. “It’s a master-apprentice relationship,” says James, “like Star Wars.”

Once the hard work is over and the bees are in place, says James, “we try to let them do their thing and to intervene as little as possible.” To ensure the insects are healthy, meaning disease- and parasite-free, and the queen is well and thriving, hives should be checked monthly. But for most beekeepers, just observing your bees as they go about their business becomes an irresistible habit. “I’m there every day,” admits White. The same is true for my brothers. “James is out there all the time, just to get out of real work,” jokes George.

Beekeeping is real work, but practitioners also find it rewarding and even relaxing. “The experience of going into a bee yard—the sound, the smell, the energy—is so profoundly moving and energizing,” says White. You must move slowly and deliberately, says George, so you don’t startle the insects. An agitated hive will buzz at a higher frequency and will sound different—and that goes both ways. “If you’re anxious, the bees know it,” says Zachariah. “They pick up on your moods.” As such, beekeepers learn—by necessity, as to not get stung—to stay alert, calm and present, says White. No wonder beekeeping, like gardening, is often compared to meditation.

“You’re having a positive effect on the bees, and they’re having a positive effect on you,” says James. But there’s much more to it than that. After my family’s hives went in, amazing things started happening around our house: Besides reaping about 23 kilograms of sweet organic honey, our raspberry harvest doubled, our crab apples became edible and pears began to grow on the big tree next door. “The neighbours have lived there for 20 years, and they never knew they had a pear tree,” says James. When they asked what’s happening and how, the answer was easy: We’ve got bees now.

The Plight of Bees:

Bees are much more important to our way of life than you might think: Thirty-five percent of the human diet (and $214 billion worth of global agriculture) depends on pollinators, including honeybees, bumblebees and solitary nesting bees, but their populations are in sharp decline.

“Losses have been high all over the world,” explains Robert Currie, a professor and the head of the department of entomology at the University of Manitoba in Winnipeg, who cites parasites, pesticides and lack of forage as parts of the problem.

In July 2014, Ontario became the first government in North America to restrict neonicotinoids, pesticides that have been linked to the decline of honeybees; Quebec followed suit in November 2015. Meanwhile, urban bylaws are relaxing to encourage small-scale beekeeping, and bee hotels—like the one atop the Fairmont Waterfront in Vancouver—offer space for solitary bees to lay their eggs.

Become a Backyard Beekeeper: Before you commit to bringing bees onto your property, consider the following.

1 / Allergies
Anaphylaxis is serious business, and a sting or two is inevitable. “If you’re allergic to bees, sorry, this is not the hobby for you,” says Julie White of the Ontario Beekeepers’ Association.

2 / Neighbours
It’s considerate to touch base next door and make sure your bees are welcome. Sweeten the deal with the promise of free honey—and healthier gardens for everyone in the hood.

3 / Co-ops
If you inhabit a 400-square-foot apartment on the 20th floor, you can’t have bees. Try a co-op instead. The Toronto Beekeepers Co-operative has hives for Torontonians to enjoy and offers presentations and workshops to encourage local involvement.

4 / Books, books, books
There are tons of great resources for the budding beekeeper’s library. Check out Beekeeping for Dummies (Wiley Publishing Inc.) by Howland Blackiston and The Beekeeper’s Bible (Stewart, Tabori & Chang) by Richard Jones.

5 / Observation
“Most people are fascinated by bees’ social interactions and the way the colony functions,” says University of Manitoba professor Robert Currie. Everyone knows about the queen, but it’s actually 50,000 worker bees that divide a dozen different tasks including foraging, cleaning, egg attending, building and producing wax. Some “specialize,” explains Currie, while others rotate jobs.

6 / Bylaws
Check in with your municipality to make sure your hives tick off all the boxes; urban bylaws governing where hives can be placed are different in every city. 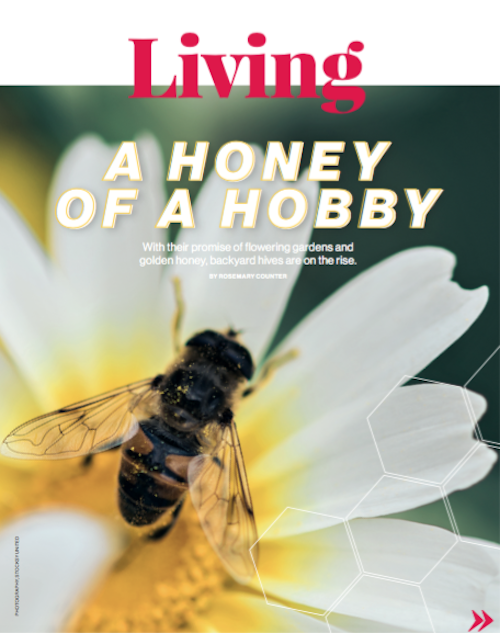 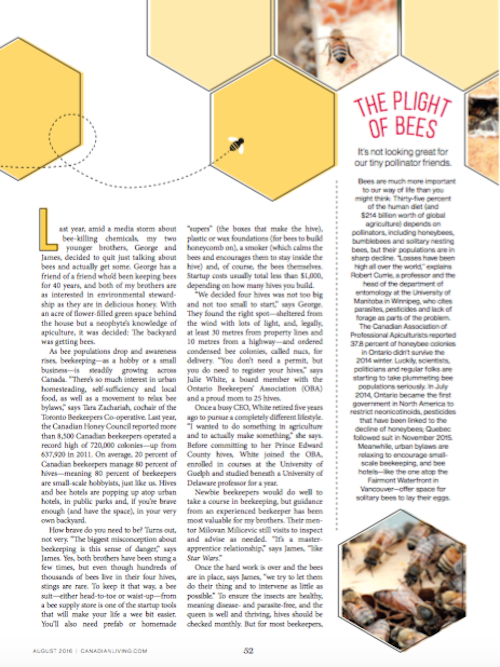 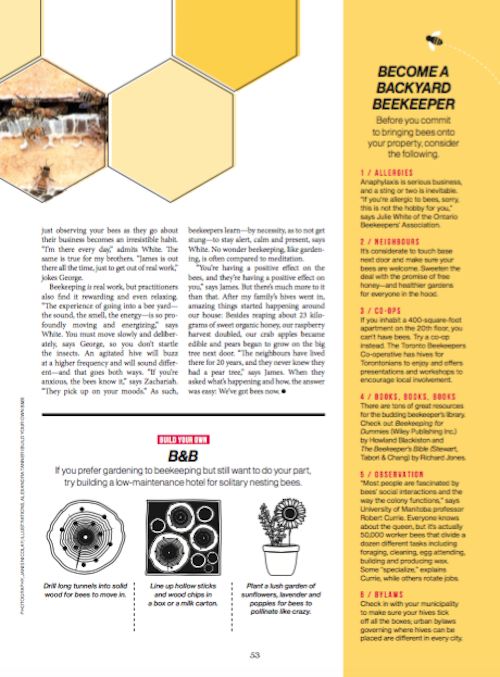