A league of his own

When athletes find themselves in trouble, they call James Bunting

During his first year of law school at Western University, James Bunting saw his best friend, Stefan, get cut from the national alpine team following an injury. After seeing his friend’s lifetime of passion and hard work snatched away in an instant, Bunting was infuriated. “I remember arrogantly telling him not to worry,” recalls 39-year-old Bunting, better known to buddies as Jim. “I told him I’d handle it.”

Bunting got to work, scouring Alpine Canada’s policies. He found one that essentially forbade teams from cutting athletes who were healing from an injury. “We appealed the decision, it went to arbitration, and we won.”

From that moment on, the Torontonian began carving a spot for himself in the sports-law world. In 2002, as a 3L, he nabbed a job that any budding sports lawyer would covet: during the Winter Olympics in Salt Lake City, he clerked with the Court of Arbitration for Sport, which deals with any disputes that crop up during the games. To make it happen, he missed three weeks of school. “Somehow I still passed,” he jokes.

After graduation, Bunting articled at Davies Ward Phillips & Vineberg LLP, and moved into litigation. “I like the strategy and being on my feet,” he says, “and some people will tell you I never shut up.”

Most days, Bunting does general litigation including class action and securities work. But he also handles between two and four sports cases per year, sometimes pro bono. One of his more interesting cases involved the Canadian cyclist Jack Burke, who tested positive in 2013 for hydrochlorothiazide, a heart medication and diuretic that causes rapid weight loss. “I couldn’t even pronounce it,” says Burke, who was then 18. He called his father, who asked Cycling Canada for legal advice, and soon received a list of lawyers who might take the case pro bono. “Jim was the first person to call back.”

During that call, Bunting was blunt with Burke. “He said, ‘Are you being honest? Did you take anything?’” recalls Burke. “I said, ‘No, of course not.’ He was completely behind me from then on.” This was around the time of Lance Armstrong’s doping confession, so everyone was primed to presume cyclists were guilty.

Bunting set out to prove Burke’s innocence. He started by locating the site where Burke lled his water bottles in Malartic, Que. It turned out to be beside a golf course, which uses fertilizers made from waste byproducts — that often contain, you guessed it, small amounts of hydrochlorothiazide. Bunting argued that the fertilizer contaminated Burke’s drinking water. The result: a very rare and difficult no-fault finding that saved Burke’s cycling career.

Bunting’s clients are often just like Burke — athletes who, by no mistake of their own, need serious help. Take the Indian runner Dutee Chand, who at 18 was agged for hyperandrogenism (having naturally high testosterone levels) and deemed ineligible to run in the 2014 Commonwealth Games. “It was unfair,” says Bunting. The ban was outright discrimination, no different than punishing a sprinter for having long legs. In early 2015, Bunting became her lawyer through his connections in the sports-law community. His goal was to lift her ban in time for her to qualify for the 2016 Summer Olympics in Rio de Janeiro. “In my initial call with her, I told her I’d ght for her like she was one of my own daughters,” says Bunting, a father to two girls.

So, in March 2015, Bunting travelled to the Court of Arbitration for Sport in Switzerland and argued on Chand’s behalf in a week-long hearing. He was up against the International Association of Athletics Federations, which said that Chand must lower her hormone levels — for instance, through surgery or by taking hormone- suppressing drugs — to compete. Bunting countered that athletes have all sorts of advantageous genetic attributes. In July 2015, the IAAF suspended its regulations concerning hyperandrogenism for two years. Chand was therefore allowed to run the Olympics in Rio and continue to follow her dreams. (She ran in the 100m event, but failed to qualify for the semi-finals.)

“These cases are deeply rewarding,” says Bunting. “I can give athletes the chance to get back to their passion.” After all these years, he gets the same rosy feeling he did after helping out his very first client — still his best friend. Stefan now owns SXS Fitness, a gym near Yonge and Eglinton, and Bunting enjoys free membership. “They just had hats made for all the members,” he laughs. “Mine says ‘legal department.’” 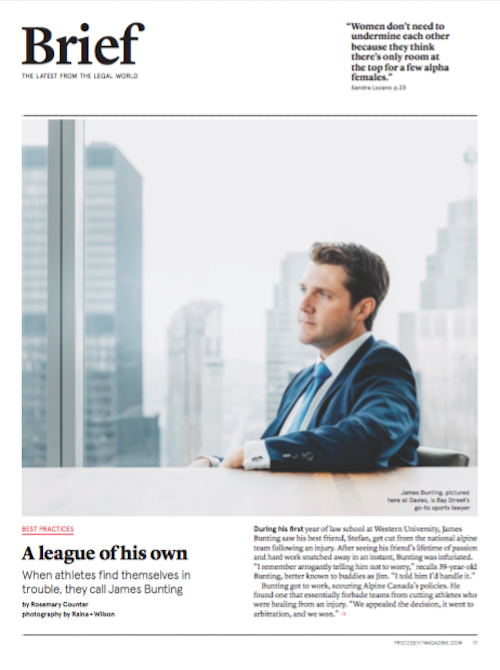 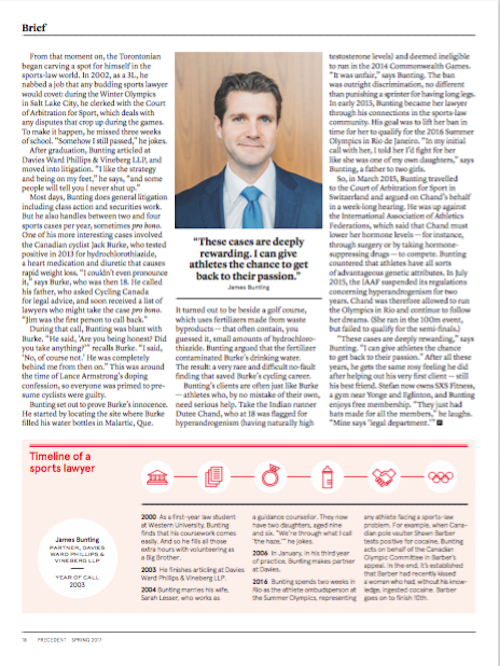