Initially Jordan and I weren’t even sure we wanted a wedding, but we eventually decided on a small family affair at Jordan’s family’s 200-year-old farm and apple orchard in the Eastern Townships of Quebec. We live in Toronto and had 65 guests trek there (thank you, everyone!) from as far as Australia and as close as a cabin down the road.

From the beginning, we were determined to use local businesses as much as possible, even if it meant planning everything in broken French. We rented a tent and tables from nearby venues and looked to the town’s main country club for catering. We kept the ceremony simple and held it in the orchard. My dad did the reading and Jordan’s dad played folk tunes on the guitar, which included The Beatles’ “In My Life” as my marching song.

When it came to our reception, we served farm-fresh salmon, signature cocktails of whisky and apple cider, and a buffet-style barbecue dinner. My mom was amazing, as she baked homemade pies in lieu of a wedding cake. She made 20 of them in a single weekend. On top of the pies, my mom created handmade soap, which we paired with handcrafted pottery by my new mother-in-law to give as our party favours—a true labour of love! 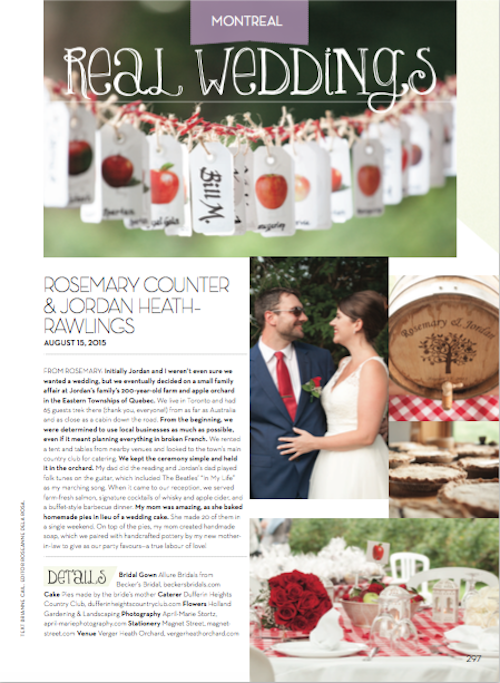