Pregnancy, a time when swollen feet and skin eruptions have moms-to-be craving some primping and pampering, is also the time they’re most worried about what goes on—and therefore in—their skin and body.

IT’S IRONIC, REALLY: Pregnancy, a time when swollen feet and skin eruptions have moms-to-be craving some primping and pampering, is also the time they’re most worried about what goes on—and, therefore, in—their skin and body. The science is often contradictory and convoluted; certain ingredients are safe in some forms but not others, and sometimes it’s a mere matter of dosage. So Elevate asked the experts: Which ingredients in common beauty products should we avoid? Which are nothing to worry about? And how can women look their best and stay healthy during pregnancy?

Salicylic Acid
This mild acid, most commonly seen in acne and anti-aging creams, is a member of the aspirin family—it reduces redness and inflammation. High doses in oral form have been shown to cause birth defects, and there’s no evidence topical application in low dosages could do the same. “But since we know taking it orally is a problem, we tell people to avoid it,” says Dr. Lisa Kellett, MD, FRCPC, DABD, a dermatologist in Toronto. If pimples are a problem, Dr. Kellett suggests a fruit acid to rid yourself of dead skins cells.

Retinol A
Retinol—and its many derivatives—is an animal form of vitamin A that speeds up cell division, making it a very popular addition to everything from exfoliants to wrinkle creams. While some vitamin A is necessary for fetal development, excess can be harmful to your unborn child. Also, most women already carry all the vitamin A stores they’ll need, so it’s best to avoid these products.

Parabens
This common and inexpensive preservative—linked to endocrine disruption and breast cancer—has been the topic of much recent controversy. “Parabens mimic hormone development, and you don’t want to mess around during pregnancy, when hormones are driving the bus,” says Gill Deacon, author of There’s Lead in Your Lipstick (Penguin Group, 2011). Others believe it’s all hype: “Preservatives are a lot better than bacteria and fungus growing in your facial cream,” says Dr. Kellett. If you’re concerned, more companies are offering paraben-free products, making the switch easier than ever before.

Phthalates
This January, after two decade’s of studies showed they disrupted testosterone production in male fetuses, Heath Canada banned many plastic-softening phthalates from children’s toys and bottles. But most people don’t know phthalates pop up in grown-up products too: “There’s almost always phthlates in anything with a fragrance,” says Deacon, and because of proprietary perfume laws, they can be hiding beneath the label “fragrance” or “parfum.” The bottom line: they’re not safe, so enjoy your nine months by going fragrance-free.

Essential Oils
Many mothers-to-be like to turn to aromatherapy to sooth their symptoms, but just because they’re natural, essential oils are not automatically safe. “I actually worry more about naturopathic things, because there are even less studies about them than the drugs,” says Dr. Kellett. Some, like lavender or chamomile, are just fine to relax in the tub with, while others can cause uterine contractions which may lead to miscarriage. Before you drop anything into your bathwater, ask your doctor or midwife.

Benzyl Peroxide
Like most peroxides, the organic compound benzyl peroxide is a powerful bleaching agent found in hair dyes and teeth whitening kits—even white flour. But it’s most famous as a very effective acne treatment—the Archives of Dermatology found nearly three in 10 women suffered from worsened acne during pregnancy—and even better: it’s considered by doctors to be very safe. Though there have been no studies, no case reports indicated risk to an unborn child.

Accutane
This one’s a no-brainer: “Absolutely not,” says Dr. Kellett. Significant studies indicate Accutane (aka Isotretinoin) causes fetal brain and heart abnormalities, as well as miscarriages, fetal loss and major birth defects. It’s been designated Category X—meaning it must be avoided under all circumstances during pregnancy—and if accidental exposures continue, the March of Dimes may call on the FDA for a systematic banning of all forms: “No pregnant woman should ever take isotretinoin, and no women taking isotretinoin should ever get pregnant,” said medical director Dr. Nancy S. Green.

Hydrocortisone
The synthetic version of cortisol, the “stress hormone” produced by your adrenal gland, hydrocortisone cream soothes itching and skin irritations—from psoriasis to hemorrhoids. A number of studies have demonstrated a slight increase in cleft palates and decrease in birth weight in mice, but data doesn’t support this in the great majority of human pregnancies. Because the benefits of hydrocortisone (should you need it) seem to far outweigh the risks, most doctors believe low doses are just fine.

Caffeine
More and more beauty products—especially face washes and eye creams—are adding caffeine to their recipes. Besides stimulating skin circulation, caffeine increases your heart rate and metabolism, making you feel more alert. It does the same to your baby, however, so moderation is key: more than 200mg a day (two cups of coffee or cola) could increase miscarriage or contribute to low birth rate. A fractional amount on your face is negligible in comparison, so slathering up should be no problem at all.

Hair Colour
If you’re still antsy about the hair dye cancer scare of the early 1980s, relax—many of these chemicals were long since removed. It is possible that some chemical compounds in dye could cause birth defects, but you’d need extremely high doses. That’s not to say you shouldn’t be proactive: “Find out what’s in the hair dye you want to use and bring it to your obstetrician,” suggests Dr. Kellett. And just to be safe, many moms-to-be wait until after the first trimester to get a colour touch-up.

Ultimately, it’s all about how much of a pregnancy purist you want to be, says Dr. Kellett. There are chemicals in every product, not to mention the air and water, so find your own balance between beauty and health—then don’t let it make you crazy. “You do want to be that extra bit cautious when you’re pregnant,” says Deacon, “but you can’t go bonkers with worry either.” 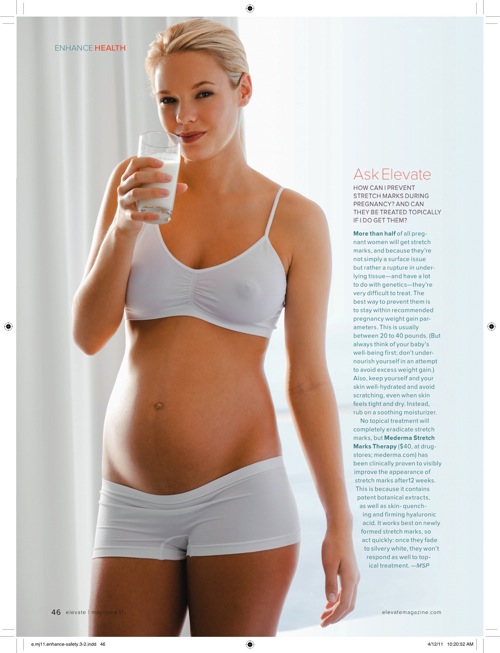 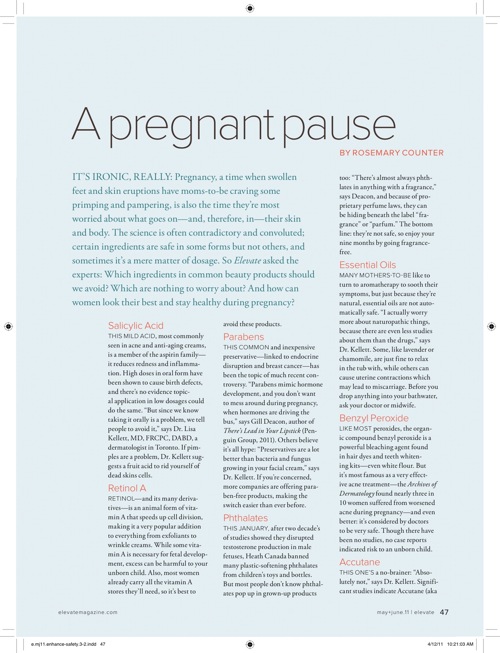 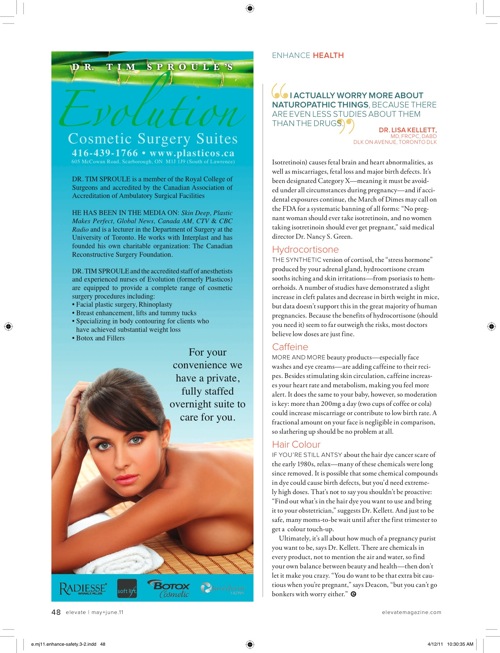