A Q&A with The Handmaid’s Tale’s costume designer

Hulu just aired the finale of the fifth and penultimate season of The Handmaid’s Tale, the dystopian drama filmed in and around Toronto. Spoiler alert: this season saw June (a.k.a. Offred, played by Elizabeth Moss) finally get her bloody revenge on Commander Waterford (Joseph Fiennes), his pregnant widow blur the line between wife and handmaid, and the introduction of a whole new classification of women—the Plums, dressed in lilacs and violets, are newly fertile daughters in training to be marriageable wives. Tasked with portraying Gilead’s layers of sexist subjugation through costumes is Leslie Kavanagh, the Toronto-based costume designer at the helm of the show’s wardrobe department this season. Here, Kavanagh talks about her job and why she’s not moving to LA any time soon.

Working in prestige TV, is there pressure to live in Los Angeles?

I work on American productions a lot, but I live in Toronto. I love that the show’s actually set here, so we don’t have to worry if the CN Tower’s in the background or anything. I also love to see Toronto being represented. LA’s a nice place to visit, but I don’t plan on relocating.

Yours seems like a dream job. How did you get it?

Maybe on the outside it looks like a dream job, but like any job, it can sometimes be nightmarish. Costuming wasn’t something I ever planned to do. I went to theatre school thinking I wanted to be on the other side of the camera, but my sister was a costume designer in the city, and to pay the bills, I helped her out. I quickly realized it was super fun and exciting and that I was good at it. Then I worked my way up the ranks, project by project. And now I’m the boss. I feel very blessed and very, very lucky.

You’ve worked on Toronto classics like Harold & Kumar Go to White Castle, Kick-Ass, Goon, and Total Recall. But have any had costumes as significant as The Handmaid’s Tale?

Costumes always play an integral role, but The Handmaid’s Tale is particularly costume-driven. The colours and the palettes portray the differences between all the classes in Gilead and between Gilead and the free world. The iconic look of the handmaids—the red cloaks and the white bonnet—is etched into our minds from the books and beyond. Every time a new costume designer comes in, they get to put their own stamp on it and push the boundaries even more regarding what the costumes say and mean.

What is your stamp?

Season five is my first season working on the show. It was a really great one to come into because we got to see the hero, June, now free in Toronto. What would she wear after being forced to wear that red dress for so long? I thought a lot about who she is now and how to bring this new side of her to life. At the same time, the world of Gilead is amplified, which we see at Commander Waterford’s state funeral. The show hadn’t done anything of that scope before—700 characters from all the classifications in one place at the same time. And, because of Covid, it was easier to just get the fabric rather than go shopping, so we made most of the costumes—even the contemporary ones.

Serena Joy’s widow outfit was gasp worthy. Walk me through that ensemble.

The point of the funeral is all pomp and circumstance, and Serena Joy is the showstopper. I wanted her to be breathtakingly beautiful and horrific, if that makes sense. Elizabeth Moss actually directed the funeral scene, so she and I collaborated very closely. We decided the widow needed to be regal and elegant yet relatable and sympathetic as a grieving wife. But she also needed to have an evil undertone. We emphasized the baby bump, as she’s pregnant and back in Gilead angling for power. She also has the commander look, a little bit Darth Vader. She was originally scripted in head-to-toe black, but while sourcing fabrics I came across this striking silky midnight-teal velvet. I had to have it, so that became her cloak. And because we were filming outside in February in Toronto, we added thick lining that made it heavy but also luxurious.

Who are the Plums, and how did you decide on their look?

The Plums are the first new class added to the world of Gilead, which is very exciting for me. These are the prominent daughters of commanders, and I needed their dresses to tell you everything you need to know without giving it all away. The colour was scripted as purple, but we played around with all kinds of dyes looking for all shades of purple. Like with the wives, there’s not one colour; there are many shades to mix and match. Meanwhile, I went with a vintage ’50s-inspired silhouette with a swing coat paired with these great purple leather boots.

It feels like the show is set in the past, with the ’50s throwback, but also the present, and also a strange dystopian future.

The Handmaid’s Tale is so interesting in that it’s not defined by any exact time. For me, that means creative licence, but it also means staying in line with this particular world. For example, we don’t show any embellishing in Gilead. All the zippers and closures are hidden, so you’ll never see a button. In costuming, you work so hard on all of these details and nuances, and I find it so fascinating to see what people latch onto versus what they don’t notice. 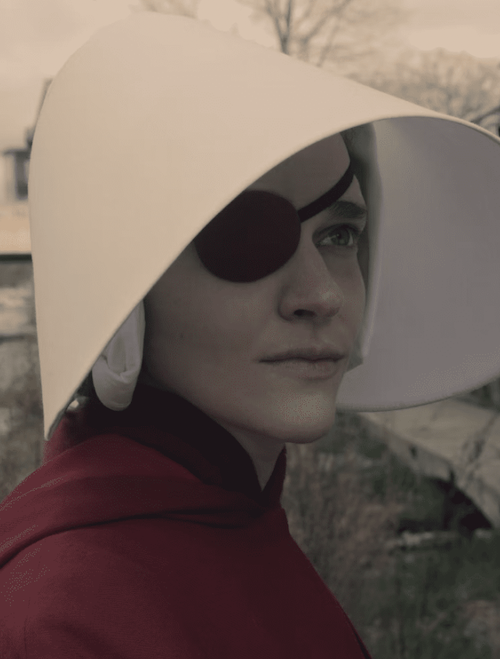