A sweet and satisfying new novel

Review: My Life in Black and White by Kim Izzo

The opening scene: In four-inch heels and gold satin, Clara Bishop lights a cigarette in an interrogation room, her crime unknown. “Tell me, Miss Bishop,” demands the sergeant, “do you always act like you’re a character from a film noir movie?”

Well, yes, actually, she does. In Kim Izzo’s My Life in Black and White, failed screenwriter Clara – a mousy tomboy “more Molly Ringwald than Megan Fox” – travels to London to win back her estranged husband, a sleazy reality-TV producer, from his gorgeous new girlfriend.

Armed with and inspired by a suitcase of glamorous gowns from her grandmother, a film noir actress who careened off the Hollywood cliffs, Clara goes Rita Hayworth red and is transported back to 1952 – as are all other characters; just go with it – to save Grandma and win back her husband’s love.

After a bit of a slow start – Clara in the present, afternoon-drunk in her ex’s T-shirts, is painfully pathetic – we’re finally in 1952.

It’s a strange world, where every waitress is an actress, every actress is a screenwriter, and if you sit down to cry on a doorstep, you better believe the homeowner is the most powerful movie producer in the country.

Doubly convenient if you discover A Woman Scorned, Grandma’s unfinished screenplay about a jilted lover who happens to be named Clara.

All this through a film noir lens – thick fogs, cracks of lightning and possible murder.

It’s not the easiest sell, but Izzo has mapped her plot with careful precision. If readers don’t overthink time travelling, it’s a familiar romcom premise with delightful results (I’m sure you recall Pleasantville as fondly as I do).

My Life in Black and White, however, doesn’t always seem confident in its own premise: “Whatever was going on, [in her present-day life],” Clara puzzles at one point, “the same people … had made the trip back to 1952.”

Parallels are clever, but rarely go unannounced: “It was chilling how much the script mirrored my own life”; “The script full of eerie coincidences were tough to ignore”; and “The tone of A Woman Scorned seemed to have found its way into my attitude.” But Izzo needn’t explain and re-explain Clara’s transition from frumpy to femme fatale; by now, imaginative and insightful readers are firmly on board, thanks mostly to speedy pacing and stylish similes.

Which is where My Life in Black and White gets it just right. Its deliciously campy descriptions – “Her lips were glossed to a shine that twinkled as brilliantly as the crystal fobs hanging from the chandelier” – effortlessly evoke mood, and well-placed film references teach film noir basics without feeling like Film History 101.

Camp and clichés are plentiful, but as meta nods to the genre that never take themselves too seriously, they work like a charm. Or, as Izzo might say, like cream on ripe berries served with freshly poured champagne: sweet and satisfying. Fade out. 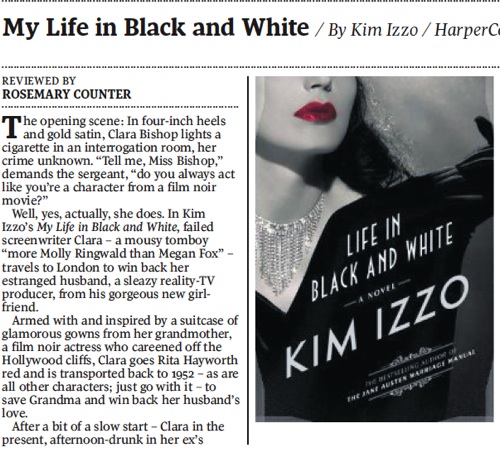 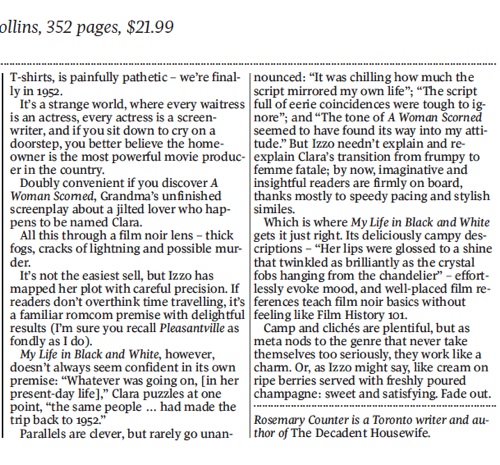