A taste of the action

Not lucky enough to cross the pond for the Summer Olympics? No worries! Here are some closer-to-home, kid-pleasing sporting events

Jr. Jays Saturdays, various Saturdays
A baseball game is already a great use of a summer day, but visit the Rogers Centre on Jr. Jays Saturdays for fun-filled afternoons of face painting, music and Blue Jay inflatables at one of three kid-friendly activity zones. All kids 14 and under can run the bases after the game, and a lucky few are selected to join the players on the field for the anthems, or to lead the crowd in the seventh-inning stretch. Free with your ticket. toronto.bluejays.mlb.com

Orangeville Rodeo Weekend, July 20 to 22
Little cowboys get a glimpse of country life with three days of bareback riding, roping and steer wrestling. (Yep, it’s exactly what you’re thinking.) Aspiring Calamity Janes will find no shortage of ladies’ events, either (including pole bending and breakaway roping), while grownups can kick their heels up with the cleverly named cover band, The Practically Hip. Hard-core cowpokes can camp – a site with hydro is $65 on top of your ticket – or you can ride home into the sunset after a full day of festivities. Adult day pass is $20; youth is $15; kids under five are free. orangevilleramrodeo.com

Toronto FC World Football Challenge 2012, July 21
Never mind the Olympics; you can get your Brit hit with five-time European champs Liverpool FC, who kick off their North American tour in Toronto. Natural grass will be installed beneath the retractable roof at the Rogers Centre for the full soccer experience – a friendly match, of course, that mini footballers will love. Tickets start at $35. torontofc.ca

The Foiling Around Tournament, July 28
Though a sanctioned event with the Ontario Fencing Association, the Foiling Around Tournament held at Ryerson University officially falls in the just-for-fun category. Fun is right: Fencers of all ages and levels are randomly grouped into teams, then individuals fence nine bouts of five touches (when your opponent’s weapon hits your target area). Medals are awarded to the top three teams. Light snacks and refreshments are available to keep spectators satisfied. $25 entry fee; free for spectators.
fencingontario.ca

Ontario Beach Volleyball Championships, July 28 to 29 & August 4 to 5
Get psyched for the pinnacle event of Ontario’s beach volleyball season! Bring the whole family to watch the top players in the province compete for gold. The Ontario Championships feature teams from ages 12 and under all the way to Adult Elite. Fun is served up at Ashbridges Bay – at Lake Shore Boulevard East and Coxwell Avenue. Free for spectators. ontariovolleyball.org

Rogers Cup presented by National Bank, August 4 to 12
Current tennis champ Novak Djokovic will look to defend his title at the 2012 Canadian Open, also called the Rogers Cup, in a nine-day tournament hosted at York University’s Rexall Centre. The top male players of the ATP World Tour, including Roger Federer and Rafael Nadal, will be back in Toronto. The event kicks off with Free Family Weekend on August 4 and 5, then regular prices resume Monday August 6, starting at $25. rogerscup.com

Niagara Open Water Festival, August 16 to 19
Head an hour outside of the city to Welland for the first FINA World Junior Open Water Swimming Championships. Three days of open-water events include one- to 10-kilometre races and an all-day canoe polo tournament, and feature junior and youth swimmers as young as 14, from about 35 participating countries. Spectators can stay dry on the sidelines, and cheer for free. niagaraopenwater2012.com

GWN Dragon Boat Challenge, September 8 to 9
The 18th Annual Dragon Boat Festival at Marilyn Bell Park, just west of Exhibition Place, brings more than 5,000 participants – from novice to expert – to compete in two days of races. Twenty thousand spectators won’t be disappointed; in addition to the races, the festival includes athlete and exhibitor villages, a beer garden, food concessions and the Dragon’s Nest Kids Zone (with oversized board games and an inflatable jousting arena). Free for spectators. gwndragonboat.com

Toronto MS Bike Tour, September 9
Dedicated cyclists and new riders are pedalling in the MS Bike Tours to get outside and raise money for the fight against MS. The tour is a pledge-based fundraising event where Canadians ride through scenic, and often spectacular, parts of the country. Children are very welcome to join the tour – with helmets, of course! – or the cheering squad at the finish line. msbiketours.ca

Karate Provincial Championships, September 23
Karate Ontario, the sport governing body for karate in the province, hosts the provincial championships at Humber College. Recreational and elite athletes register in advance for a competitive day of side kicks and knee drops, where winners get medals and points toward a seat on the provincial team. Little karatekas will be hi-yah!-ing all the way home. $8 for adults; $5 for children. karate-ontario.com 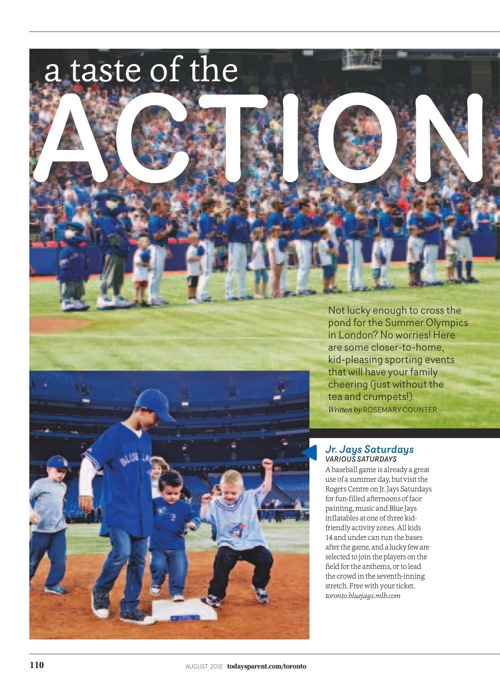 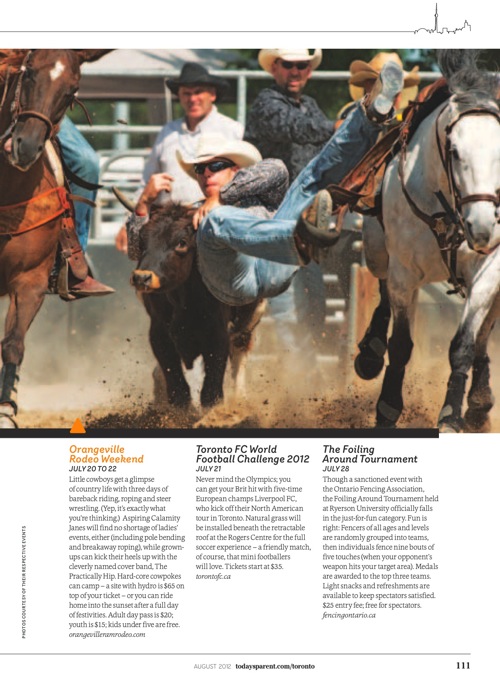