Advice you may not want to take

Review: This is How by Augusten Burroughs.

By his own admission, Augusten Burroughs is not a self-help writer. In fact, the memoirist – best known for his account of ultimate familial dysfunction in Running with Scissors – doesn’t even like self-help. When a well-meaning stranger in an elevator suggests he might smile, or as he sees it, “sprinkle baby powder on top of a turd,” Burroughs declares affirmations of positivity as “bogus, side-of-the-cereal-box psychology.” Unlike his book, I assume.

This Is How: Proven Aid in Overcoming Shyness, Molestation, Fatness, Spinsterhood, Grief, Disease, Lushery, Decrepitude & More for the Young and Old Alike (did you get all that?) is equal parts self-help and anti-self-help, with a dash of memoir. Though pegged as humour, and Burroughs can nail a zinger like no one else, 28 how-to chapters quickly move from the flippant How to Ride an Elevator (see above) to a biting How to be a Good Mental Patient to a heartbreaking How to Let a Child Die.

Each chapter, despite massive topical and tonal discrepancies, spits out so-called common sense – in reality, most are vague to the point of frustration – for the depressed (“If you hate life, you haven’t seen enough of it”), the confused (“It’s hard to find what you don’t know you’re searching for”), the unemployed (“When you try to do or be something, you can’t do it or be it”), the shameful (“Shame is a barnacle you have to find, then scrape away”).

More tangible advice teeters between snark and sap. To alcoholics: “To stop drinking, you stop drinking.” To those feeling sorry for themselves, buck up: “Even if you are a victim, you must never be a victim.” If you’re overweight, it’s all mental: “If you find you require willpower, you aren’t ready to lose weight.”

And, in the chapter immediately following that, How to be Thin, Burroughs braves anorexia. “I don’t think the media images matter at all, to anybody,” he writes, casually citing one anorexic teenager he spoke to. (Burroughs relies not on research, but on anecdotes – his one fat friend, a guy he used to date, etc.) Then, he says what we’re all thinking: “If I were an anorexic girl … I would feel so fat and depressed that I would immediately want to diet.”

This is the problem: Burroughs is not an anorexic girl. Perhaps it’s unfair to expect him – a fortysomething non-anorexic male with no discernible training or expertise in the field – to offer helpful insight. And then a bigger problem: Uh, who is This Is How for? Not self-help junkies (myself included) seeking the comfy self-assurance we know and love; not anorexics or alcoholics or anyone with a legitimate problem to be fixed; and not the anti-self-helpers either, as Burroughs promptly falls prey to the very same formula. And so here, he flounders.

Where Burroughs thrives, however, is when he turns back to memoir writing. How to Finish your Drink, about Burroughs’s 1995 stint in AA, and How to Hold on to Your Dream or Maybe Not, on Burroughs’s wannabe-actor days, both work like hilarious charms. A videotape of himself performing “a play written not by a writer but by a happy person who was given a typewriter for Christmas” leads Burroughs to rethink his life plans: “Except for the nervous twitch of my left eyelid, the motionless figure on the screen appeared to be a JC Penney mannequin,” he writes.

It’s this first-hand black humour – Burroughs’s bread and butter – that makes How to End Your Life, quite ironically, the life of This Is How. “There’s always suicide,” he casually begins, describing the goals of his 14-year-old suicidal self. “Punishment of all those who made me miserable; The infliction of lifelong guilt and remorse in everyone who had ever met me; Idolization by other suicidal teenagers.”

Even in this, surely one of his darkest moments, Burroughs finds the same improbable positivity that he claims to abhor. “If you believe suicide will bring you peace … you are displaying self-caring behaviour. That strikes me as optimistic.” For someone who loathes self-help, Burroughs found it in the most obvious of places: himself. Now if only he might stick to what he knows. 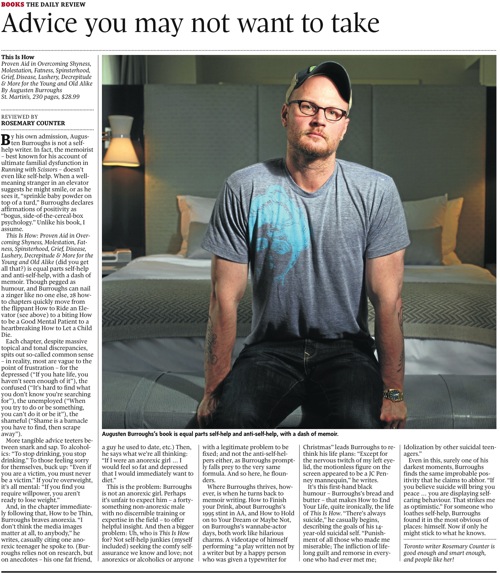