Slacker fathers only elevate, inspire the good ones

Adam Sandler plays Andy Samberg’s dad in this weekend’s That’s My Boy — not to be confused with his movies Big Daddy or Grown Ups. Sandler plays the “world’s worst dad.” Before hitting a big bong: “I don’t wanna do that in front of my kid! Turn around for a minute.”

Competition for world’s worst dad is fierce. Another recent movie, What to Expect When You’re Expecting, has a whole walking group of them. “Stuff just happens, okay? Last week, my kid ate a cigarette!” says one. “I picked up the wrong baby from daycare,” confesses another. “No judgment!” they declare, with high-fives.

“They should have come to me for that movie!” says Thomas Hill, sitcom developer and author of What to Expect When Your Wife is Expanding (yup, you read that right). “It’s part-parody and part-father’s perspective on having a baby,” he says.

Hill should know what to expect by now — he’s got six kids. “One in law school and one in diapers,” he laughs. The baby is just eight months old. “People always ask how I’m sleeping. And you know what? I’m sleeping fine.”

All jokes aside, Hill’s no slacker (“at least not in the procreation department!” Another joke). Like in the sitcoms he creates, lazy dads are usually a persona that sells. “Somewhere around the ’50s and ’60s, the stern authority dad became someone to rebel against,” he says.

But are a slew of lazy, incompetent dads giving the growing number of loving, helpful fathers a bad wrap? Statistics Canada says the country’s got more than 8 million fathers — bio, adoptive and step-dads included — and they are helping more around the house (up 19% since 1986). More today are enjoying paternity leave (up 22% since 2004). Stats Canada found the number of stay-at-home dads has tripled in three decades; men now account for 12% of stay-at-home parents.

Steve, a 31-year-old stay-at-home dad in Edmonton, is no slacker. Besides caring for three boys — ages 5, 3 and 1 — he runs a freelance web design business and blogs at Dadvskids.com.

“I started blogging because I didn’t know any other dads in my situation,” he says. “Staying home was a big adjustment, but the blogging community has been amazing. These guys have seen it all before.”

If surrounded by awesome hands-on dads, does the slacker trope offend Steve? Not a bit.

“Being a dad comes with a ton of stereotypes and personally I like it that way,” says Steve. “Dads get to find their own way to parent. I don’t sweat the small stuff and the rest seems to work out fine.”

Equally understanding is Kevin, a 45-year-old dad from Langley, B.C., who blogs at Cosmicdad.com. “A true slacker is one whose heart isn’t into their role. And stay-at-home or not, most dads’ hearts are with their kids — they just need some on-the-job training,” he says.

So while attachment Moms squabble over who’s mom enough, dads — slacker or otherwise — score a forgiving free pass. “Are all dads slackers? “Certainly not,” says Hill, “but it reflects a reality that dads don’t want to be that just-wait-till-your-father-comes-home dad anymore. They want to be silly and fun now.”

Maybe Hollywood slacker dads — even Sandler, I hate to say — allow real dads to go a little easier on themselves. And though we probably won’t see moms losing their babies in grocery stores anytime soon, perhaps they might also embrace the message: “No judgment!“ 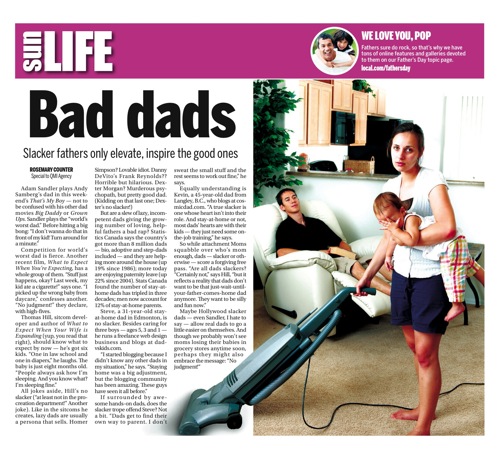