Beating the blues with yoga

The Blu Matter Project grew out of a personal tragedy. In 2012, following her brother’s suicide, Linda Malone began suffering from post-traumatic stress disorder. The Toronto yoga instructor had been practising for 13 years, and even as she struggled with depression, she found that she benefited from her daily fitness routine.

“People in the change room would stop me and ask ‘How are you?’ The easy answer’s ‘fine,’ but it didn’t feel right,” says Malone. Instead, she was honest. “I’d say, ‘I’m not good today’ or ‘it was hard to get out of bed.’ ” Awkward truths, perhaps, but peoples’ responses were rather amazing. “People kept pulling me aside, telling me they were suffering, too.”

To build on this honesty and connection, Malone established the Blu Matter Project, an off-shoot of her IAM Yoga studio. Through classes, lectures and out- of-town retreats, the not-for-profit organization seeks to “lift people out of depression … one sweaty yoga mat a time.” Winter offerings include a free weekly class dubbed Antidote Yoga, aimed at combatting seasonal depression.

The mind-body connection is of increasing interest to modern scientists. Researchers at Stanford University, for example, examined the MRI scans of meditating monks and discovered they received a rush of dopamine – the chemical neurotransmitter that controls the brain’s pleasure centres – from thoughts of compassion and altruism.

So while practitioners such as Malone have long believed that yoga helps ease symptoms of depression, science is slowly proving it. In 2010, Harvard researchers noted that even a sin- gle yoga class increases the brain’s level of gamma-aminobutyric acid, or GABA, a neurotransmitter with anti-anxiety properties.

And in 2013, the journal Frontiers in Psychiatry published Yoga on Our Minds: Two professors from Queen’s University reviewed more than 100 studies on yoga and mental health and concluded that yoga had benefits for people with depression, insomnia, schizophrenia and attention deficit hyperactivity disorder (ADHD). Research using MRI scans, double-blind studies and more rigorous science, they wrote, “would facilitate greater scientific understanding … of this 5,000-year-old revered practice.”

Held at the IAM studio in Toronto, Blu Matter’s Antidote class avoids flaky, mystical yoga terminology – “we’ll never say ‘open your heart’ or ‘let your hip bones shine,’ ” says Malone. Students end class with a liquid shot of mood-boosting vitamins B and D, which are likely to be depleted during the long, dark months.

“Yoga shouldn’t be considered a cure-all for any and all afflictions, especially mental illness,” he says. Depression is a mind-body experience, he says, and yoga is just one tool that can help. “We work with the body and breath to calm the mind and the nervous system.” 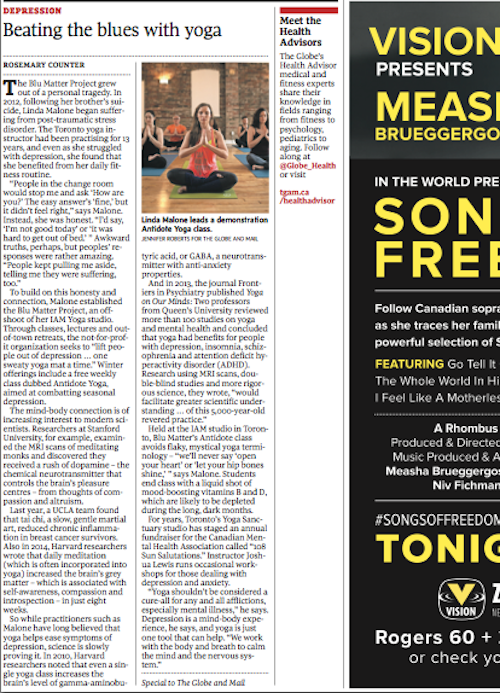