Are women ready for their extreme close-ups?

The device revived ages-old vitriol and fear of the female organ. Women have been long socialized to see their lady parts as ugly and unclean—if they see them at all (when was the last time you grabbed a mirror to have a look?). Case in point: when I told my female friends I was writing about vagina selfies, most shuddered at the mere suggestion. “Nobody taught me my genitals were gross, but somehow I picked it up in the culture just the same,” says Elise Chenier, a professor who studies the history of sexuality at Simon Fraser University in Burnaby, B.C.. “Sex has been a subject of empowerment for men and shame for women.”

“It’s actually a vulva selfie,” corrects Chenier, when I call to ask her about vagina selfies. (Anatomy lesson: the vagina is the inner canal, while the vulva’s every- thing on the outside, including the labia majora and minora, and the clitoris.) There’s no cutesy nickname yet—Twat shot? Pussy pic? Velfie? Kittygram? Instavag? V-pap? Snatch snap? Vagelfie?—but the Svakom Gaga sold out within days of its release, suggesting there’s bound to be one soon. Vulva fear and loathing be damned.

Rebecca Harrison, a 30-year-old student in Toronto, tells me, “I just woke up and took one first thing this morning.” She snaps and sends about two a week to her boyfriend, who receives them while he’s at the office. They’re not for his pleasure only, she says. “I get off on these pictures too. It’s like lingerie. I don’t just put it on for him; I put it on because it makes me feel sexy.” Harrisons ends them only to her committed partner and deletes the images afterward—but exposure isn’t her worst fear. “If my vagina ended up all over the Internet, I’d be most upset that I wasn’t getting paid,” she says.

Your most intimate part may be the best one to shoot from an anonymity standpoint, because it includes far less context than a topless, duck-faced shot. This could be one reason women are cropping in closer.

Crystal Hutchinson, a 25-year-old model from Barrie, Ont., says she took her first vulva shot at 18 (“young, but legal,” she laughs) and sometimes sends them to boyfriends. “Vaginas are not all that good looking to me,” she admits, “but seeing it through a guy’s eyes is so different.”

“How so?” I ask. To answer that, she directs me to a lucky recipient of one of her pics. “Women are like flowers. There are so many different kinds, and they’re all beautiful,” he says, seeming genuine. He says he’s never once sent Crystal a dick pic, in part because she’s never asked and, in part because “there’s nothing pretty about a penis,” proving women don’t have a monopoly on body shame. Maybe that’s the bright side to all this private-part portraiture: psychologists say the fastest way to dissolve your darkest shame—vulvar, penile or otherwise—is to expose it to the light, so to speak. Well, here comes the flash. 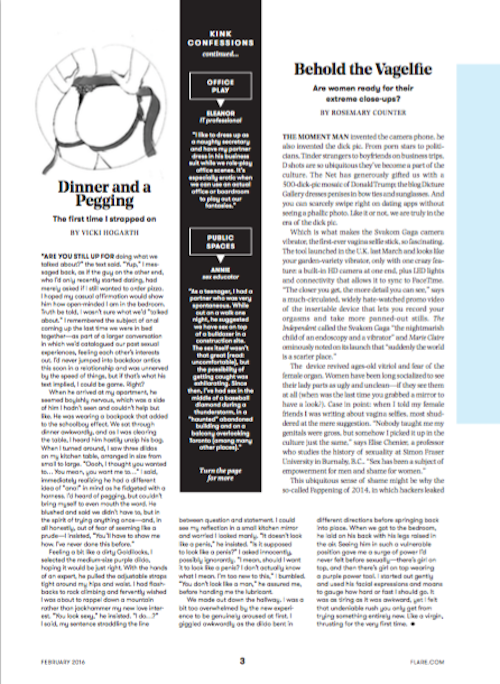 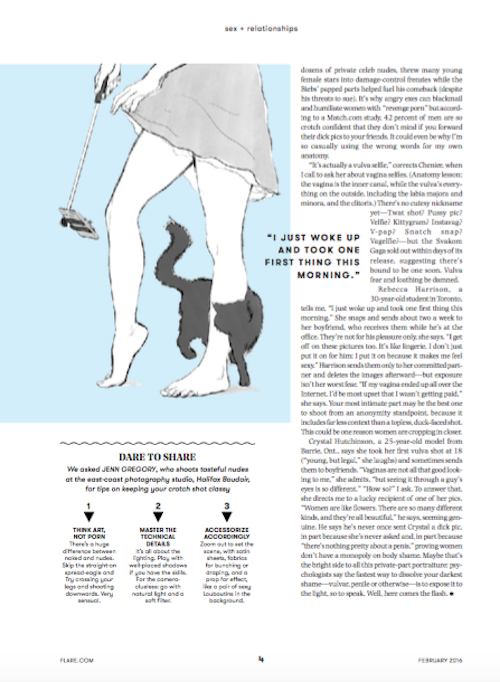