Being Cool with Uptalk?

So what if young hires sound like Lena Dunham?

Early in her first job in advertising, Gabi Pirraglia, then 25 years old, was taken aside by her boss. “She said it wasn’t personal, but I needed to work on the way I spoke,” says the Torontonian, now 29. Pirraglia, like so many Millennials, was prone to rising intonation at her sentences’ end, a speech pattern known as “uptalk” (“upspeak” and “Valley Girl voice” to some). “I was like, who, me?” she says, blissfully unaware of her habit. Like, not sure if you’ve heard, but lots of people find it annoying?

In recent years, many have critiqued the pervasive vocal habit—best exemplified by Alicia Silverstone in Clueless and Lena Dunham in Girls—as sounding vapid, ditzy and unintelligent. There’s no evidence at all that uptalkers are unprofessional or incapable, but research does show that they can be hindered by their speech patterns: Of 700 bosses surveyed in the U.K., 85% thought uptalk indicated insecurity or weakness, 57% said it can damage credibility and 70% found it downright annoying. “People assume you’re young, and probably dumb,” says Pirraglia.

And in order to be taken more seriously, many young people deliberately switch to a lower register, leading to an equally-controversial habit known as vocal fry, explains to Lorena Jessop, a professor of linguistics at Queen’s University. (Think the creaky voices of Zooey Deschanel or Kim Kardashian.) This, too, irks people.

But they ought to get used to it. As Millennials enter their peak earning years, uptalk and vocal fry are as likely to be found in boardrooms as they are at the mall. Irritating? Perhaps. But before handing out Toastmasters flyers, traditionalists should consider that such syntax is no longer the business-world liability it once was. In fact, underestimating young folks because of how they talk can put managers—and their companies—at a competitive disadvantage.

Why? Because young people have talents their older counterparts both lack and desperately need—especially in such uber-competitive sectors as marketing, retail and tech, where uptalk and vocal fry prevail. Failing to hire or promote someone because, in Jessop’s words, “the interviewer can’t hear past their voice,” cuts off an extremely rich vein of talent.

It can also become a legal liability. In corporate settings, open disdain for uptalk—or even more subtle decisions, like failing to hire or promote someone based on their voice—can be interpreted as age or sex discrimination, says Janet Salopek, a Calgary-based HR consultant. “If an organization is not promoting someone because the tone of their voice, and if their voice is linked to their youth or femaleness, that’s discrimination,” she explains, adding that a lawsuit on the matter could happen any time.

If intonation that is, like, totes unpro- fesh really is something that damages a business—say, by offending fusty clients—coaching is an option. Take Pirraglia, who was given training to sound more credible and confident. “My career is better for it,” she admits.

For now, at least. Because as the economy changes to accommodate the preferences of younger workers (and spenders), the language of business is evolving, too. It’s not productive nor progressive to retrain an entire generation for the sake of making the older generation more comfortable—especially when that generation was saying “groovy” and “far out” to horrified superiors not too long ago.

Still, it’s reasonable to expect some to cling to old ways. That’s why managers should listen for digs—both overt (“young people speak so awfully!”) and innocuous (“you sound just like my granddaughter!”)—and privately tell critics to ease up. And for those for whom uptalk grates, Salopek suggests keeping quiet about it. It’s, like, a whole new business language. I know, right? 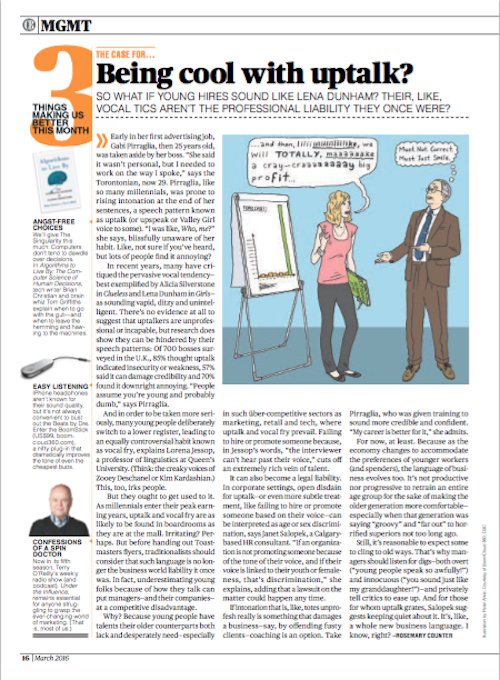