A big thing or a small?

The winner takes all is the best approach for spurring innovation, according to new research

Imagine you put a group of artists in a room and tell them, “We need you to be creative! Right now!” says Joshua Graff Zivin, economics professor at the University of California at San Diego. It probably wouldn’t yield great art, but it’s exactly how employers expect innovation to happen every single day. For years, Graff Zivin and his colleague Elizabeth Lyons, an assistant professor of management at UC San Diego, have been preoccupied by what drives innovation. “Why do people become innovators? What makes innovators better at innovating? Can anyone innovate, or are you either an innovator or not?” asks Lyons. Perhaps most interesting is the question of whether—or how—the process might be hacked. Asks Graff Zivin: “How do we create incentives to encourage innovation when it’s a wild uncertainty by its very nature?”

Looking for answers, the researchers paired with biotechnology company Thermo Fisher Scientific, which needed help with a real-world problem: creating software to help small health care clinics share medical equipment. The researchers invited non-management employees from the company and nearby tech firms to tackle the challenge. (Participants weren’t told the exact problem until go time.) They could choose to work alone or in small teams; $15,000 would be up for grabs as a prize.

Here’s the catch: The 132 participants were split into two groups. One was vying for a $15,000 winner-takes-all top prize. The other group was offered more modest prizes for the top 10 ideas. Once they knew the prize, they could determine what level of effort to put into the submission. Would innovators try harder for a juicier but less likely payday? Or would the longer odds discourage people from completing a submission? “This is what we were really observing,” says Lyons.

The results surprised both researchers. “We expected fewer submissions from the winner-takes-all groups, because the chances of winning were so much lower,” says Lyons. But the number of submissions was roughly equal (20 and 22). Knowing they were less likely to win made participants less intimidated, Graff Zivin speculates. “Since there’d only be one winner, we actually destigmatized failure,” he says.

Entries were judged by a panel of six (three from the industry and three from academia) and evaluated on a scale of one (idea not novel; already on the market; do better next time) to five (a brand new, very impressive idea). Groups actually outperformed individuals in both categories, likely because they were able to draw on diverse skill sets. But teams in the winner-takes-all model performed the best. Furthermore, participants were surveyed on their risk tolerance, with those most willing to take chances performing best in the winner-takes-all contest.

The moral of this story? Getting more innovation happening at your workplace might be as easy as throwing some money at the problem. When searching for an outside-the-box solution, a winner-takes-all competition could be the best way to get latent risk-takers to make the needed leaps. While you’re at it, giving closer and careful consideration to human psychology can help companies overcome barriers to innovation.

“Talent and ability are extremely important,” notes Graff Zivin, “but put the most talented person in the world in an environment where the incentives run counter to creativity, and they’re not going to be creative.” If you put a group of artists in a room, you cannot just demand creativity. You can, however, provide all the necessary tools, remove unwanted distractions and offer incentives for those who deliver results. “In a world where you want innovation, you not only want to remove unnecessary roadblocks, but you want to think deeply and thoughtfully about incentives.” In short, a fat cheque won’t hurt one bit. 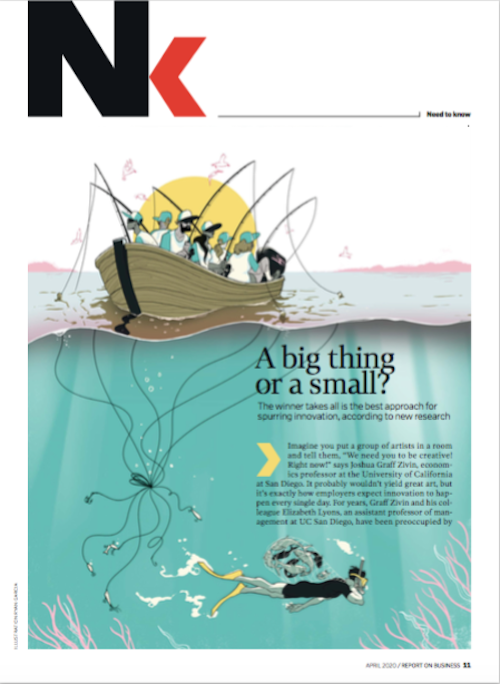 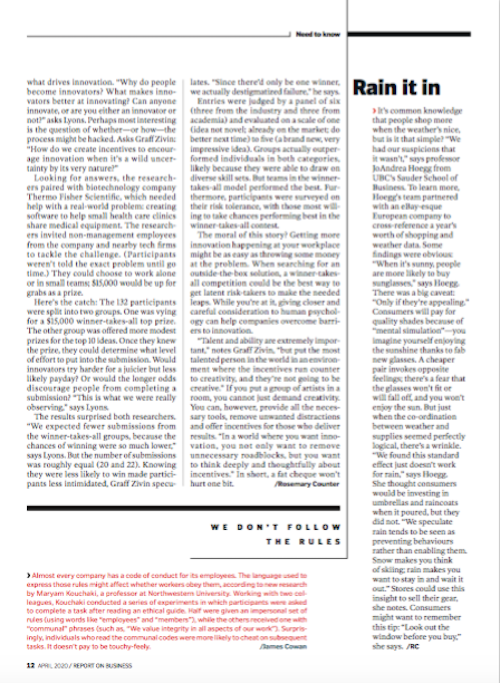