From the black market to the Ivory Tower

Marijuana legalization creates a need for 150,000 new workers, from growers to retail clerks. Colleges plan to train them.

Every country in the world will be watching and scrutinizing what happens to the Canadian market after marijuana is legalized. “Canada is going to lead this industry globally,” says David Purcell, director of emerging business at B.C.’s Kwantlen Polytechnic University.

With legalization, a whole underground industry is set to become legit; Statistics Canada says $5.7 billion was spent on cannabis last year, making it a bigger sector than alcohol or tobacco. Up to 150,000 new workers—growers, sellers, store managers, retail clerks—will need training. Canadian post-secondary institutions will respond with new classes and programs to meet new market demands. But how do you build a cannabis curriculum on short order? And how do you fund reputable teachers, given many experts likely gained their wisdom while growing an illegal product? By necessity, colleges and universities are getting creative in their search for talent.

In September 2018, Niagara College Canada launched what some call the country’s first post-secondary credential in commercial cannabis production. Twenty-four students—including Ph.D. candidates, scientists and engineers—were selected from more than 300 applicants to learn best practices for growing marijuana. The program is organized around three core fundamentals: large-scale crop cultivation, legal issues, and business fundamentals. (For the record, no cannabis will be consumed.)

Though the program has been touted as brand new, Niagara College’s two-year greenhouse technician program has been training growers for three decades—including licensed pot producers. “A couple of years ago, it became clear that the sector was looking at cannabis production in a more substantial way because more people were using it medi- cinally,” says Al Unwin, associate dean at Niagara’s school of environmental and horticultural studies. A college needs to respond to future labour market demands, he argues, so the school quietly added lessons on pot production to the curriculum three years ago.

All teachers were and are legal producers. “We’re not going to employ anyone who’s been illegally producing cannabis—that’s very important,” says Unwin. (Instructors require criminal-record checks through the RCMP.) The new program includes two profs from the horticulture program who enhanced their extensive plant knowledge with two years of cannabis-specific training. Producers from the industry have also been brought in to teach part-time. Unwin admits academic staff weren’t easy to find: “Trying to coax someone to teach a course—let alone take on a full-time professor position—is challenging, for sure.” It seems few industry bigwigs are interested in teaching, and few professors are interested in pot.

It’s a familiar problem for Purcell at Kwantlen, which just launched a cannabis career training program. Like Niagara College, Purcell’s school quietly offered a few years of cannabis programming that’s now been incorporated into a series of non-credit, 13-week online courses. Among the school’s offerings are courses focused on plant production and facility management as well as nancing a cannabis enterprise in Canada. But unlike at Niagara College, enrolment isn’t limited to students with impressive degrees. “We recognize the need for accessible training and we want this to be as accessible as possible,” says Purcell. When demand in the last few months surged past the available 35 spaces, Kwantlen added concurrent courses to their roster; about 1,500 students have completed courses so far.

Luring cannabis professionals away from far more lucrative day jobs is proving to be a challenge. “I think it’s more a question of time than money,” explains Purcell. “These are busy people working 60 hours a week, so finding another 10 to 15 isn’t easy.” Even keeping the courses current is an issue. “We’ve updated these courses multiple times already just because of regulatory changes and how quickly this industry is moving.”

As such, Purcell’s more open to embra- cing formerly illegal producers—it’s not only necessary, but perhaps inevitable. “Ask the legal licensed producers out there where their growers came from. Most are from the illicit market, at some point, even VPs and head growers. But these are responsible, ethical growers that want to grow legally,” he says. He hopes Kwantlen’s program, and others like it, will combat lingering stigma. “We’re breaking down these stereotypes with evidence-based education. We’re the anti-reefer madness.”

To support his mission, and to help train enough professionals to support the coming legal market, Purcell has formed partnerships with other colleges and universities to share curriculum content. Ontario’s Loyalist College is employing Kwantlen’s course material via distance education. Camosun College in B.C. is offering their course in growing cannabis for professionals, as is College Boréal in Toronto, which launched its cannabis production technician program in the fall of 2018. Universities, too, are adjusting their course offerings to Canada’s new laws, albeit more slowly. Mount Royal University in Calgary offered three online courses in September 2018; Dalhousie University will do the same in Halifax in the spring; and the University of Ottawa will launch a two-week crash course in cannabis law beginning in January 2019.

“It’s new for everyone, including us,” says Joël M. Dubois, a partner at Perley-Robertson and the instructor heading the coolest new class at Ottawa’s law school. Guest speakers include immigration, real estate and business lawyers to discuss how legal weed might impact other areas of law. The course is sponsored by Dubois’s rm. He’s mostly there for the legal thrill. “We haven’t seen the law face such drastic change since Prohibition,” he says. “Lawyers and future lawyers have to educate ourselves to answer all kinds of questions.”

But lawyers-to-be are only a small slice of the would-be workforce, which will include entry-level, frontline employees looking to carve out a career in cannabis. At the College of the Rockies in British Columbia, a brand new cannabis retail specialist program combines science and customer service. “We want to make sure that frontline workers can say, ‘Here are the things to be aware of, here are the facts about cannabis and its effect on the body,’” says instructor Carmen Rockwell-Hoover. In partnership with local growers, the college’s herbalist program is shifting toward cannabis. Twenty students were selected out of 60 applicants for the inaugural course, which will run four times a year. Students focus on increasing their product knowledge of various strains to improve recommendations to the client. They also complete a 40-hour internship at local dispensaries.

Campus manager Kim Garety also faced difficulties in finding and securing instructors. “Where are the experts in this field? Since it’s very much a grassroots thing, there’s no official expertise in this area. We’ve been very, very selective of who we’ve chosen to be involved,” says Garety. She got lucky with Rockwell-Hoover, a chartered herbalist and certified aromatherapist with 30 years experience in natural health as well as extensive involvement in the college’s practical herbalist program. Rockwell-Hoover has trained about as officially as possible through the Cannabis Training University in Colorado. And while recreational pot smok- ing might be frowned upon by academia, Rockwell-Hoover is a breast cancer survivor who endured five years of chemo thanks to legal cannabis consumption.

As fun as weed class sounds, Rockwell-Hoover and all other pot professors face a big task in conceptualizing their classes, keeping them current alongside rapid legal change, and teaching and training their students to run the cannabis industry properly. There’s little margin for error, especially beneath a global microscope, but Canadian schools and eager students are equally ready to try. 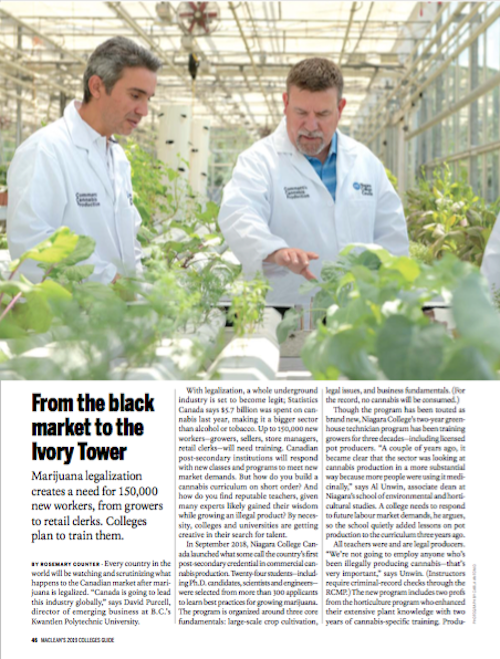 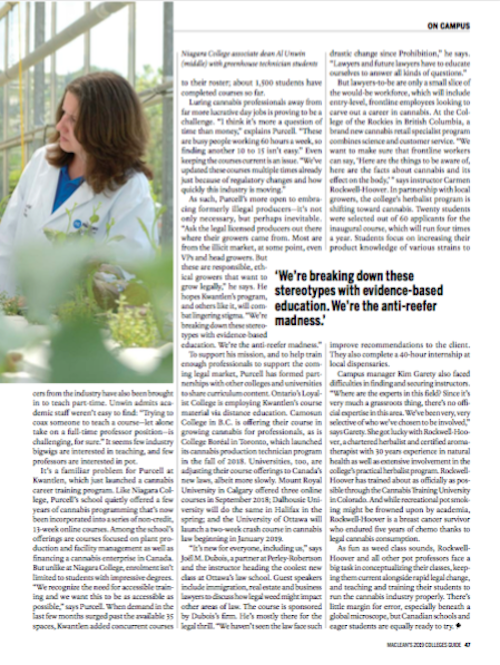