Predicting the hottest sights, sounds, smells and tastes of 2019

Sight: Bright, happy hues to distract from the looming apocalypse

Anyone painting their bathroom might want to consult the Pantone Color Institute. Every year, it looks at the hues marching down catwalks at New York Fashion Week to tell the rest of us what shades will be trending next—and what they say about the current culture in fashion, marketing, social media and even politics. (2018’s colour of the year, Ultra Violet, a mystical and majestic purple bright enough for a court jester, was said to predict a cultural renaissance.) The 12 shades currently in the running for colour of the year (which will be announced in December) are “confident, uplifting, joyful hues,” says Pantone executive director Leatrice Eiseman. Among the contenders are Aspen Gold (for “brightening our day”), Mango Mojito (that “feeds our craving for pleasant comfort”), Pepper Stem (an olive green that “encourages our desire for nature’s healthy bounty”) and a whole lot of regal reds. “From a psychological standpoint, when you look at what the colours mean, the hotter colours, particularly in the red family, are all about empowerment,” says Eiseman. But not all colour specialists are so optimistic: Benjamin Moore’s bleak pick is Metropolitan, an “effortless shade of gray” with cool undertones; Behr chose Blueprint, a moody mid-tone blue to match your looming dread; and Sherwin-Williams went with Cavern Clay, the dry terracotta orange of a desert wasteland.

Carly Rae Jepsen will have an album next year. So will Missy Elliott, Avril Lavigne and Megadeth. But will you be able to hear their hot new tunes? Following a model established by Netflix, music-streaming service Spotify might start wooing performers to create content exclusively for its platform, according to MIDiA. The British research firm suggests Taylor Swift is a possible target for Spotify in 2019, but the company will likely want to build an entire “first team” of artists. In the long run, the music service could rely on cultivating its own artists and branching out into podcasts, but right now, it will likely seek out existing stars. Unless, of course, it can hire a computer to craft a hit single. Artificial intelligence is increasingly being used to compose music, with mixed results. Taryn Southern, a singer who found fame on YouTube, uses AI so ware called Amper to create backing tracks, while Skygge, a French music collective, released a 15-song album of delicate melodies written through AI. But when machine-learning researcher Soroush Mehri fed songs by the band Nirvana into AI so ware, “the first thing it did was scream about Jesus,” he told the Guardian. Could the big hit of 2019 be a collaboration between Swift and a robot? You’ll need to subscribe to Spotify to find out.

Head to the city’s swankiest department stores to try to nab a bottle of Givenchy’s L’Interdit— that’s French for “forbidden,” an apt descriptor given reports that it’s sold out three times since its September launch. A whole lot of women will be gifted L’Interdit this Christmas, so the rest of us can expect 2019 to be filled with the perfume’s woody floral fragrance with orange blossom, jasmine, tuberose, vetiver and patchouli. Maybe you recognize the commercial: impossibly glam Rooney Mara grabs her bottle and ditches a posh soiree for the scuzzy Paris subway, where she finds a way cooler party and pulls the best-looking all-nighter you’ve ever seen. “Forbid yourself nothing. Allow no rules,” says the tag line. “An invitation to defy convention and embrace your singularity.” The latter is especially ironic given that the rose- and violet-heavy original was created in 1957 for Audrey Hepburn—the very first time an actress became the face of a perfume, but by no means the last.

Surprise, surprise: right atop THP’s 2019 Flavour & Trend Forecast—the Toronto content studio’s annual report of the coming year’s hippest ingredients, cooking techniques and culinary ideas—is cooking with cannabis. Given that it’s now legal in Canada, it’s no shock that pot in food form is moving way beyond brownies. Netflix’s show Cooking on High and Viceland’s Bong Appétit featured recipes like Tandoori toke fest, budcakes and high Thai food. (Looking for an easier option? Ditch olive oil for infused “canna oil” and use with just about anything.) A dash of the munchies might help with THP’s other, less appetizing 2019 trends like seaweed (set to be the next big superfood), mushrooms (the second-biggest superfood added to smoothies and coffee) and octopus (said to be on the slithery move from restaurants to home kitchens). The trendiest cuisine is Peruvian, especially ceviche, and the must-have kitchen gadgets will be anything and everything smart: crock pots you can program by phone, smart stoves that adjust their own temperature and even smart plates to help you with portion control—which might be extra helpful if you used the canna oil.

Alongside the always-fashionable animal print, a lesser-seen texture graced the stages at fashion week: feathers, with fringes and ruffles, but mostly feathers, feathers and even more feathers. Fuzzy fashions included a fluorescent-pink Gucci boa; a satin pantsuit with baby-blue feathered lapel from Loewe; and from Marc Jacobs, a three-tiered feathered gown (in Big Bird yellow, to make sure you get noticed). Excess, a.k.a. “maximalism,” is in this season, and Yves Saint Laurent is leading the way in feathered footwear dubbed “yeti boots.” Valentino showcased feathered bucket hats, and Dior models wore jackets with hand-dyed feathers teased into fabrics. But feathers are the biggest deal in bridal, of all odd days to don feathers, where Vivienne Westwood and Inbal Dror both used ample plumes. Vogue called feathers the “sexy superstar of the season”; Tatler described them as “fancy, fun and flirty”; and the Independent declared that “precious plumage is here to stay” (for spring and maybe summer, they mean). The rest of us might try the season’s least-wearable trend as a fringe on dress hems, cuffs and purses. 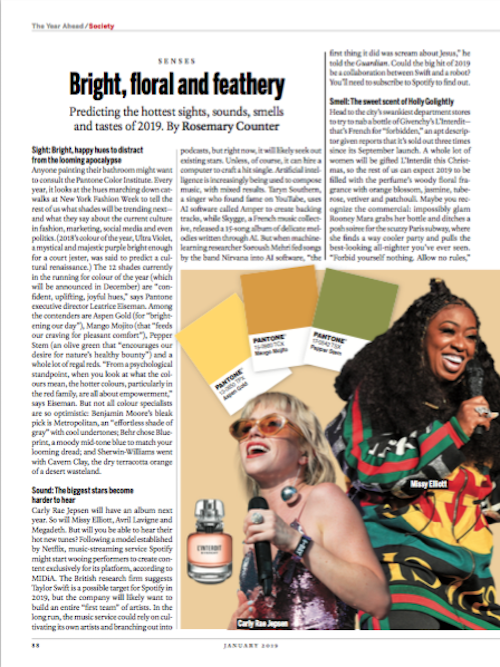 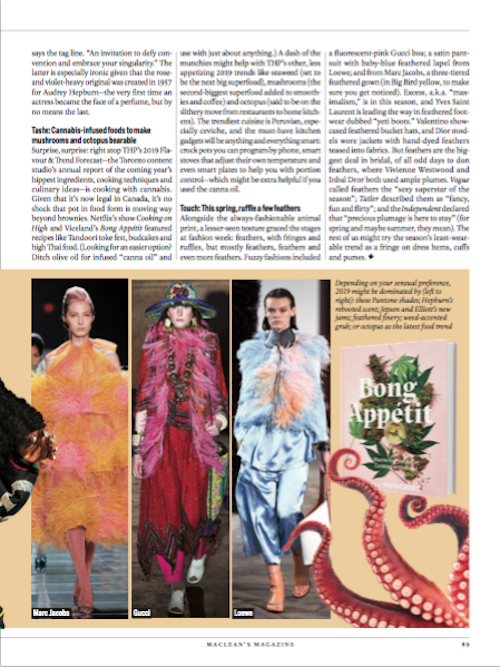