Canadian rock star Bryan Adams – a talented lensman with several photography books under his belt, and whose work has graced our pages as well as those of Vogue, GQ and Vanity Fair – was commissioned to shoot the 48th edition of the iconic Pirelli Calendar. “The Cal” used to be racier, featuring semi-naked and naked female models, but the modern incarnation is more conceptual, with Peter Lindbergh taking Photoshop-free portraits of natural beauties in 2017 and Annie Leibovitz shooting distinguished women in 2016. Adams’ calendar, called “On the Road,” captures his vision of an entertainer’s itinerant life, touring from venue to venue, something he’s been doing for the last 45 years.

The magic happened over just three days in June and July, on the Italian island of Capri, and in Los Angeles at the 110-year-old Palace Theatre and the Chateau Marmont, with 12 singers, including Iggy Pop covered in sparkling silver paint, Cher trailing a red lipstick along a mirror, Jennifer Hudson peeking shyly from behind closed curtains and Rita Ora wearing stilettos in a tub.

The Italian tire company will print about 20,000 calendars in hardcover book format, and give them out as corporate gifts. While you likely won’t see Adams’ creation, you can still catch him in Vancouver for a New Year’s Eve party before, once again, he’s on the road to Europe for his 2022 So Happy It Hurts tour.

Here, the 62-year-old rocker answers Zoomer’s questions about the Pirelli calendar and the photo shoot:

ROSEMARY COUNTER: How did the opportunity to shoot the Pirelli calendar come to you?

BRYAN ADAMS: Basically, I’d presented an idea to them titled “On the Road,” and they loved it, especially as this is their 150th anniversary of 150 years on the road. I felt it was what their company is all about, and it was the one thing musicians couldn’t do during the pandemic.

RC: What were your initial feelings about taking on this project?

BA: Hugely exciting, and challenging, because the Pirelli calendar of topless supermodels is gone. So I needed an angle that would carry it as an art project and, as such, this year’s calendar will be a book, and a kind of visual diary of what it might be like on the road in different tour scenarios: backstage, hotel, tour bus, bathtub and a few others. I’ve done a series of self-portraits in a car, too.

RC: How is taking a photograph and writing a song similar?

BA: I get asked this a lot, and perhaps the best parallel might be that both start with nothing, and at the end of the day, there is something new and original.

RC: Does being a musician make you a better photographer?

BA: For me, one helps the other, you know: A change is as good as a rest! Making photos is an escape from my usual world of music and touring, and it’s an amazing creative release. It helps glue what I do together, that’s for sure.

RC: Pirelli calendars have been shot by legendary photographers Annie Leibovitz, Tim Walker and Norman Parkinson. Who inspires you and informs your own work?

BA: I couldn’t possibly say. I loved all of those calendars a lot. But no two photographers are the same.

RC: Which photograph are you most proud of in the 2022 calendar? Tell us how you got it and why it’s your favourite.

BA: Well, again, it’s hard to say! The cover of the calendar is St. Vincent with a guitar pick on her tongue, and this image sets the tone for much of the rest of the work. I was thrilled when Pirelli liked it, too, as it’s quite provocative. The pick was in my back pocket waiting for the right person to try the idea, and St. Vincent was the right moment. She’s a great guitarist, so it made perfect sense that she was the one for the image.

RC: You are the first Canadian photographer to shoot the calendar. How did you put a Canadian touch on a 48-year-old Italian legacy?

BA: By keeping it real, of course! The people in the calendar are mostly well known, and the scenarios are familiar but unusual. It’s a slice of road life with a touch of fantasy. I hope everyone enjoys the ride. 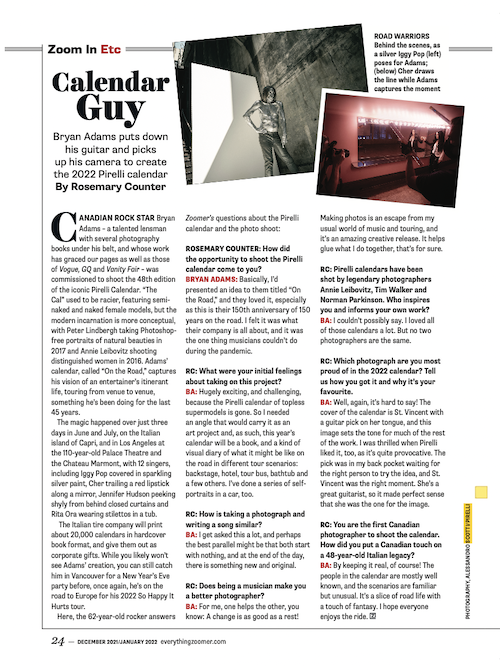