While most of us won’t ever be good enough at anything to compete in London’s Olympic Games, that’s not to say we’re not playing the dating game. Which is why, just in time to get you in the spirit of competition, Match.com has released a new survey of singles’ dating behaviour. Three thousand singletons from Canada, the U.S., France, the U.K., Australia and Japan are set to go head-to-head. Ready? Set? Go!

In our corner we’ve got the Canucks, gold medal winner of fearless females. A confident 63% of Canadian woman have asked a man out on a date (sliding in just past the U.S.’s 62%; bronze goes to the Brits at 58%).

We Canadian broads make for a pretty laidback date — we’re the most likely nation to date outside our political beliefs, eh? — but we’re not dating nearly enough. About 76% of American singles have gone on two dates or more last year, compared to 70% of Canadians. (Just two? C’mon ladies, do more asking!)

Ah, shmoop: a majority of singles in all participating countries believe in love at first sight. The most romantic? The Japanese, where there’s an 82% chance you’re sitting across from a hopeless romantic. France is the next biggest believer in l’amour, followed by the Canadians. The U.K., it seems, is home to realists — just 58% buy into the fantasy.

Ladies from the United Kingdom are buying something though — their own dinner. Far more than other countries, 52% of them go a full splitsies by offering up their Visas on alternating dates. Only 29% of Canadian women do the same. But for all the men raising their eyebrows at the moment, some perspective: 27% of French women said they would never ever pick up the cheque. Sacrebleu!

But if you think grabbing the tab is a fast train to a French kiss, you’re wrong. The survey found the French would rather take things slow. Very slow: 52% would rather wait until they’re in an exclusive relationship before their first kiss. It’s Aussies who are most likely to kiss on a first date (39%, and no judgment), while neutral Canada would rather smooch away on the second (70%).

We also like to take it slow — the very slowest — when it comes to shacking up; Canadians of both genders are the absolute last to give up our solo living arrangements. Just 31% of commitment-phobic Canucks are willing to abandon our bachelor(ette) pads within one year of dating, while a full 59% of Japanese singles are willing to share their space.

One point worth noting though — the survey found Southern Europe is home to the hottest singles on the planet.

And so, the winner? I’m a little biased, but find me cheering for Canadian women all the way. We ask men out, don’t kiss too quickly or fall too hard, and won’t be redecorating your apartment anytime soon. Go Canada! 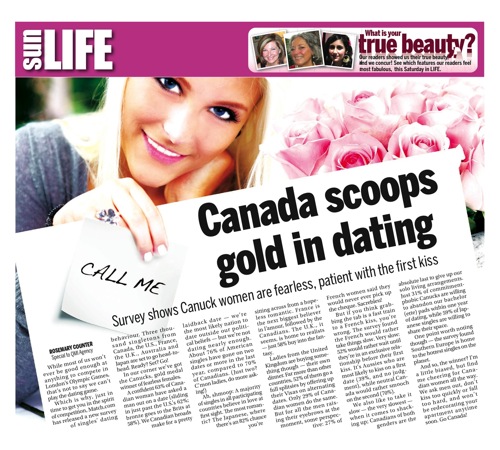