A young woman, slender and stylish, holds three oversized designer purses. Three more sit at her feet. Pouting her lips, she snaps a self-portrait in the mirror. She then uploads it to Instagram—the ubiquitous online photosharing service recently acquired by Facebook—with the cheeky caption, “Can’t really decide which Birkin to use today.”

But among the 80 million Instagram users sharing the minutiae of their lives, there lurks an opportunistic voyeur. Since July, an anonymous blogger has been trolling the Instagram site and uploading copied images of lavish lifestyles to Rich Kids of Instagram (a.k.a. RKOI), a Tumblr sensation that has hooked online followers with its sly blend of envy and mockery.

“Anonymity feels good and is in our best interest,” the site’s incognito creator(s) write via the RKOI Gmail account. The Tumblr was born after some boozy online spying on the lives of the uber-wealthy. “Everyone enjoys peering into a window of a world that’s not theirs,” (s)he writes. “Some love it, some hate it, but they keep coming back to it.”

RKOI’s creator has no trouble coming up with content or captions—the site receives hundreds of submissions each week, and its subjects’ comments are sufficiently smug to stand on their own. Recent not-so-humblebrags include a snapshot of a $42,000 bar tab (hashtagged “Balliinnn’ #bottles #alcohol #rkoi #richass #cashmoney”) and a pose in front of a sleek yacht (“How else do u expect to get around in the Hamptons??”).

The young man lounging on the yacht happens to be Tom Ierna, a 19-year-old aspiring entrepreneur from New York City who spends his summers on Long Island in the Hamptons. A week after the first image appeared on the RKOI site, another of Ierna’s snapshots—of a $9,000 gold-plated AK-47 he spotted in the window of a store—popped up, but he only found out when journalists contacted him for interviews.

“I didn’t really care, but I thought it was an invasion of privacy,” says Ierna, who received mostly laughs from friends, but also some snarky online feedback. “Bet you could’ve fed soooooo many starving children,” offered one commenter. Ierna, whose grandfather owns plenty of real estate and runs a large company, didn’t read most of the comments, but he did learn a lesson: “It did make me rethink what I post for security reasons.”

Alexa Dell, the 18-yearold daughter of Dell CEO Michael Dell, posted a picture of her brother aboard a private plane to Fiji that soon appeared on the RKOI site, after which she promptly deleted all her social networking accounts. The Brant brothers, sons of Interview publisher Peter Brant and model Stephanie Seymour, recently posted photos of an elaborate banquet at the Venice Film Festival with this caption: “Just a light snack with friends. #nbd #feast #decadence.”

When you’re as rich as these kids, announcing your exploits and whereabouts can pose security issues. A site like RKOI is rife with potential legal problems—specifically invasion of privacy, defamation of character and copyright infringement, says Dalhousie University law professor Robert Currie, director of the Law & Technology Institute in Halifax.

That said, a successful case for anything but copyright would be difficult, he suggests. “The courts might say, ‘Dude, you posted this picture yourself! You put it somewhere with no reasonable expectation of privacy.’ ” RKOI will take down any images if asked, but says such requests are rare. In this age of oversharing, it’s clear showing up on the site is just something else for the moneyed set to brag about.

“Some of these kids are too daft to be aware of the public reaction, while some of them revel in it,” says Currie. Those who click through the site daily are just as culpable in the online fame game—RKOI might be holding up a mirror to the ridiculous aspects of wealth, but also to the daydream aspirations of everyone else. “We’re playing right into the desires of these kids,” says Currie. “This says so much about the people in the photos, the people who post the photos and, yes, the people who look at the photos.” 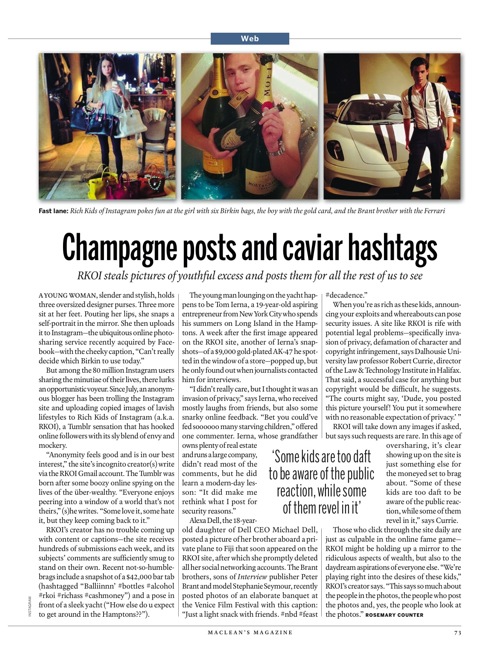