Margaret Kenequanash has been a fierce advocate for First Nations communities for more than 30 years. The first female chief of the North Caribou Lake First Nation in northern Ontario (about 320 kilometres by plane due north of Sioux Lookout) has held positions across many industries, from health to finance to education to community development. Her latest and most ambitious endeavour is Wataynikaneyap Power, an 1,800-kilometre transmission line that will deliver reliable electricity to remote northern communities that desperately need it.

These nations currently depend on diesel-powered generators, which creates a host of problems both for the communities that use them and for the planet. The largest generators in use are just one megawatt, and most communities are already operating at maximum power capacity. So when they inevitably surpass the load restriction, the generator fails and the whole community’s power goes out. “In the summer, this affects our food and water. In the winter, our elders and children are in danger,” says Kenequanash. Plus, diesel is dirty: Burning it produces 40% more CO2 than natural gas, and the impact of a spill during the trip north (often on ice highways) could be catastrophic to local waterways and land. It’s prohibitively expensive, too. Connecting remote communities to the electrical supply would save roughly $1 billion over 40 years.

Enter Wataynikaneyap Power, which translates to “line that brings light” in Anishiniiniimowin. It’s a partnership between 24 First Nations communities and St. John’s–based electric and gas holding company Fortis Inc. (the former have a 51% stake, the latter 49%, along with several private partners). Its mission is to help First Nations communities eliminate diesel power by connecting them to the provincial transmission grid, bringing stable electricity to 20,000 people. It will also help cut millions of tonnes of GHG emissions.

Connecting these communities has been a priority for decades, but the project didn’t really get going until Kenequanash came on board as CEO five years ago. “I’m always struck by Margaret’s tenacity and focus on getting the project completed according to the principles set out by the 24 First Nations partners,” says David Hutchens, Fortis’s CEO. “Her sense of vision and leadership is always present.”

Under Kenequanash’s watch, some 1,600 transmission towers have been installed since 2019, and 70% of the right-of-way has been cleared for 3,000-odd more. COVID-19 admittedly affected progress, as have the effects of climate change and rampant wildfires. But she isn’t losing sight of what’s at stake for her people—and it’s not just a lightbulb. “Think about if you lived in a sandbox and there’s power in the sandbox but nowhere else,” she says. “Work and business can only happen in that area. That’s very restrictive. In terms of community development, it stops most of it.”

Kenequanash has the sometimes complicated job of liaising between the corporate energy world and First Nations communities (including her own), which she describes as “a little like putting a square into a circle.” But procrastination is no longer an option. “Indigenous people can’t sit and wait for reliable energy’s arrival,” she says. “We need to be involved in the major infrastructures that are happening in our homeland. We need to have a say in our communities and our future generations.”

At least in this corner of the world, Kenequanash is the one advocating on behalf of Indigenous communities. “My job,” she says, “is to deliver those messages to make careful and responsible partnerships that bring about real change. I’m trying to get each to understand the other so we can both move forward.” This year promises to be particularly rewarding, she adds, when the substation in Pickle Lake goes active. Among the many nations that will finally be connected is her own.

If you’ve never sat through a law class, here’s the answer to most of the questions that get asked: “It depends.” Needless to say, it can be a frustrating and not overly helpful response. “Well, of course it depends!” says University of Toronto Law professor Benjamin Alarie. “On what? To what extent? It can be a lazy response dressed up as a sophisticated one.”

In the lawyers’ defence, however, law can be a slow-moving, precedent-based industry where verdicts are indeed based on small differentiating details. Alarie is convinced it doesn’t have to be that way, and when he was promoted to associate dean with tenure in 2011, he found himself in a unique spot to make real and immediate change. First, he revamped the grading process. Next, admissions. Finally, curriculum, which hadn’t seen a major change since the 1970s and might not get another one for a very long time. “It became clear we were designing curriculum not just for 2012,” he says, “but for 2050 and beyond.”

What the law might look like a century from now is anyone’s guess, but if you had to gamble on something, you’d be wise to bet on technology. “With the understanding that computing power will continue to grow exponentially, I was awestruck by the potential of machine learning and AI algorithms for law,” he says. When Alarie’s post as dean ended, and with some time off to enjoy, he partnered with two like-minded U of T colleagues—Anthony Niblett and Albert Yoon—to build an algorithm that predicts a judge’s likely ruling in advance.

Now reconsider that canned “It depends” response. What if all factors could be considered, the answers plugged into the software, and a prediction made of a judge’s likely ruling? “If I could tell you, as a lawyer, there’s a 96% chance we’re going to win this case, then the other lawyer knows 4% is not worth fighting for,” says Alarie. Moreover, the software steers you to similar cases, ranked in order of statistical similarity. “Our algorithms help lawyers make decisions about when and how to proceed, and over time, there will be fewer slam-dunk cases clogging up the courts.”

Blue J Legal launched in 2015, focusing its predictive software on tax law—Alarie’s personal expertise. Two years later, and having expanded to include employment law, it launched commercially. As an American version currently rolls into the U.S., all the big accounting firms across Canada are now using Blue J, as is the federal government. But where Blue J could sell a premium product only to those who can afford it, it’s instead committed to making the software accessible to those who need it most. “We provide the platform to legal aid and pro bono organizations to give access to low-income clientele, too,” says Alarie.

The accuracy of his software is already over 90%, and as new cases are added to the system, that number could increase. “Blue J could make everyone’s job in this field easier,” he says. “Except judges—judging will probably become a lot more challenging.” 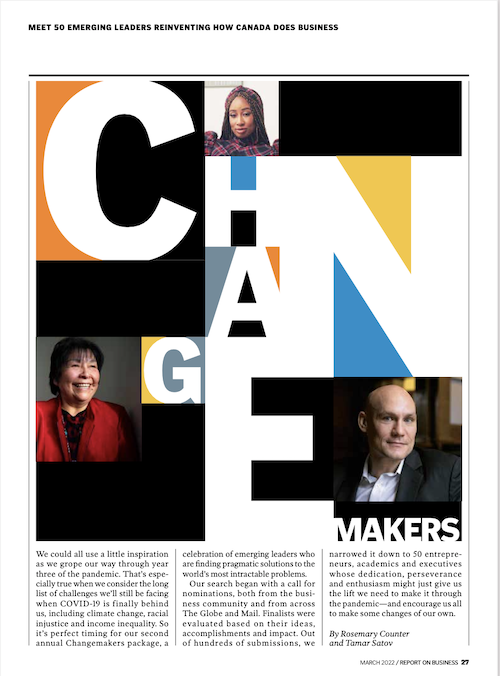 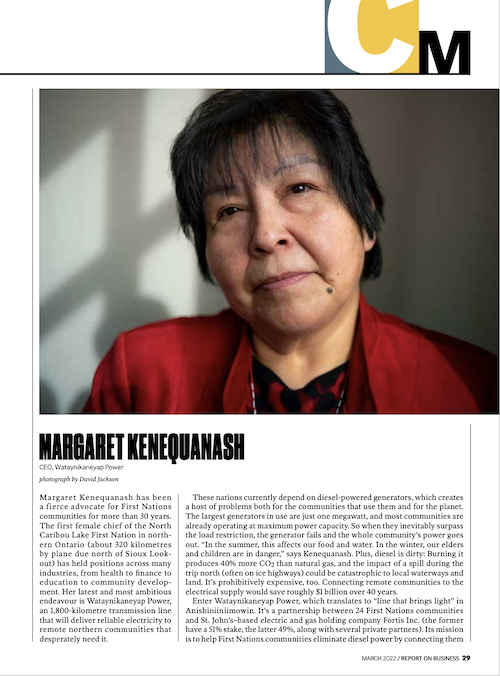 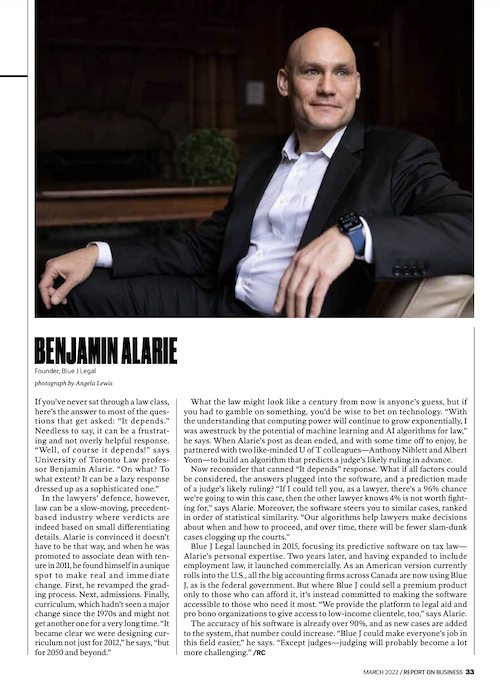