Your ship has come in

At 7:35 a.m. sharp, whether on land or at sea, 144 students of the Canadian Coast Guard College in Sydney, N.S., meet for morning divisions. Dressed in their uniforms—dark pants with a blue shirt, epaulets stitched to their shoulders— they sing O Canada, eat a quick breakfast and split into groups: Students take either navigation or marine engineering in English or French. Classes start at 8 a.m. and run until five.

During the sea phase, which students must complete twice during their four years at the college, cadets spend seven months on a Coast Guard boat. “It was the hardest thing I’ve ever done,” says Mariah McCooey, a navigation officer who graduated in 2011 and is now a communications officer with the Department of Fisheries and Oceans. Stationed on the Louis S. St-Laurent, the country’s largest icebreaker and flagship of the Canadian Coast Guard, there were perks, too. “You see polar bears, whales of all kinds, walruses. You see landscapes most people will never see.”

It’s the promise of adventure that draws many to the Coast Guard, says executive director Louis Guimond, a graduate who spent 34 years at sea. “If you like travel and experiencing new things, this is a great way to do that. But if you like familiarity and being in your own environment, it might not be the place for you.” Of 64 new students admitted each year, a third will fail academically and a handful more will leave for personal reasons. “Some people find being away from their family and support system just isn’t for them. It’s not a lifestyle they want.”

Established in 1965 to remedy the shortage of Canadian mariners, and expanded in the 1990s to include electronic technicians, radio communications and environmental responders, the college is about to celebrate its 50th year.

Still, its existence is largely unknown to would-be students. “Not many people even know it’s an option,” says Katie O’Leary, a 22-year-old from Trenton, Ont., who’s studying to be a navigation officer. While browsing for programs during her post-high-school gap year, O’Leary found the college online. “It seemed perfect, almost too good to be true.” The four-year navigation program offered both a certificate from Transport Canada (good on any ship of any size) and a bachelor’s degree from Cape Breton University. The Coast Guard guarantees employment after graduation, its pension plan begins on the first day of classes and—this is the too-good-to-be-true part—it’s all free.

“It’s a completely paid-for education,” says McCooey, “and I mean absolutely everything: They put you up on campus, they feed you and buy your books, then you come out with a degree and a job.” The 30-year-old from British Columbia stumbled upon the program through word of mouth.

For other students, serving the country is a family tradition. “My dad’s in the Canadian Forces, through the Royal Military College, and he suggested something similar for me in the Coast Guard,” says Guillaume Auclair, a 24-year-old marine engineering student from Quebec City. “It’s similar to the marines, in that room and board is free, but this is a lot less military.”

Qualifications, both academic and physical, are high. Classes include electro-technology and applied mechanics, both dense with physics and math, as well as technical writing, maritime law, nautical astronomy, phys ed and leadership and conflict resolution. “On a ship, you can’t run away from people,” laughs Auclair, one of five students in the French stream of marine engineering. “You have to be able to work together, even if you don’t always get along.”

Unlike the anonymity offered at larger universities, students at the Coast Guard get to know each other well, whether they want to or not. “We live together, eat together, sleep together,” says O’Leary of her class of 16. “You almost don’t even notice how close you get over the years.” So O’Leary was happy to have her own room during the second-year sea phase spent off the coast of Newfoundland. “I was lucky to get my own cabin, and it was pretty big, actually,” she says. “Bigger than my dorm room at the college, in fact.”

The promise of adventure draws many to the Coast Guard, says Gui- mond. But living at sea for extended periods of time is hard, and not all grads spend their whole careers on the water. “Will I work here for the rest of my life? Yes, absolutely,” says Auclair, who’s graduating this year and looking for- ward to life at sea, at least for now. “Will I be on ships the whole time? I don’t know.” If and when grads tire of a life of adventure, they’re also qualified for a desk job. “You can apply for one of many government office jobs within the Coast Guard,” he says. “Your shop expertise is good on land, too.” 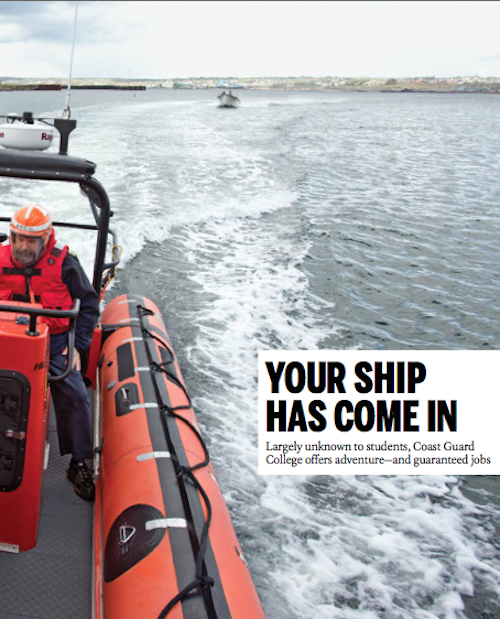 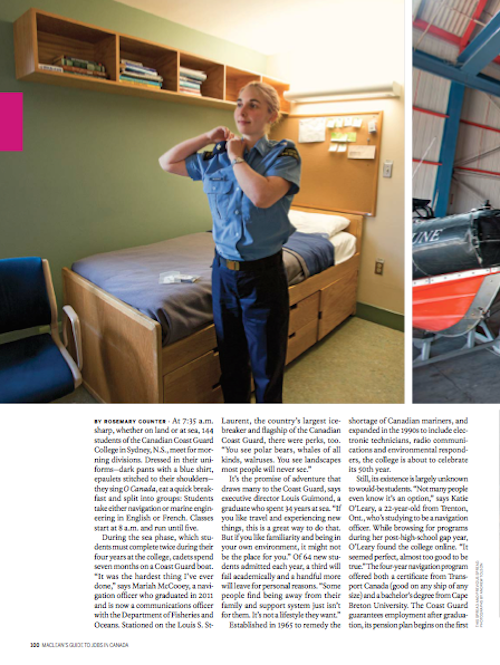 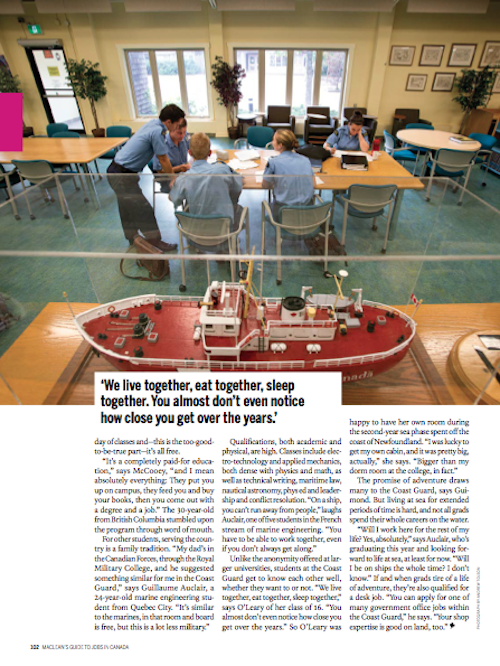