How to choose the best credit card for you

Tapping a little plastic card to buy your groceries or your gas seems like the simplest thing in the world. But if it’s a credit card, you’re actually doing more than just making a purchase, says Barry Choi, personal finance expert and blogger Money We Have. “Really, it’s a loan from the credit provider.” And those little loans add up all month until it’s time to pay your credit card debt.

“If you pay off your full balance, which you always should, it’s usually interest-free for the first 21 days – the grace period following the end of the billing cycle,” Mr. Choi says. Do this, always, and you’re borrowing money for free.

“Free” money and convenience have made credit cards massively popular. In fact, there are more than 76 million Visas and Mastercards circulating in Canada, though the population is less than 40 million. About 90 per cent of Canadian households report having at least one credit card and the average individual has two. And according to the Bank of Canada, most people are pretty responsible with them: It reports that 70 per cent of Canadians pay off their full balance every month.

Don’t get too smug, however. In February, 2022, Statistics Canada reported that Canadian households held about $80-billion in credit card liabilities – up almost 9 per cent from the previous year. It’s these debts where the problem can begin: If and when credit card users don’t pay the full balance and decide instead to let that debt roll over into the next month and beyond.

Granted, if you’re short on cash, it’s very tempting to pay the nicer-sounding “minimum,” sometimes as low as $10. And everything else that remains? “Now you have to pay interest, which is usually 20 to 24 per cent, depending on the card,” Mr. Choi says. The less you pay now, the more you’ll pay later in interest, and all while you keep shopping.

Do you really need a credit card?

There are situations where you absolutely need a credit card, like booking an airline ticket or holding a reservation at a fancy restaurant. But if you don’t shop online and you use a debit card instead, you could probably get along without a credit card. Still, they do make life easier, and nobody wants to pay for big purchases with wads of hundred-dollar bills.

There are other, less obvious benefits to credit cards. If you buy something online that isn’t as described or it breaks or it doesn’t arrive at all, you can call your credit company and they will reverse those funds, says credit expert Mike Gap. Losing your credit card, meanwhile, isn’t such a big deal – as long as you quickly call and cancel it, or put a hold on it until your card is found.

What are credit card protections and what kinds are available?

“Purchase protection,” as described above is just one kind of protection a credit card can offer. There are lots of others, Mr. Gap notes, many of them serving basically as insurance. They include scam and fraud insurance, collision damage insurance on a rental car and, of course, travel insurance, which is broken down further to include (among others) travel medical, flight delay, lost baggage and trip cancellation or interruption insurance. The latter is the reason some would-be travellers got their money refunded easily when their 2020 vacations were cancelled. Those without it, however, were often out of luck.

Depending on your purchasing pattern and needs, other protections are available to save you from the dreaded unforeseen fees (see below). Among them are extended interest-free grace periods and overdraft protection. With some cards you can even get extended manufacturer’s warranties on purchases well beyond the usual time period. Protections vary widely and options are increasing every day. Some lesser-known “random perks,” says Mr. Gap, could be $1,000 mobile phone insurance for a lost or stolen phone, or even roadside assistance. As usual, you get what you pay for, and the swankier your perks, the more the card will cost you in annual fees. Always read the fine print and do your research to see what protections are available – and which you already have.

What fees will you have to pay?

That glorious interest-free loan isn’t entirely free, of course. “You’re borrowing someone else’s money, for free, and why would they do that?” asks Mr. Gap. “They’re going to make money off you somehow.” That’s where the fees come in.

Many credit cards – not all – charge a set annual fee. This is a yearly payment that holds the credit card, Mr. Choi says. Fees tend to hover around $100, but fancier premium cards have fees as high as $600 – although steep, if you’ll reap more than that in rewards, it’s worth it. Remember that most fees are negotiable and watch for deals and sales. “Depending on the offer, you might get the card for free, or free for the year, or be offered a reduced rate on your annual fee.”

Then there are the one-off fees: Cash advance on your credit card from an ATM? That’s a fee. Blow past your credit limit? That’s a fee. Late on a payment? You know what’s coming. There are some sneakier ones too, like foreign-exchange fees. “Any time you make a purchase that’s not in Canadian dollars, your credit card will likely charge you a 2.5 per cent conversion fee,” Mr. Choi says. “It’s baked right in there so you don’t even notice it.”

Visa, Mastercard or American Express: Is there a difference?

“There are probably hundreds of credit cards out there, but I’d argue that they’re all pretty similar these days,” Mr. Choi says. Credit cards are available through credit unions, insurance companies such as Desjardins or big store chains like Canadian Tire or Walmart, but all of them, legally speaking, have to be issued by a Canadian bank, which backs all of those examples, and one of the big three: Visa, Mastercard or American Express.

Visa, Mastercard and American Express (Amex) operate in a similar fashion and offer services and benefits to you, the shopper. One big difference lies in processing fees and transaction percentages that are charged to the merchant. Amex’s higher interchange fee (a.k.a. the “swipe fee”), for example, is the reason many small businesses choose not to accept Amex.

That’s why the biggest difference that you, as a consumer, will experience is that not all stores accept all or the same credit card brands. “Some places don’t accept Mastercard while others only accept Mastercard – all because of issues on the merchant end, Mr. Choi says. Costco, Hudson’s Bay and Canadian Tire have partnered with Mastercard, for example, trading lower merchant fees for access to their shoppers. Store-specific credit cards like these often let you collect rewards twice over: Once with your credit card provider and also by collecting loyalty points.

How many credit cards should you have?

For the reasons above, many people use two of the three big credit cards – which Mr. Choi advises is a good habit to have. “Just in case one card isn’t accepted, you’ll always have a backup.”

This is a reason to have more cards, though. Mr. Gap has – get ready for this – about 50 credit cards. “I open them just for the intro offer, and then I put them away,” he says. Mr. Choi agrees there’s no harm there (he says he has lots of cards and corresponding reward points), but if and only if you can control your urge to shop. If spreading your spending across more cards actually makes you shop more, then take the old-fashioned approach of debt expert and insolvency trustee Melanie Leigh: “Get out your scissors and cut them down the middle,” she says. (Also call and cancel your account, of course, but don’t miss the liberating tactile experience.)

Can you get a credit card even with a low credit score?

This question proved almost laughable to our experts. “I have clients facing bankruptcy that still get pre-approved credit cards that arrive in the mail,” Ms. Leigh says. If you already have a relationship with a financial institution, it’s pretty hard not to qualify for a credit card, Mr. Choi says. And it benefits the credit card companies if you are unable to pay it off each month in full, Mr. Gap points out.

Most people sign up for credit cards the same place they do everything else: the internet. They’ll likely ask for your income, social insurance number, address and contacts, etc. They’ll find your credit score all by themselves. You may be asked to come into a bank to verify information, but this rarely happens, Mr. Choi says. It’s far more likely they’ll happily send you a card and it will arrive to your mailbox in 10 business days.

What kinds of credit card rewards are on offer?

Finally, the fun stuff! There are basically three types of credit card rewards on offer: Travel rewards (or air miles), cash back, and in-store rewards. Let’s look at each.

Travel rewards let you collect points or “miles” that are redeemable on flights and hotels, as well as other perks such as complimentary VIP lounge access at the airport. If you like to travel, definitely go for the miles, Mr. Gap says. The Globe and Mail’s Rob Carrick agrees; he looked at how travel rewards beat cashback and suggested some of the best cards for travelling outside of Canada (spoiler alert: They’re the ones without the usual foreign exchange fee).

Homebodies, meanwhile, can of course enjoy rewards too, in the form of hard cash. Cashback cards will usually offer you somewhere between 1 and 2 per cent back – don’t take anything less than 1 per cent, advises Mr. Gap – plus extra perks on particular shopping categories. The CIBC Dividend Visa Infinite Card, for example, gives 4 per cent back on gas and groceries at eligible retailers.

Last, but not least, is are in-store rewards. As mentioned, many Canadian stores have deals and partnerships with credit card companies. It might seem limiting to get all your rewards at one place, but for a lot of people, it makes perfect sense. “If you do most of your shopping at Walmart, you might as well get a Walmart credit card,” Mr. Choi says.

How do I pick the best credit card?

Despite what the pop-up ads say, there is no “best” credit card, only the one best suited for you. Ms. Leigh suggests you track your spending for a while, preferably with a notebook and a pencil, since most of us shop and pay in myriad ways. “The days when you’d have one account at one bank are over,” she says. So too is cash, mostly, which used to force you to pay attention to your purchases. “If you’re physically handing over a fifty dollar bill for that blouse, you stop and think twice.”

You’ll want a card that caters to your shopping habits – and maybe even fosters some better ones. Consider your shopping strengths and weaknesses. “If you know you’re the kind of person who will carry a balance,” says Mr. Choi, “a low interest rate will be your priority.” And if you’ve got poor credit but plan to do better, there’s something special just for you – the secured credit card. This type of card has you deposit funds first, which acts as collateral for the card issuer in case you can’t make payments. “They’re ideal for people who have made credit mistakes in the past and are looking to raise their credit score,” he says.

If you’ve got good credit and the funds to pay it monthly, then it’s all about the rewards. Decide first whether you’d prefer travel points, cashback or in-store rewards. “That will narrow your choices down a lot,” Mr. Choi says. Next, think about whether you want to avoid an annual fee. You may think nobody wants to pay a fee, but again, if “the benefits are more valuable than the fee, it’s a net gain.” 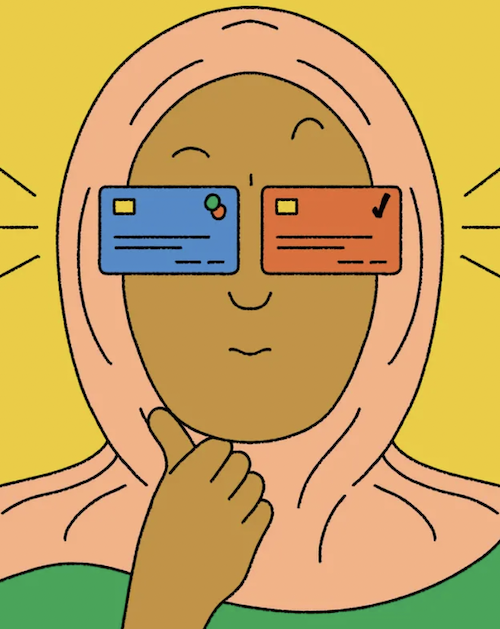