A culinary trail across the Rock

To call chef/outdoorswoman Lori McCarthy’s latest work, “Food, Culture, Place: Stories, Traditions, and Recipes of Newfoundland,” a cookbook would be like calling a clambake a mere soup. It’s equal parts memoir, history, photography, foraging guide and love letter to East Coast chefs — and the winner of the food heritage category at the 2022 Gourmand World Cookbook Awards.

But if you’re more of an armchair hunter-gatherer yourself, you can get the full Newfoundland food experience the easier way: by cruising the island’s distinctive dining destinations. Here, McCarthy shares the stops she’d recommend if she could design her own foodie trail across the island.

In this small town just outside St. John’s, you’ll find a “farm-to-fork café” in an unlikely spot. “A couple of years ago, someone said, ‘What if there were a restaurant inside a garden centre?’” McCarthy explains. The Grounds Cafe is just that, with “super handcrafted food, picnic tables, rotating local art, plants everywhere and vines hanging from the walls.” What’s on the menu? Whatever’s growing, of course, transformed into veggie-packed wraps and heaping salads with carrots, beets, cucumbers, radishes, kale and arugula.

For a trove of delightful finds: The Newfoundland Tea Co. (110 Roe Ave., Gander)

This “little treasure” of a restaurant, as McCarthy calls it, serves a big range of homegrown organic teas alongside an ever-changing lunch menu (soup, salad, handmade pasta), and doubles as an artisan shop selling Newfoundland-made soaps, pottery and apparel. Owner Nicole Keats has something in common with everyone else on McCarthy’s list: “They’re all young, spirited entrepreneurs who embody the idea that if you build it, they will come.”

For the best “picnic” of your life: Experience Twillingate (Twillingate)

“This isn’t a restaurant — it’s a culinary experience,” says McCarthy. She means this literally, as host and guide Crystal Anstey will take you to forage for your feast. Expect an outing that’s as unique as it is personal. “Maybe she’ll walk you through her uncle’s garden, pick up the fish he got, collect berries along the way.” Just when you’re expecting a casual picnic, there comes a five-course seafood feast you won’t believe was made on a beach over an open fire.

For a view like no other: The Black Spruce Restaurant (7 Beach Rd., Norris Point)

Hop in a car and head to the western edge of the island, where you’ll find the award-winning Neddies Harbour Inn, right in Gros Morne National Park. At its equally impressive on-site restaurant, the Black Spruce, specialties include seafood chowder and snow crab and scallop risotto, but chef Jason Lynch isn’t afraid to experiment with other cuisines. McCarthy recalls an especially memorable chicken curry on a recent June visit, when the view was a similar spectacular fusion: “I sat back and stared at the snow-capped mountains while eagles flew overhead and a whale played in the bay!”

Sushi in the middle of rural Newfoundland probably isn’t what you expect. “It’s kinda new for here, but we have a great immigrant population bringing their tastes to our cuisine,” says McCarthy. Young people on the island want sushi and will travel to the aptly named Newfound Sushi, which serves classic Japanese dishes (tempura, miso ramen) as well as signature rolls starring local seafood (like the Loco Lobster or the Blow Me Down). “I just love that,” McCarthy enthuses. “You might think this juxtaposition doesn’t work, but it definitely does.” 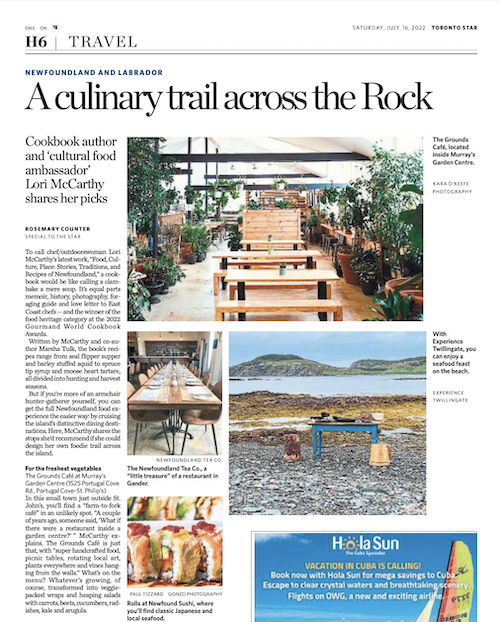