Diane Gabaldon, the mega-bestselling author of the Outlander series, on Go Tell the Bees That I Am Gone

In 1991, Outlander author Diana Gabaldon – a technical writer and professor of scientific computation at Arizona State University – decided to write a novel just to see if she could. Long story short: Gabaldon’s side hobby became the epic series about Claire, a time-travelling Second World War nurse, Jacobite rebels fighting to restore the House of Stuart in 18th century Scotland, and the swelteringly sexy Jamie Fraser, whose kilt inspired the whole series (not to mention a million R-rated fantasies by diehard fans). Just as Go Tell the Bees That I Am Gone, book nine of 10, debuts at No. 1 on the New York Times bestseller list, Zoomer talked to Gabaldon about daydreaming during mass, her unconventional writing process and the unbreakable rules of time travel.

Rosemary Counter: You’ve been doing this series now for 30 years. Happy book birthday! Could you have ever imagined this would become an epic 10-book story?

Diana Gabaldon: Not at all. I intended to write a novel, for practice, just to learn how. I needed to know what it took in terms of mental effort and organization and things like that. The only way to learn was to do it, but I had no plans to even show it to anyone, let alone publish it. I decided that historical fiction would be easiest for me, because I was a research professor and knew my way around a library. If it turned out I had no imagination, I’d have a lot of history to work with.

DG: I wanted a time and place with lots of conflict. I thought about the American Civil War or the Crimean War. Then I happened to see an old Doctor Who rerun where the doctor travels through space, picking up human companions along the way. One of them was a Scotsman, a nice-looking young man in a kilt. I thought, ‘hmm, that’s kind of fetching.’ I was still thinking of him the next day in church.

DG: In church, yes. Right after mass, I grabbed a notebook and started writing. “Man in kilt.” I was pretty stuck on him, so that put me in Scotland. I started researching what the heck was happening there in the 18th century, looking things up at the university library, which luckily had just gone electronic a few months earlier. I learned about history, geography, costume, language. People then were pretty literate, libraries were being established and information was archived, so lots of documentation was available. The high point for conflict, to me, was the Jacobite Rising, where the Scottish were fighting to restore the Stuart monarchy after Queen Anne died without an heir.

RC: Sounds like you already had lots of drama to work with, so how did time travel get added to the mix?

DG: It was a total accident. I thought the story was about the man in the kilt, but of course he needed a love interest – sexual tension is always good. Because he was Scottish, I decided she should be English – more conflict! – and I plopped her into a cottage where a bunch of Scotsman crouched by the hearth. I imagined them turning around, staring at her, asking her who she was and what she was doing there. She answered, “My name’s Claire Elizabeth Beauchamp and who the hell are you?” She was strong and a smart-ass – she didn’t sound at all like an 18th-century woman. But I let her go ahead and be modern, then added the time travel explanation later.

RC: Most novelists plot their novels. You do not. Can you tell me about your writing process?

DG: Every writing class will say you need an idea, an outline, a beginning and conclusion. You do a rough draft, a final, then you must turn it all in. I don’t work that way. Whenever I talk to schools, about halfway through, I ask the teacher to turn around. Then I’ll say, “Okay, the teacher can’t see so you can tell me the truth: Who really writes an outline and a draft and who just writes the dang paper?” Lots of people write the way I do and have no idea what will happen next.

RC: Unlike the others, this book took seven long years to write. Are they getting more difficult or are just taking your time?

DG: The truth is I’m just busier. I’ve written four other books in those last four years, so it’s not like I’m slacking off here! I did have two grandsons born in those years, so I want to spend lots of time with them. I’m also a consultant on the (Starz) TV show, as well as an occasional script writer, so they send me scripts and outlines and daily footage – sometimes 60 or 90 minutes, five days a week. It’s an absolutely fascinating process, but it also takes a lot of time.

DG: I suppose I could, and I definitely comment on things that I think are not in character. Sometimes I have ideas of what might happen in the future, and if a character’s actions now would make a difference somehow, then I say so. If I notice a historical inaccuracy, I would flag that.

RC: Outlander fans are pretty hardcore. As the series comes to a close, are you nervous to satisfy them?

DG: No, I’m not bothered by that. First of all, I have at least two or three years to think about it. I think it will be a happy ending, though I don’t know how other people will feel about it. But really anything can happen!

RC: Are you tempted to just pick everyone up and plop them into a new era altogether? How about Ancient Egypt?

DG: That doesn’t sound appealing to me at all. Jamie can’t time travel, first of all.

RC: But maybe Claire could use her healing powers to teach him.

DG: Time travel isn’t a skill you can learn; it’s genetic. I’ve long decided on my time travel rules and I can’t change them now. That wouldn’t be fair.

RC: You did a pretty fabulous one-eighty from scientist and researcher to fantasy and romance writer —

DG: I really don’t like when my novels are called romance, to be honest. It reminds people of harlequins and bodice rippers, which are fine but not what I write. All good stories are about love, in one way or another, but that doesn’t make them romance. I like to be called historical fiction or historical fantasy, though fantasy conjures up George R.R. Martin, who, except in terms of length, doesn’t write anything like I do. He has dragons. But if you want to add romance at the end there, that would be fine with me.

RC: Okay, good, because like a lot of people, I’m in love with Jamie Fraser. What’s the secret to his widespread allure?

DG: I think it’s his sense of humour.

RC: Yeah, definitely not the kilt.

DG: Hah! I really think it’s because he’s so honest and trustworthy. You can always trust him to tell you the truth. This is the bedrock of all successful long-term relationships and certainly of marriage. The kilt, too, though, you’re right. My husband has three of them in all different styles. 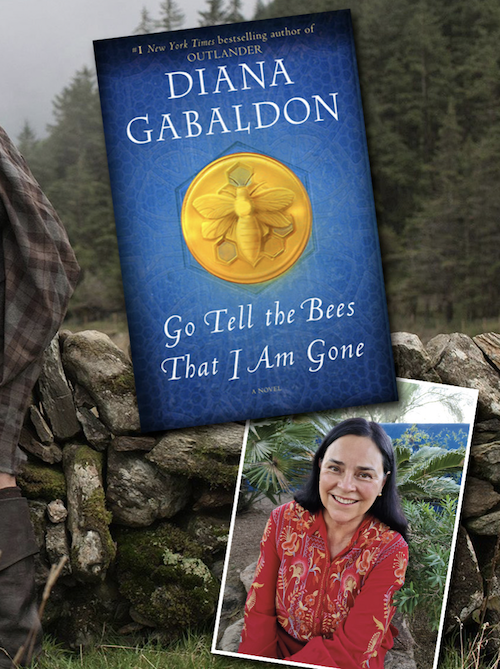