Who is more likely to say ‘I love you’ first?

It’d been nothing but good times with my hunky new boyfriend. There have been nice dates, romantic walks, sweet snuggles–but no L-bombs. Without society to constrain me, I’d probably have blurted out “I love you!” on the third date, but as a seasoned dater and periodic man-terrifier, I knew it was better to bite my lip.

My friend Karen, however, isn’t quite as good at restraint.

“We were lying in bed, post-coital,” she says of her then-man, a work colleague whom she’d been seeing for a whopping three weeks. “I didn’t mean it like, I want to be with you forever; I meant it like you’re wonderful and exciting and I enjoy your company.” Unfortunately, her bedmate’s male brain was incapable of such a distinction. Even worse? Science is on his side.

A new study from the Sloan School of Management at MIT asked some serious questions about love: Who is more likely to say ‘I love you’ first? Does when people say it matter? And how do people respond?

“We took these basic questions and applied an evolutionary perspective,” says Assistant Professor Josh Ackerman. “Saying ‘I love you’ is a negotiation process; essentially you’re making an offer.”

Since women carry and raise children, they’re more selective and invested — so men are anxious to close the gap. “The less choosy sex needs to show they’re committed, and one way to do that is to say ‘I love you’ first and early in a relationship,” says Ackerman.

Whether he’s sincere, however, is a different matter altogether. And here comes the twist: While Ackerman found women respond more positively to ‘I love yous’ after sex, as confirmation they’re not just a booty call, men like to hear the L-word before sex, as confirmation sex is coming. And for these same guys, if commitment isn’t on their agenda, a post-snuggle declaration is the opposite of sexy.

In Karen’s case, he replied with a meek “woah” and they broke up two weeks later.

Karen’s guilty of a common rookie dating error, says Debra Macleod, a relationship expert from Alberta. “Once you say ‘I love you’ to a man, you give him all the control. He isn’t on the chase anymore because he’s already got you.”

Of course, women know this. Unreturned messages and cruel self-help books have them very trained to avoid seeming clingy and desperate at all costs, so they often sit quietly and let him take the lead. “Women have been made so paranoid by pop culture that we’ve swung the other way. It’s a backlash, but a good one,” says Macleod.

“You might assume women feel love more, think about love more, and so they’re probably gonna say it more,” says Ackerman. But you’d be wrong, his study found. When it comes to sincere ‘I love yous’, it’s men who tend to say it first. That’s science too: “If a guy wants to be with you, if he doesn’t want another guy to be with you, he’s gonna say it,” says Macleod.

So just when I least expected it–five months later, but who’s counting?–while meandering home through a park after a sweaty summer baseball game, my boyfriend got that girly sparkle in his eye. I’m not sure if I’d played the dating game expertly well, or if his genes just couldn’t resist mine a moment longer, but maybe it doesn’t really matter. Now that it’s out there, the ‘I love yous’ can flow freely and generously–and hopefully, sincerely. 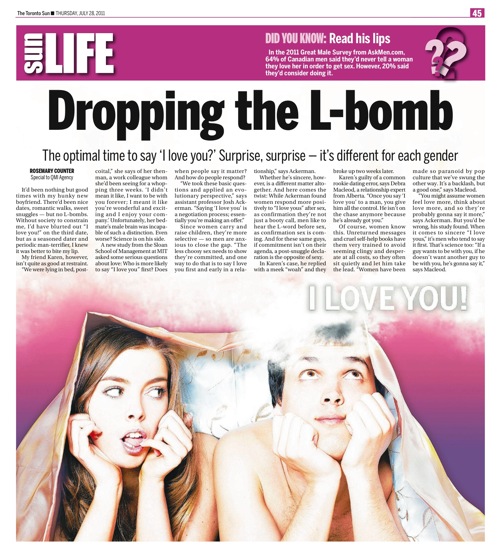