A new breed of self-help is dishing out hard truths. But can we take it?

One winter night, in the middle of a blizzard, five strangers—myself included—meet in the cement basement of a Toronto university. We’re here as part of an anonymous support group for people who have recently broken up, people who break up a lot and, in tonight’s case, a gonzo reporter who has gone undercover to seek tough love in its fullest form.

Tania, a blond hospital clerk who looks at the floor as she speaks, opens the session. “I get dumped a lot,” she says. “Every time, actually.” The 28-year-old is continually drawn to assholes (her word) and then grieves obsessively (my take). Her latest hang-up is Mark. They dated for one week before Tania found pictures of his real girlfriend while stalking him on Facebook. She is midway through a long story of the then-he-said-and-I-was-like variety when I dare to interrupt.

“Well, what do you expect? No man wants a needy, pathetic girlfriend.”

The group stops dead. Tania looks up. It’s clear that I won’t be making any friends at this party.

Harsh, I know, but it’s all in the name of research. Traditional self-help—I’ve read every title on Indigo’s shelves—has always been a cushy safe haven for women who love too much. Like tonight’s moderator, an understanding dumpee herself, self-help validates our problems while offering sympathy and support. But lurking amid the feel-good mantras of You Can Heal Your Life is a new breed of self-help that says just the opposite: Get real, toughen up and get over it already!

Tough love claims to be the hard truth you need to hear—the “real” reason you can’t lose weight, be successful at work or keep a man. Think the blunt wake-up call of Rachel Greenwald’s Why He Didn’t Call You Back or the brutal obviousness of You’re Fat! Now Lose It! If this is all too hard to handle, don’t expect any coddling: If You Have to Cry, Go Outside by The Hills’ Kelly Cutrone was a 2010 New York Times bestseller. And while book sales in general are in a serious slump, self-help revenue has quadrupled. According to experts, the self-help business—books, tapes, DVDs, coaches, seminars, speakers—is worth $10 billion a year.

But how did we go from I’m OK, You’re OK to Skinny Bitch? Bet on the lethal combination of Sex and the City and Oprah. In 2004, author Greg Behrendt, a crude stand-up comedian with no training in self-help, became tough love’s overnight champion with He’s Just Not That Into You. The formula for success was simple. First, one of Carrie’s beaux uttered those infamous words in response to Miranda’s description of a date that ended prematurely because of an alleged early-morning meeting. Then, Oprah gave Behrendt her all-powerful thumbs-up, taking the book’s initial print run of 30,000 to 400,000—and counting.

My own tough love, however, isn’t going so well. Tania looks defeated, and I’m overwhelmed with guilt. The group’s facilitator, a gumchewing Mariah Carey look-alike, glares at me and explains—again—that this is a safe space. She spits her gum into her paper and delivers her own brand of real. “Look, we just want to help people here,” she says, “and help ourselves.”

But in the hope that someone will throw a little tough love back at me, and convinced now that I deserve it, I call Victoria Moran, a life coach, holistic-health counsellor and author of Fat, Broke & Lonely No More! Despite my persistent—and, admittedly, insincere—whines of being too fat, too poor and too single, Moran won’t deliver tough love. “Fat, broke and lonely is an inner voice, and love is the healer of that voice,” she says, reminiscent of self-help years past. On her book’s misleading title, she just sighs. “That’s my editor’s. In-your-face titles are big right now.”

Moran is an unfortunate casualty of the new in-crowd that has hijacked traditional self-help. Besides Behrendt and, of course, Dr. Phil, there’s a whole posse of personalities that dispense marketable nuggets of “real” advice from “real” people without any qualification beyond the platform of their celebrity. Like the reality television that this brand of self-help often emulates, it provides guilty pleasure for idle consumers: It’s entertaining and, perhaps most important, it’s easy. But does it actually work?

For Dr. Sue Johnson, an Ottawa-based professor, clinical psychologist and author of Hold Me Tight, the concept itself is oxymoronic. “Love isn’t tough,” she states bluntly. She has sat through hours of stories like Tania’s, and, while she admits that tough love can be tempting, she says that any reputable therapist wouldn’t dream of offering it: “That stuff is for a few folks who are selling quick fixes to unhappy people.” The moral of her story? Cry as long as you need to. Then, eventually, you’ll stop crying. “The problem with saying ‘Smarten up; get over it’ is that people end up shutting down,” she says. “There aren’t many positive ways to wipe out your feelings.”

For many, dealing with feelings will include self-help books—but also talk or art therapy, spiritual exploration and, yes, support groups. Back in the basement, I’ve listened to sobering sob story after sobering sob story, increasingly becoming convinced that I owe Tania an apology. So, after the session, I follow her to the streetcar and confess my actual motives. She laughs nervously but says she’s happy to help me out.

It turns out that Tania is no newbie to tough love: She has an advice-dispensing roommate who “thinks she’s Oprah.” Just as it’s easy to tell others what to do when you live your life atop the Forbes “Richest” lists, it’s easy for me to suggest that Tania find a nice guy when I’m on my way home to one. (Full disclosure: I’m not fat or broke either.) That said, Mark, Tania’s latest obsession, seems like a dud hardly worth doting on. “Yeah, but if you’re hooked on someone,” she says, “you’re gonna stay hooked on them until you figure out why you shouldn’t be.”

Because the truth is, as a culture we’re hooked on self-help—both the sappy-sweet kind and the borderline self-hate. But there’s good news too: With so many options, smart readers can easily avoid foolish choices. You just buy a different book. If you find yourself lazily reaching for an easy gimmick, ask yourself this: Tough love may feel good because you can get it, but is it really the love you want? 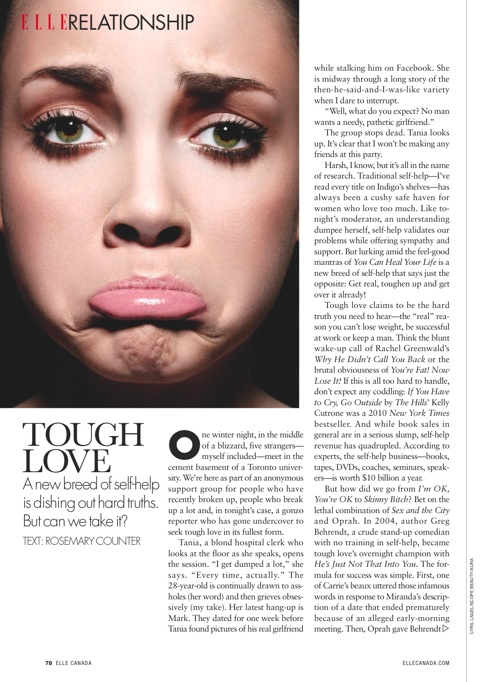 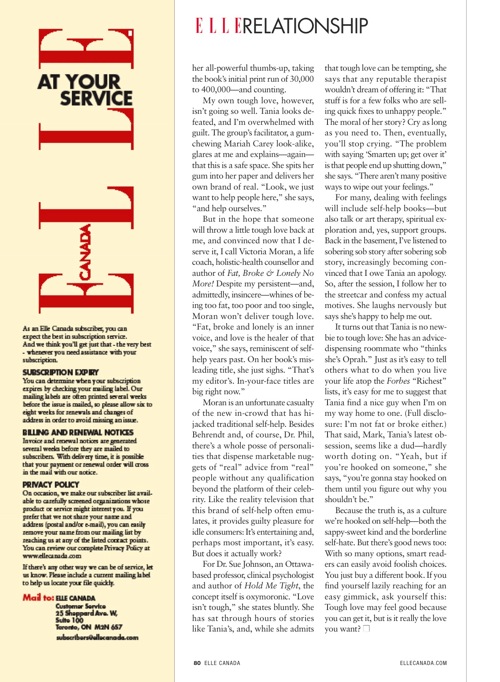