Are women really more clueless than men when it comes to money?

The scene: Katie, gazing at herself in the mirror of one of Toronto’s tony Yorkville boutiques, calls a pal on her smartphone. “It’s $900, but it’s really cute and I have my mom’s credit card,” she justifies. Cut to the cash register dinging and then Katie strutting out, shopping bag in hand. Next she’s off for her beauty appointments: bleaching and highlights ($180), blowout ($35), manicure ($30) and tanning ($10). After a day of indulgences, she finally heads home to her parents’ house, where the 24-year-old nanny lives rent- and worry-free. But debt-free? Not so much. Katie is more than $28,000 in the hole and doesn’t read her statements. “I don’t even know my interest rates,” she giggles. “I don’t look at that.”

Katie is a guest on Princess, the Slice network’s new hit show, but women with princess-like financial leanings are nothing new. In my youth, there was Cher from Clueless—the “ditz with a credit card.” By my teens, she was replaced with spendhappy Carrie Bradshaw, who said, “I will literally be the old woman who lived in her shoes.” These days, Kim Kardashian, after dropping $19,000 in one store on the Keeping Up With the Kardashians episode called “I’d Rather Go Naked…Or Shopping,” required shopping intervention. The message on these shows is clear: Women like shopping, not saving. An RSVP is more important than an RRSP. If a woman blows her rent money on a new dress, not only is it forgivable; it’s also brag-worthy. Being clueless with your money, it seems, is downright adorable!

But are most women really shameless debt deniers? Is our relationship with money, as Suze Orman says in Women & Money: Owning the Power to Control Your Destiny, “totally dysfunctional”? Is there any evidence that women are less capable with money than their male counterparts?

First, the facts. There’s no doubt that most Canadians love to shop. While the country’s debt-to-income ratio is at an all-time high (though still sneaking beneath the American rate), the personal-savings rate has plummeted from 20 percent in 1982 to—prepare yourself—1 percent in 2005. One-third of Canadians under 35 say that their best chance of retiring as a millionaire is to win the lottery. But both sexes are equally guilty, says Gail Vaz-Oxlade, money guru and host of Princess. “Being stupid with your money isn’t a female thing, regardless of what anybody says,” she says. “Women are no more dysfunctional than men. People are dysfunctional—gender has nothing to do with it.” So why are there no princes? “We’re looking for one for next season!” she explains. Men, not surprisingly, aren’t so inclined to brag about their financial weaknesses.

But they do have them: A 2009 TD Canada Trust Bank survey found that 28 percent of Canadian men and just 18 percent of Canadian women cited debt as the reason they can’t save more money. Meanwhile, 43 percent of women say that they stick to a monthly budget—compared to 28 percent of men. In the United States, single men spend, on average, $3,100 more per year overall than single women. Nearly half of women under 40 have increased the amount they have saved or invested since the recession, and a global Reuters Synovate survey found that more than 50 percent of both genders feel that women are more responsible with money than men are. As does Cathy, my Korean eyebrow-waxer, who insists that a good man should hand his paycheque directly to his wife every month.

“There’s an old saying in this business: Men churn and women earn,” explains Vaz-Oxlade. Statistics show that men are more confident and willing to take investment risks, trading a whopping 45 percent more than women, who tend to be more conservative and apprehensive. But don’t assume that that’s a bad thing; according to LouAnn Lofton’s Warren Buffett Invests Like a Girl, certain female characteristics—whether learned or innate—might actually make women better investors than men. We do more research, choose more stable stocks of products we like and use and aren’t susceptible to impulsive moves or hot tips heard on golf courses.

So with all the stats and science behind us, why do so many women giggle and play dumb when it comes to finances? “Whether perpetuated by society—like, don’t worry your pretty little head about it—or internalized because of our upbringing, a lot of women think they just don’t understand money and aren’t capable of analyzing financial situations,” says Laurie Campbell, executive director of Credit Canada. But much like the old math-is-hard logic—officially disproved in 2008, by the way—any capability discrepancy is all hype. “It’s a big myth,” she says. “We are damn capable.”

Even the so-called princesses—whom Campbell does see rarely but maintains that “it’s an insult to think that all women are like that”—are very competent when it comes to digging themselves out of debt. “The first thing you need is a budget,” she says. “It’s not a bad word, but if you don’t like it, call it a cash-flow plan or a spending plan.” Next, use your savings to build your emergency fund—enough to cover you for three to six months lest anything happens and you can’t work. Finally, work on an RSP: “Don’t be foolish to think you can’t save for your retirement, even if it’s just a little each month,” she says. For example, investing $10,000 and receiving a modest 6-percent annual rate of return can result in a total of close to $18,000 after 10 years, $32,000 after 20 years and $57,000 after 30 years.

If saving for retirement seems light years away because of the consumer debt you’re carrying today, you’re not alone. You’re also not off the hook, as getting yourself out of the red is very doable. Five years ago, Angela Self was in a low-paying entry-level job, $8,000 in debt and allowed her Excel-spreadsheet-inclined boyfriend to handle her money. (She just assumed he was better at it.) But one embarrassing declined debit card—in front of a lineup of bakery shoppers, no less—was Self’s wake-up call. “The lady felt sorry for me and let me take the bread and get out of there,” she says. “I remember thinking ‘I don’t even know what’s in my own bank account.’”

And so Self, with four financially challenged friends, started Smart Cookies, a Vancouver-based business that strives to make being money savvy—and talking about it—as cool as Carrie Bradshaw. Together, these friends created budgets and strategies to suit young, urban females—something that, despite searching, the Smart Cookies couldn’t find on bookshelves. “You could still have that dress, or your $200 jeans, you can still go out—it’s just a matter of finding a financial system that works for you,” says Self. The Smart Cookies went so well that they landed on The Oprah Winfrey Show and then scored a book deal followed by a TV show. Self now pens a finance column in the Globe and Mail. (No word on what the ex thinks, but we imagine Self feels pretty satisfied.)

The popularity of money groups is just part of a greater movement. “There’s definitely a shift in terms of being in control,” says Self, referring to the old shopaholic stereotype being done like dinner. (Hear that, Princess Katie?) “Being smart with your money? That’s sexy now.” Vaz-Oxlade agrees: “Money is the last bastion of secrecy. We used to talk with our girlfriends about what sex positions we like but not about money.” All that is changing, she says, and “being money savvy is coming into its own just about now.” So, next time you’re talking reverse cowgirl with your gal pal, dare to interrupt and ask if she’s tried a tax-free savings account. You might discover that she’s far savvier about financial matters than she seems. 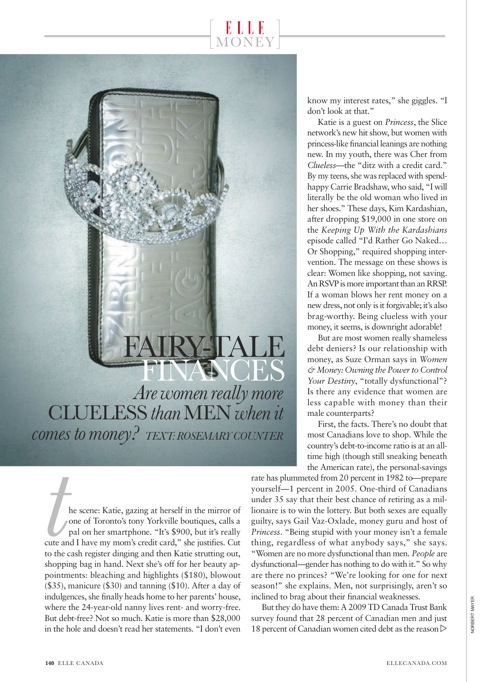 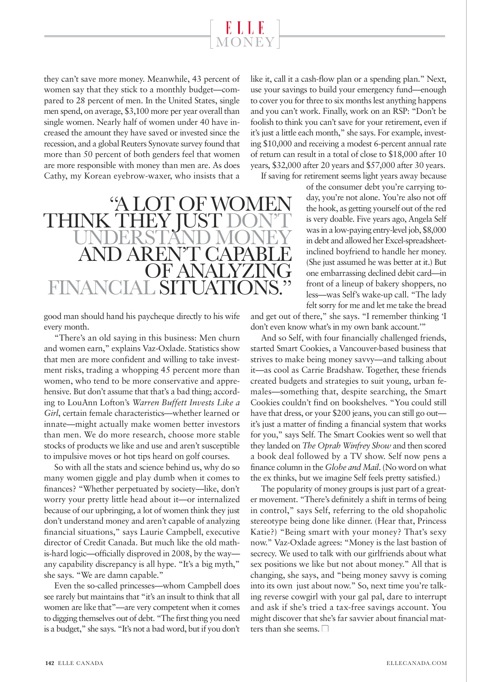