Before I got married, I eagerly said “yes” a lot: to dates, shacking up and wearing a ring. But I said “no”—firmly and flatly—to a joint bank account. (Too intimate.) For five long cohabiting years,
the what’s-mine-is-mine approach to love and money brought familiar comfort. But now that we’re all in, the stakes are up. And I want a new closet. He’d prefer a 4K TV. I suggest we save for a cottage instead. So who wins? And, more importantly, who pays?

Just like that, my new husband and I are right in line with the 41 percent of young Canadian couples who, in 2013, told accounting firm MNP that financial stress affects their relationship. The same year, a BMO survey found that while 98 percent of married couples know it’s important to be on the same financial page, less than half of engaged couples discuss how they plan to handle money once they’re married. (We were in the smarter half, albeit just barely, splitting expenses down the middle with a loose if-it-ain’t-broke strategy for the future. Whether it’s fair, however, has been an ongoing debate.)

Toronto financial planner Shannon Lee Simmons sees young couples like us all the time. But unlike your usual suited planner, the red-haired and potty-mouthed Simmons feels your effing pain. At 31, she’s the same age as the Millennials she caters to; her fee-only firm, the New School of Finance, which launched in 2011, now offers online courses like Track That Shiz and Don’t Get Effed at Tax Time. The newest addition to the course menu, Budget With Your Boo, launched late last year and has already sold hundreds of downloads. For $78, it’s yours to keep on your desktop forever, and it’s her top-selling personal-finances course. She has even known people to give it as a wedding gift to squabbling couples.

“People are getting married later now, so they’ve got a full decade of financial independence with their own set of habits and value judgments,” she says. “You’re combining two people from two financial universes.” Merging your worlds—and doing so fairly, rather than merely equally—is the goal of Budget With Your Boo, a 90-minute online video course designed to be fun. “I had this vision of a couple staying in on a Friday night, opening a bottle of wine and nerding out over their finances,” says Simmons. The fictional (gender-neutral) couple is Jamie and Bailey: One’s a nine-to-fiver, while the other’s freelance; one saves, while the other’s in debt; both want a wedding, but only one wants to buy a house. In short, we are all Jamie and Bailey.

As for my husband and me, we’re drinking coffee instead of wine (it’s morning), but we’re seeking financial equilibrium just the same. Five months post-matrimony, quibbling over minutiae has ballooned into sparring over big purchases. We’re planning for forever now, and it’s neither easy nor cheap. But that’s why we’re here, so we snuggle up in bed and press “play.” First up, the ground rules: “we” language only, no judgments allowed and nobody can say “I told you so.”

“Things might get a little intense,” begins Simmons, the video’s host, in Module 1, I’ll Show You Mine, If You Show Me Yours. It’s not as sexy as it sounds, but it’s certainly revealing. We’re instructed to use a pre-formatted spreadsheet to declare everything: the usual chequing and savings accounts, RRSPs, investments, pensions and anything else (“gold coins, seeds, unicorns,” says our cheeky host).

“Take a deep breath,” she continues, because liabilities are next: mortgages, student loans, commercial debt and money owed to generous parents. Last is income. “Even if you think you know what your partner makes, just hang out with me for a second,” says Simmons, who’s also a certified life coach, as if she’s right here in bed with us. Once you click the tab, the numbers crunch, and there you have good news from Module 1: “We have no more secrets! All your financial shit is out.”

Although I’ve long thought I had this money business figured out, seeing myself in spreadsheet form beside my boo already makes it look different. First, he doesn’t pocket as much as I thought (due to something called taxes). Second, my squirrelling-away-money method adds up fast (making me not nearly as poor as I feel). Our net worths are very close. “I told you so!” he says, breaking the rules. Since I’m feeling good, I let it slide.

Now that we know how much money we’ve got, “how can we do what we wanna do?” asks Simmons in the next module, Pillow-Talk Plans. “The power of sitting down and mapping your expectations is amazing,” she tells me afterwards. “If you’re not aligned, you could blindly walk through life and never notice.” In her in-person financial-advising practice, Simmons has seen many couples learn that one doesn’t want kids; once, someone even revealed a plan to relocate to Costa Rica.

At this point, we pause the video and privately write down any and all goals for the present (one to three years) and the future (three to 10 years). Even with my hubs, with whom I chat about most everything, this is a sweaty and nerve-racking experience. It’s hard enough to be vulnerable and expose your silly dreams—it’s harder still to align on the first try. Somehow, we do! Just kidding. We don’t, of course.

“You want a baby and more vacations?” he says with a laugh. I don’t even align with myself. But there are overlaps: Turns out we both want that closet renovation, the cottage and even the baby (a few years apart, but close enough). For these goals, we set joint long-term savings plans. For everything else, we’ll use personal savings, which we both have. Simmons’ suggested model is a hybrid that pools resources and redistributes expenses proportionately—including personal spending cash. The system is actually fairly intricate—my portion of our mortgage, for example, takes into account things like my savings, not just my income—and tries to fairly deposit cash into four categories: fixed joint expenses, joint spending money and two personal accounts. For us, the biggest change will be growing mutual savings—money that is ours to be spent on us.

All of the above forms the third and final module, The Bicker-Free Budget. Our monthly income is $800 short of our wants, and each thinks it’s the other’s fault for overspending—making our experience not entirely bicker-free. So we pause the course for a football break, during which I fall victim to an online pillow sale.

An hour later, we reconvene to cut costs, bouncing between modules and readjusting. One yearly vacation will have to be enough, and he’ll take homemade lunches from now on. When we finally break even, it all comes together like a very satisfying jigsaw puzzle. Provided we stick to the plan—which we intend to implement at the start of the next month—we’ll know that we’re being fair, nobody’s pinching pennies while the other shops wildly, and we each have a stash to spend however we see fit (video games and spa days, respectively). Stress is down, savings are up and money intimacy feels better than I ever thought it could. Which is a good thing, since splitting up isn’t cheap. “Imagine a course called ‘Divorcing Your Boo’?” jokes Simmons after I’ve graduated. “It’s a decade long and costs $10,000.” 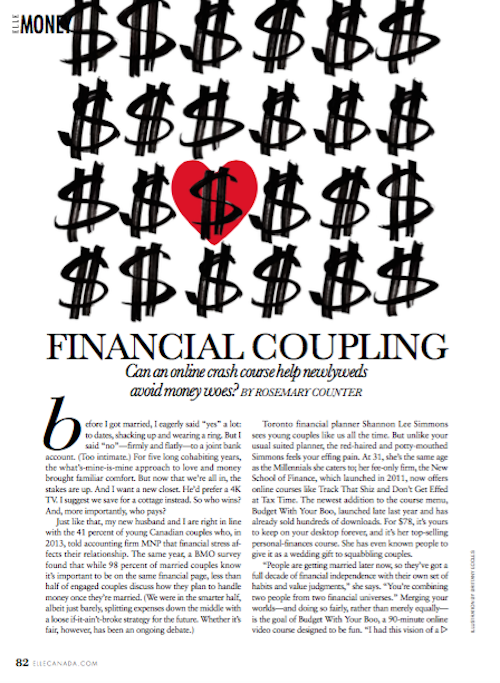 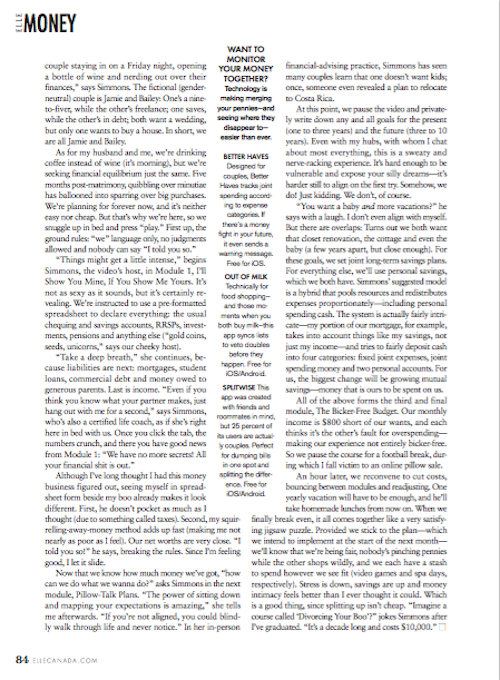