Five stars. Will be back tomorrow.

Healthy, delicious, sustainable and local. The University of Guelph has the best campus food in Canada.

It’s dinnertime on Valentine’s Day at the University of Guelph, but don’t feel bad for anyone eating alone. On the evening’s menu is maple-mustard roasted chicken supreme with asparagus-corn risotto, cider-braised carrots and turnips, duchess potatoes in a red wine jus, roasted vegetable strudel with lemon-thyme crème sauce and homemade chocolate brownies for dessert. Feasts as such are the norm at Guelph.

Nearly 94 per cent of Guelph students are “satisﬁed” or “very satisﬁed” with the taste of the food, according to Maclean’s annual student satisfaction survey. That makes it easily the best university food in the country—Carleton University, which came second, trailed by more than 10 percentage points. And Guelph’s ﬁne food is no small feat. Its ambitious offerings are worthy of a small bistro. Yet the university keeps 4,500 live-in students and 14,000 commuters happily fed with healthy, delicious, interesting meal plans—or as they eloquently call it, “residence dining.”

Recent decades have seen many universities attempt to better their menus to cater to an increasingly sophisticated, health-conscious and multicultural student body. They aren’t satisﬁed with the powdered mashed potatoes and bland frozen veggies of yore. But bad cafeteria food was never a problem at Guelph, which has deep connections with the farming community. “We’re proud that we’ve always been an aggie school,” says Ed Townsley, executive director of hospitality services at Guelph, which evolved in part from the Ontario Agricultural College in 1874 and today ranks as one of the top agriculture schools in the country. Students, their parents and even the visiting public have developed high expectations for Guelph. “You can’t call yourself ‘the food university’ then serve crappy food,” Townsley says. “You just can’t.”

Luckily, and unlike most other universities, Guelph has both history and geography working in its favour. “We’re surrounded by local farms that we’ve known forever and we take advantage of this in ways that most can’t,” says Townsley. “Local” and “sustainable” was just how Guelph always procured their produce—long before those were foodie buzzwords. And that’s when they can’t grow it themselves on the organic farm or in a greenhouse. “We work closely with [the school’s greenhouses] to plan what they should plant for next season,” explains procurement manager Mark Kenny, though university growers couldn’t possibly produce enough for the 20,000 campus meals consumed daily. Additional produce comes direct from farms and farmers—this time of year, that’s largely the Mennonite farming co-op Elmira Produce Auction. For passionate eco-minded students like Katie McCullough of New Brunswick, responsible and sustainable food is non-negotiable: “I’m from a rural community and I know it’s so important to support the local community,” she says.

Supplies then go to executive chef Vijay Nair. After years of cooking for prime ministers and dignitaries in the swankiest hotels in New Delhi, Nair moved to Canada and found himself thoroughly impressed by residence dining. “I was a bit surprised to see food done so right and for all the right reasons,” says Nair, citing flavour, comfort, nutrition and even price. (Guelph’s meal plan costs just $4,100, placing it in the lowest third by price of Ontario university plans.) Nair oversees a staff of more than 1,000 across ﬁve dining units, four smaller cafés and lounges, a pub overlooking the hockey rink, four Tim Hortons, three each of Starbucks and Second Cup, and a full catering company for conferences and black-tie events.

Still, if you can believe it, Nair’s greatest challenge is variety. “We’re always offering a full spectrum from the basic burgers and chicken ﬁngers that people expect all the way up to ﬁne dining—which they also expect,” he says. Besides the Valentine’s dinner, the February food calendar featured Thursday-night steak sandwiches, Grilled Cheese Week, Super Bowl Sunday specials, Pan Asian Week, Chinese New Year and Beach Party Week. Even with all these options, says psychology student Lane Kennedy, “repetitiveness can get to you and you fall into a habit: Chinese food on Tuesday, Italian on Wednesday.”

To combat food ruts, Guelph has appointed ombudsperson Taylor Edwards to bridge the gap between students and hospitality services by spreading the word via social media. (She’s paid in free food and board, naturally.) She runs Twitter, Instagram and Snapchat accounts and will indeed personally respond to every comment or constructive suggestion. Once a year, she surveys 100 people at every dining location and presents her ﬁndings. “Last year, students said they wanted Buddha bowls, and now we have 27 different bowls based on their suggestions,” she says. Chef Nair listens very carefully and adjusts his menu accordingly: “I think what really sets us apart is how we actually listen to the students and the community and act on their suggestions right away,” he says.

Students these days—at Guelph, at least—trend toward healthy, plant-based, vegetarian or vegan, sustainable, local and humane food. Yet the “freshman 15” exists just the same. For this, Guelph also operates the Student Nutrition Awareness Program, or SNAP. Volunteers from the group can be seen postering the dining halls with helpful “snappy tips” (“eat half now and save the rest for later!”). “It’s our job to make sure everyone’s aware of healthy options on campus,” says SNAP’s coordinator Rebecca Delduco, a 21-year-old applied human nutrition student. SNAP hosts monthly events on healthy eating, provides a stamp card that rewards good choices with free fruits and veggies, and works with an on-campus dietician who provides free services to any student struggling with what to eat at school.

Extra food is donated to the Campus Food Bank, and any additional food waste is collected by a local pig farmer. Guelph already composts almost entirely across campus—in fact, student volunteers even collect coffee grinds from shops and deliver them to the organic farm. Since 2011, they’ve replaced disposable dishes by using 40,000 green “ecotainers” instead. But in anticipation of Ontario’s proposed ban on food waste from landﬁlls in 2022, Guelph is attempting to entirely eliminate paper plates and plastic cutlery. “We’re trying to divert as much as we possibly can from landﬁlls,” says Kenny. The changes also mean a far nicer eating experience. “It’s the difference between a nice wine glass or sipping out of plastic by the pool,” says Kenny. That same sentiment applies when comparing Guelph’s “residential dining” to your high school cafeteria: It feels and tastes better, is better for you, and once you’ve got a taste for asparagus risotto, soggy fries just won’t do. 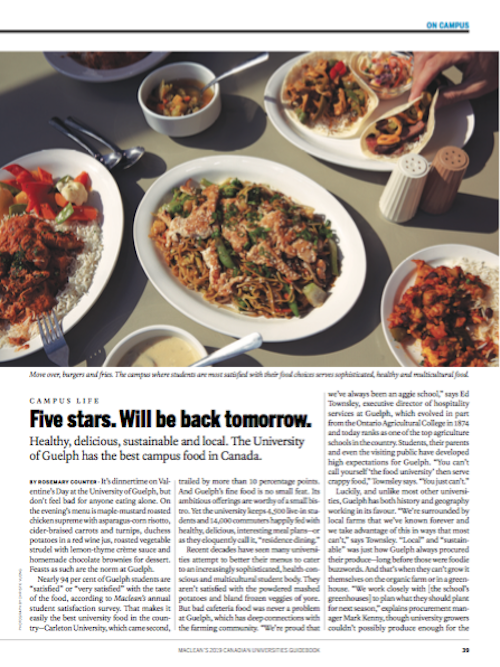 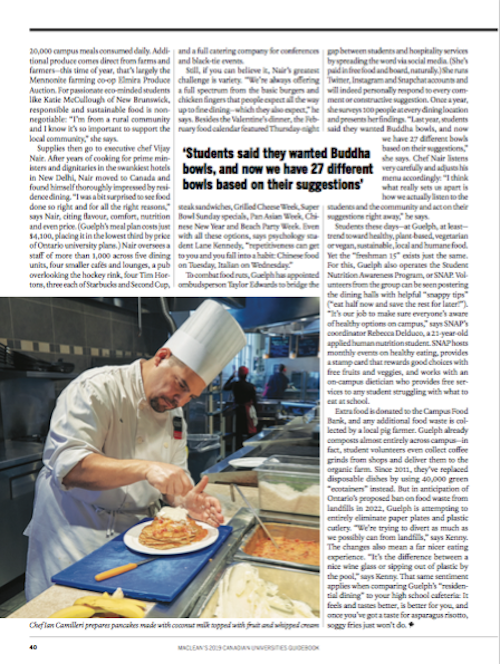 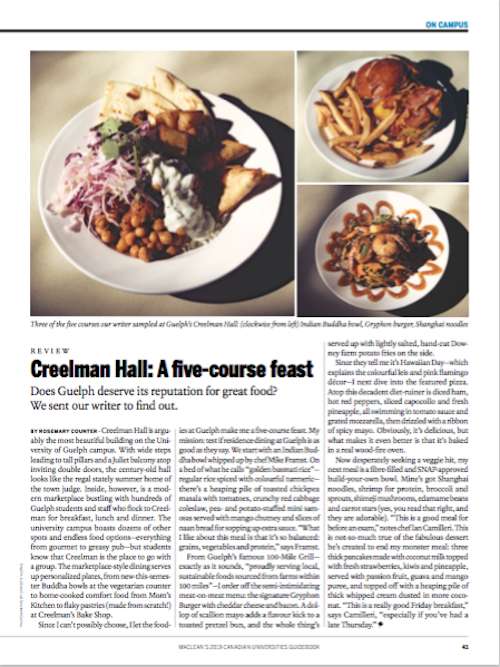