From bothersome to breakup

Can annoying habits be overcome in a relationship?

At Marissa’s house, it’s the receipts.

“My husband likes to keep the receipts for everything, just in case,” she explains. If that doesn’t sound too annoying, wait for it: “The problem is he doesn’t have a filing system. He just leaves them on the table, the breakfast bar, any available surface. In fact, just talking about the receipts is making me feel annoyed.”

It’s a minor little thing, but for anyone who’s ever shacked up with their significant other, you know these things – wet towels on the bed, toilet seat left up, furious flicking of TV channels–add up fast. To 312 fights a year, actually, say UK researchers in a study by betterbathrooms.com. “All couples argue,” said spokesman Nick Elson, “but to see how much time they argue over simple things like household chores was a bit of an eye opener.”

To him, maybe. But just a simple homemade survey of friends confirms what everyone already knows: minor irritations with your partner are everywhere, and just about everyone has them.

Bryer’s ex left dirty plates everywhere around the house. Jessica’s fiancé sticks boogers to the garbage pail for her to scrape off. Emily can’t stand the size of her boyfriend’s big bites, and Margot’s man pops his jaw when he chews. As for me, it’s the open drawers and cupboards.

It’s just so easy to close a drawer, I think, riling myself up as I make another apartment round closing drawers. Why can’t he just do it? Slam! And if it’s so simple, why am I so infuriated? Bang!

“That’s funny on one level,” says Calgary-based marriage therapist Sig Taylor, “but people break up over these things all the time.” A whopping two-thirds of these disagreements – sorry to say it – are unsolvable. “They’re called perpetual problems, and they’re fundamental differences that people have,” he says.

“People are simply wired up differently to manage their emotional stability. So for one person, leaving a toilet seat up is no big deal, while for another person, it can be really upsetting,” he says.

And since there seems to be an implicit gender discrepancy here, I dare ask why our slobbery examples are so male while the nagging is so female. Studies show 80% of issues are raised by women, as are two-thirds of divorces.

“Generally speaking, women have a much more sophisticated relational system that’s focused on connection, whereas men tend to be oblivious,” says Taylor. This means to a man, a cupboard is just a cupboard. “But women attach meaning to it – he doesn’t care, I can’t rely on him – then react to the meaning, not the cupboard.”

But does that mean women should just tone down their sensitivity to symbolism? Not quite, says Taylor. Successful couples know to meet somewhere in the middle – and then let it go.

If you’re the irritator: “You should say, ‘I don’t care about the toilet seat, but you do and I care about you, so I’m going to close the seat.’ Then try. If you just want to do whatever you want, that’s called being single,” says Taylor.

And for the irritated, recognize that your partner is different, but not wrong. “Don’t have a judgmental attitude, don’t blame them and say they’re a bad person. Say, ‘I notice you’re more relaxed than I am about this and that’s ok’.”

Thankfully, this means the old adage is very wrong. People can change, and they should. “You have to – it’s not even optional,” says Taylor. And when one partner is less annoyed and the other’s less annoying, then a measly receipt can have no power over you. 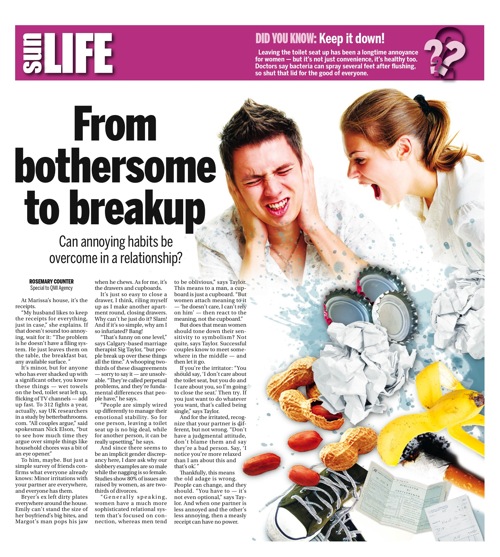