It’s time to admit it: We’re all addicted to Gangnam Style, the music video of South Korean star Psy, described by the Global Post as the “love child of Kim Jong Un and Lady Gaga.”

The video is number one on iTunes, has been viewed over 260 million times and just last week became the most “liked” video in YouTube history. (Take that, Charlie Bit My Finger!)

What’s better than a stout Korean pop star riding an invisible horse in a tuxedo? The dance classes that follow, of course.

For those of us desperately looking to escape aerobic boredom and Rihanna, there are now Gangnam Style workouts.

Last week, Sunberry Fitness in Richmond, B.C., added a Gangnam Style Cardio Dance Fitness Class to their schedule. When it promptly filled up, they added another.

“The instructor’s probably heard it 10,000 times,” laughs Nancy Lin, Sunberry’s manager. “She watched the video and modified the choreography. It’s not as easy as it appears.”

Not unlike Monty Python — though with slightly more rhythm — PSY in his video gallops through a (real) horse-filled stable and around a (plastic) horse carousel.

PSY taught Britney Spears his signature move on the Ellen DeGeneres Show. “Bounce like you’re riding an invisible horse,” he explained. (Britney, for the record, was a natural in four-inch pumps.)

You’ll probably be more comfy in sneakers though, as the Gangnam Style routine is surprisingly hard — or at least Sunberry’s version of it is. Beginning with deep jumping lunges, instructor Lisa Kirby has transformed the PSY’s signature into a fast series of alternating wide and sitting squats.

Since classes haven’t yet hit the GTA, I took to the internet for an at-home lesson.

I find what I’m looking for on blogilates.com, a San Francisco-based site created by Cassey Ho. She choreographed and posted a Gangnam workout in early September. “It had such a great beat that I had to make a dance workout to it,” she says.

I acquired an empty house, locate my most fluorescent of sports bras and sheepishly close my blinds before hitting play. With the highest of energy and shortest of shorts, Ho shouts: “Give me some hip here! There’s gonna be a lot of pelvic thrusting!”

Together — although it’s mostly Ho — we run through the five-minute routine, doing the Egyptian, cheerleader-esque sidekicks, bouncy grapevines and, of course, we ride the imaginary horse.

At the end of the video, I’m so embarrassed I miss the Macarena. To be honest, I’m thrilled it’s over. But I’ve definitely worked up a sweat. Maybe this could replace the gym: After all, it’s anything but boring. 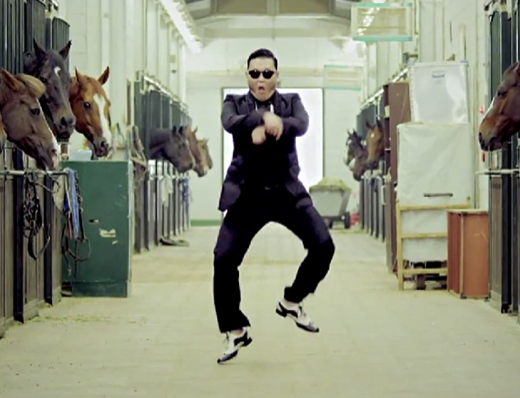