Pre-Christmas shopping with my boyfriend is always a bit of challenge.

“Do you like the beige one—or the other beige one?”

“This one’s on sale, but this one’s cheaper.”

Before this story continues, here’s some clarification: Whatever you’re thinking, he’s the one agonizing over which beige jacket to buy as a gift; I’m the whiner with sore feet. He suggests we grab a $7 mocha-frappa something before we head out into the cold; I think we should hold out for bulk chai tea bags at home. He’s good to grab a cab, but I’d rather walk—through a blizzard if it comes to that—and keep my tenner. In other words, we’re shopping opposites on all fronts, especially during the holiday shopping frenzy—my most hated buying season—where he’s clearly the Jacob Marley to my Scrooge.

We’re also living proof that, unlike Marley and his misunderstood boss, shopping stereotypes are just that: stereotypes. That said, there’s lots of “proof” that we may be the exception: Researchers at Iowa State University found that women are twice as likely to shop impulsively as men. A study presented at the British Psychological Society linked spending sprees to hormonal changes during the menstrual cycle’s luteal phase—the 10 days preperiod (a.k.a. PMS city). Meanwhile, a 2007 study by the Toronto consulting firm Verde Group found that women prioritize the experience of shopping (friendships with salesgirls, store atmosphere), while men care more about practical issues like lineups and parking. As usual, even when it comes to shopping, they say that women are emotional and men are rational.

“We have lots of stereotypes for shopaholic women spenders. It’s ultra-cool to brag about buying a pair of Pradas you can’t afford—it’s funny and cute,” says Lesley Scorgie, a Calgary-based money expert and author of Rich by Forty: A Young Couple’s Guide to Building Net Worth. “We don’t have the same stereotypes for men who shop, but they’re spending too. In fact, men are way more comfortable with big-ticket items—electronics, cars, sports tickets—and spending a lot of money all at once.”

That might explain why, after all that endless sale-speak, my fella whipped out his VISA and bought both. His defence: “My money habits aren’t as bad as they used to be, but I still like to spend it when I have it to spare,” he says. “It’s not the process of shopping I like; it’s the acquisition of things—even acquisitions for you. I want to buy you all the best Christmas presents.”

Sweet, yes, but you guessed it: I disagree. (Bah, humbug!) Stuff, to me, is just more stuff. It’s crowding my closets, clogging every drawer, cluttering my flat surfaces. How much more stuff can two people with too much stuff already possibly squeeze into 800 square feet?

“Are you interviewing me or arguing with me?” he asks as we crawl into bed later that night.

A little bit of both, it seems, despite his insistence that it’s my job at this moment to listen without interrupting.

But arguing—or, as I call it, “constructive conversation”—is very healthy, says Scorgie. “Couples get into trouble when they don’t talk,” she says, citing one twosome she knows in which the husband surprised his pregnant wife with a $60,000 new truck. (Not long afterwards, she surprised him with divorce papers.) Despite fuzzy childhood memories of Christmas-morning surprises, the holidays are no time for financial shocks, she says. “Avoid conflict and disappointment by an agreed-upon budget beforehand—even if one person spends $500 and the other spends only $50.”

If that already feels awkward, don’t let it kill your eggnog buzz. Financial incompatibility is the norm rather than the exception: “Most people aren’t overly financially compatible on the spending front,” says Scorgie. It’s only the number one reason that couples split and harder to talk about than sex or your flirty ex, and the obvious answer—separate bank accounts—doesn’t have the best track record. A recent study from Cornell University found that, besides the obvious stigma that you don’t trust each other, joint bank accounts—held by most couples, though one quarter also keep separate accounts—were associated with higher levels of relationship quality on all fronts. Individualist arrangements, they found, reduced feelings of intimacy, sexual compatibility and conflict resolution.

Jargon translation to real life? Cut to an unfortunate scene in a busy aisle of Canadian Tire. He sees a shiny pot and wants it; I say we already have a perfectly sufficient pot. He says it’s not quite big enough for corn come Christmas dinner; I say we also have an equally useful knife to cut cobs—and corn is for Thanksgiving anyhow. He sees that the pot is on sale and becomes convinced that we’re fools to leave it; I offer an insincere promise to “think about it.” Victory is mine.

“The bottom line is,” he tells me later, “I just didn’t want to face your scorn and wrath.” Not exactly what a girl wants to hear during the season of giving.

I want good pots, I explain, but I’d rather save my dollars and invest in a quality set sometime in the unforeseen future. This is my own bad money habit and the flip side of this financial he said/she said: Just as his shopping habits are backwards to me, mine are the same to him. “You dwell over your wants but never buy anything. Then, when you finally break, you spend a hundred bucks on face cream—that’s ridiculous.”

No, that’s NARS hydrating moisture, buddy, and it makes me feel like a hundred bucks every time I slather up. And I won’t feel a dab guilty about it either, nor will I ask for permission to splurge. (Why he doesn’t call me on blatant hypocrisy, though, is a Christmas miracle.) So, with all this stacked against us, I meekly ask “Scorgie, are we doomed?”

“Absolutely not,” she says. “In fact, a little bit of mismatch is healthy.” We all know that opposites attract, but it’s especially ironic that spenders (those who see their bling as a fast track to immediate pleasure) and savers (who obsessively squirrel money away for a better tomorrow) can’t keep their hands off each other—provided that they manage to meet halfway.

“It doesn’t always seem like it, but it makes total sense,” explains Scorgie. “In your case, having a partner who is better able to enjoy money can be a very good thing.” And get this: He agrees. “It works when you talk me out of random frivolous stuff that I really don’t need. And it also works when I’m there to convince you to enjoy a nice coffee because it tastes good and you can afford it.”

Since it’s all about compromise and it’s only five bucks, I guess I’ll try the Skinny Caramel Macchiato after all. And he’s right: It’s delicious. 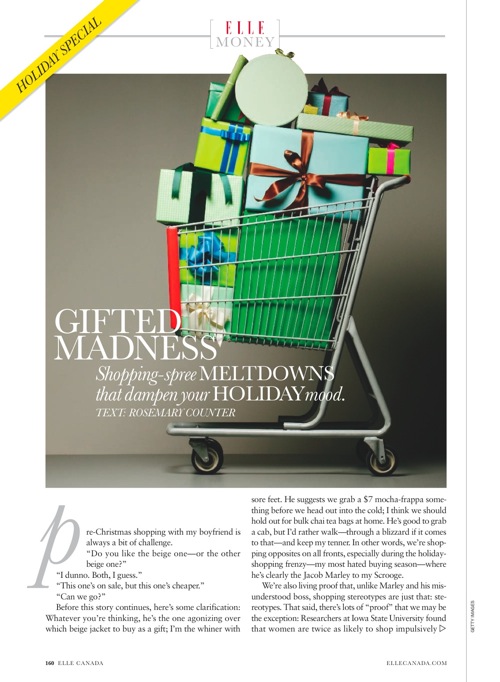 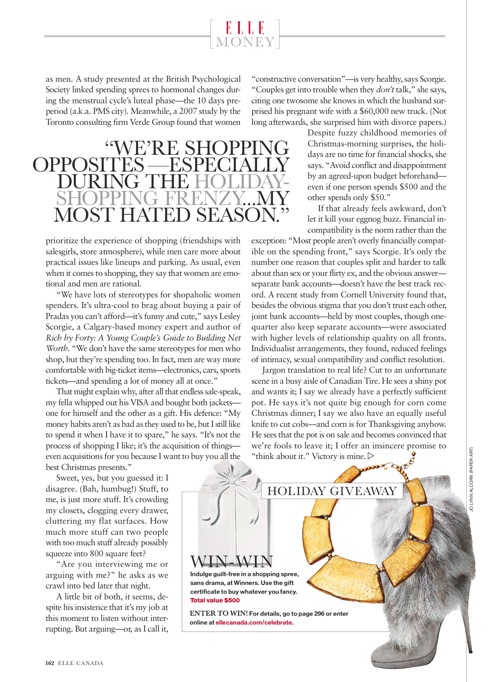