When “70-going-on-35” retiree Sandra Cuthbertson needs a break from her home in Ontario’s Horse- shoe Valley, she doesn’t pack a suitcase or hop a plane; her preferred getaway is just 30 metres from her door. Two years ago, she invested many hours and $3,500—on clearance from the local Simcoe Sheds—in an 8 x 12-foot shed, complete with a veranda and hardwood floors and an electric fireplace, which she parked beside a pond with a waterfall. Cuthbertson loves her space so much that she no longer uses the s-word to describe it. “I much prefer cabin retreat.”

Still, trending hard this summer is the “she shed.” Dubbed women’s answer to the man cave, she sheds are just as they sound: Regular backyard sheds, often right off the lot, transformed internally into women-only spots with rocking chairs, wine fridges and chandeliers. Some have specific purposes, like gardening or arts and crafts, but work-free zones are popular, too. “I have tea, I read, I meditate, I play my ukulele,” says Cuthbertson. “My husband’s retired now, hence I need my space.”

“Women are finally saying, ‘Move over, it’s my turn,’” says Cindy Jardim, director of style and trends at Lowe’s, which has been quick to hop aboard the she-shed trend. On display this summer is the La Remise shed, a $4,500 kit that produces a five-sided, 10 x 10-foot shed which Lowe’s stylized for would-be she-shed shoppers with floral wallpaper, pastel throw pillows and a 23-bottle wine fridge. Unlike the man cave, often found in dark basements or dingy garages, the she shed is defined instead by its comfort and immaculate decor.

For Jacqueline Becker, an Arizona-based attorney turned designer at SheShedDecor.com, the she shed is a byproduct of another of-the-moment trend: tiny houses. “This all stemmed from the tiny-home movement, which itself stemmed from the real estate market,” says Becker. Tiny homes have proven particularly popular in the U.K. as well as Australia, where a tiny home on undeveloped land can make for an affordable getaway. And since she sheds can be delivered and decorated in a weekend, they make for good TV: He Shed She Shed premiered on FYI Network in April.

Though usually marketed as a respite from work and responsibility, Vancouver’s Patti Poskitt uses her she shed as a workspace. “I work from home, at all hours, and was toying with the idea of renting office space when the idea just came to me,” says the 59-year-old television executive. She bought a 144-sq.-foot prefab for $15,000, added desks, vintage art and sliding doors, and moved her whole team in. “I have two assistants, sometimes three, filtering in and out of my shed. Everyone who walks through the door tells me how cool it is.”

Poskitt was equally inspired by her neighbours. “Everyone’s transforming their shed into secondary suites or yoga rooms,” she says. But not everyone is embracing the term. “I would never call my studio anything but a studio,” says Poskitt’s friend and mosaic artist Linda Del Rosario. “I don’t understand why it has to be classified as feminine.”

For others, a room of one’s own is the whole point of the she shed. “Lots of men joke the entire house is hers anyway, but really the kitchen and bathroom and kids’ bedrooms aren’t her own space,” says Edmonton carpenter Steve Zaleschuk from Finished Right Contracting, who has had 15 requests for she sheds this season, ranging from $8,000-$30,000. Like the tiny homes he usually specializes in, size doesn’t matter as much as function. “I’d ask if you want a desk or an easel or a potting bench. Then we’d incorporate as much as we possibly can into the smallest space that works.” Zaleschuk’s sheds use solar energy, mounted fireplaces and skylights, plus he’ll finish with paint in this season’s popular dusty rose.

“Be brave with colour and bold with your choices,” says Jardim, as she sheds are perfect for all the smaller-scale design risks you might not take in your house. Keep clutter out—lest your she shed become regular storage—and invite your girlfriends over. Whether you let your husband visit, how- ever, is every lady’s call. 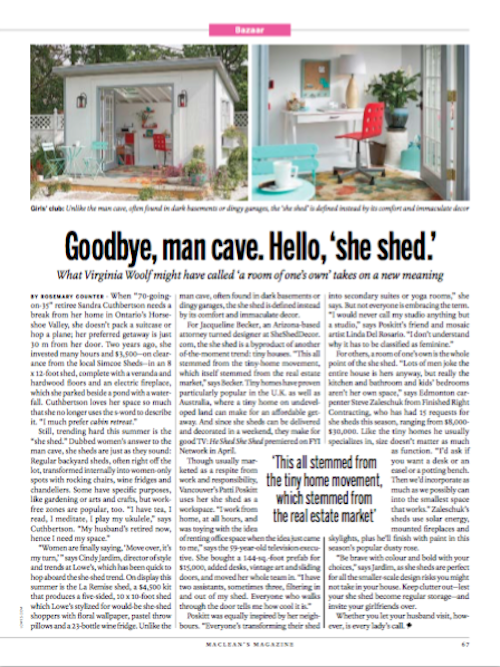