Plagued by a pesky cough? Here’s what may be causing it, and how to get relief

Whether it’s thanks to seasonal allergies or a common cold, coughs can plague your family any time of year. “A cough is a reflex to try and get rid of whatever’s irritating us,” explains Dr. James Dickinson, professor of family medicine at the University of Calgary. Often accompanied by other symptoms and sometimes lingering for weeks, coughs can be tough on your body. Get relief with these over-the-counter helpers sure to have you feeling better – stat!

DRY COUGH
“A dry cough [makes] an almost clearing-your- throat kind of sound,” says Dr. Dickinson. It is literally dry, meaning no mucus or fluid is being expelled from the body. Though a dry cough can be caused by irritants like smoke or pollen, or more serious conditions like asthma, “if there are no other symptoms, it’s commonly an infection of the upper respiratory tract that lingers following a cold,” says Brantford, Ont.-based pharmacist Nadia Gabet. A chronic cough that persists for more than a month is “most likely to be allergies,” says Dr. Dickinson.

TREATMENT
For an otherwise symptomless cough, Gabet recommends a basic cough suppressant, often dextromethorphan – the active ingredient in most over-the-counter cough syrups – in either liquid or tablet form for adults. “It will help you manage, whether that [means] sleeping better or going to work,” she says. When it comes to kids, Health Canada advises against cough medicines for those under the age of six years. (See “Kids and Coughs,” page 86, for more information.) An allergy-related cough, meanwhile, can be helped by over-the-counter antihistamines (which themselves contain a mild cough-suppressing property). If you’re looking for a natural cure, try a spoonful of honey: many studies have shown that it can be as effective as over-the-counter cough remedies. To help fight the germs faster, opt for a cup of tea with lemon, which “is thought to have antiviral properties,” says Gabet. And the old advice is still best: drink plenty of fluids.

WET COUGH
Also called a “productive cough,” a wet cough actively expels mucus (or sputum) from the body. It typically originates in either the nose or the lungs, advises Dr. Dickinson, and the source of the mucus should guide the remedy you choose. A runny nose and tender sinuses indicate your nose is the culprit, while a sore and stuffy chest likely mean your lungs are the mucus makers. Severe soreness in the chest, however, can indicate a more serious ailment, including inflammation of the lungs, bronchitis or pneumonia. See your doctor immediately if you’re showing signs of a bacterial infection (such as coloured phlegm); you’ll likely need antibiotics.

TREATMENT
If your nose and sinuses are the source of your discomfort, a sinus-formula decongestant reduces swelling in the nasal passages to relieve a stuffy nose. If mucus is from the lungs, opt for an expectorant, which “loosens and breaks up mucus and phlegm so it’s easier to cough up,” explains Gabet.

REFLUX COUGH
 A nagging, dry cough that comes particularly at night or during your
sleep but can continue throughout the day could be a symptom of gastroesophageal reflux disease, commonly called acid reflux. “A reflux cough is caused by acid coming back up the esophagus and irritating the throat,” says Dr. Dickinson.

TREATMENT
It’s not the most obvious of cough remedies, explains Gabet, “but for people with acid reflux, over-the-counter antacids act as a barrier from the stomach to prevent indigestion, which could indirectly reduce your cough.” Natural remedies, like licorice root or baking soda (mix a half teaspoon of baking soda into a big glass of water), can also calm the stomach – and help curb the nighttime cough.

COUGH AND COLD
Battling a cold? Chances are your cough (whether wet or dry) is only one of a slew of other unpleasant symptoms ruining your day. A cough accompanied by a runny nose, headache, soreness and fatigue is likely a common cold, while “a cough with a fever or chills is probably the flu,” says Gabet.

TREATMENT
A variety of blended cough and cold (or cold and flu) options are available, in capsule and drinkable form, but Dr. Dickinson suggests opting for single-purpose medications (acetaminophen for pain, nasal decongestant for runny nose, etc.) to help target specific symptoms. “Then you can customize your dose and adjust it [as needed],” he says.

KIDS AND COUGHS
When it comes to children under six years, Health Canada does not recommend using cough medicines. “Dextromethorphan [the active ingredient in most cough syrups] is a narcotic and can be dangerous to children,” says Dr. Dickinson. Moreover, explains Gabet, they’re simply not as effective: “They don’t work as well in children, and the side effects can be greater.”

TREATMENT
Some homeopathic remedies offer a safe alternative to help little coughers feel better soon. Many are made with honey, because of its natural cough- suppressing power, and are therefore not recommended for children under one year (there’s a small risk of infant botulism). Sick babies will sadly have to wait it out: give them lots of fluids and consider investing in a cool-air humidifier to help loosen mucus. If you’re concerned your baby’s cough is more serious, or if it’s accompanied by a fever, see your doctor. 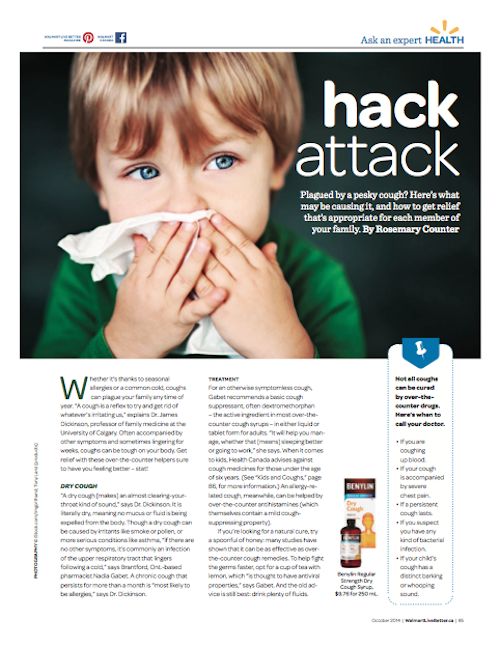