A brief history of beer week

A decade ago, Troy Burtch, now of Great Lakes Brewery, and two friends were on a flight back to Toronto after visiting Chicago’s Craft Brewers Conference. While tossing back a few pilsners, the craft beer enthusiasts got talking about their own city. By the time they landed, the group was firmly committed to giving Toronto a week-long beer festival of its own.

But this was 2009, and the Canadian craft beer industry wasn’t like it is today. “There were big established breweries but they were mostly doing safe beers,” says Burtch. Consumers tended to always buy the same six-pack. Toronto Beer Week sought to show these brand loyalists that they had options. “Our thought process was to educate consumers about what was already happening in their own backyard.”

Alongside Great Lakes Brewery’s John Bowden, Cass Enright was also on that fateful flight. An advertising guy by day, Enright ran the Bar Towel, an online beer community, on the side. He had expanded the operation to a dream team of 10. “We recruited all the people we needed—brewers, bar owners, marketers, a lawyer and a graphic designer—and we all took roles,” says enright. The plan was to connect breweries with bars and restaurants to showcase interesting beers in all corners of the city. It would be like a whisky tasting but less pretentious. “We wanted to make an event we’d want to attend,” says Enright. “Bar-friendly, brewery-friendly, people-friendly.”

The planners met monthly at C’est What (owner George Milbrandt was on the team, naturally) to discuss possibilities. They decided to piggyback on the Toronto International Film Festival, choosing the week immediately afterwards to serve as a sort of comedown after-party. The team proposed a win-win situation, says Burtch: “The restaurants and bars throw an event, we put bums in chairs, and while the customers were there, they’d try a different beer.”

The inaugural Toronto Beer Week in 2010 featured 35 breweries showcasing their offerings in 75 restaurants. More impressive was the turnout: thousands of people showed up, a mix of beer aficionados, industry professionals, home brewers and regular diners who just happened to walk through the door. By all accounts, the week was a massive success.

Which of course presented the planners with a new problem: how can next year, and every year after, be even better? The founders responded by creating a “passport” guidebook; they added the Golden Taps Awards; and they brewed an official beer, partnering with the LCBO to sell it in stores.

Honoured at the prospect of creating the official brew, indie Alehouse’s Fisher signed on before he’d even thought about pesky logistics. To make enough beer, they’d need to make a batch four times larger than anything they’d produced before.

Yet somehow it all came together—a common theme in Toronto Beer Week’s never-boring history. Enright’s best memories include looking up from behind the bar and realizing he’d just poured a pint for John Tory, then in his first mayoral candidacy. “One year, a Scottish brewery did a 10-course dinner at Beer Bistro,” says Symes of his favourite memory. “They served up a beer that was 55 per cent alcohol. You won’t find that in the liquor store.”

Those memories and countless more made Beer Week bigger than they’d ever imagined. This year is the 10th anniversary of Toronto Beer Week, and the event features hundreds of beers at dozens of venues, so you probably can’t try them all. “Pace yourself,” Burtch advises. “Find some places in your neighbourhood, but also some not in your neighbourhood that you’ve always wanted to try.” drink lots of water as you go. “And try to pair your beers with a food that you might not think of and let the avours blow your mind,” Burtch adds. Most important, he says, is the social aspect. “Try to meet a new person everywhere you go. You like beer, they like beer, so you already have something in common.” 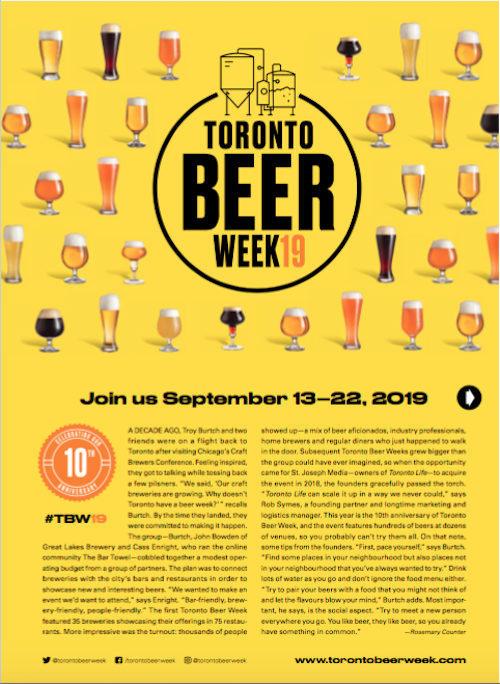