How much money should be in my emergency fund?

You’ve probably heard that setting up an emergency fund – or “rainy day fund” is a crucial part of ensuring your financial health. But how much do you need? Where should you keep it? Here are answers to some of the most common questions on creating your own financial life jacket.

What is an emergency fund and do you need one?

An emergency fund is exactly what it sounds like: money saved and put aside specifically for unforeseen expenses. Although this sounds a lot like a savings account, it distinctly is not. “An emergency fund is not actual savings, because you’re not saving for anything in particular, you’re stashing it away to be deployed later when something unexpected happens,” says Shannon Lee Simmons, a financial planner and founder of The New School of Finance.

And yes, you and everyone else definitely need an emergency fund. Here’s why: It’s the cushion you need to keep an unexpected expense from wreaking havoc on the rest of your financial plan, so you don’t need to cash in an RRSP or sell stock you’d rather keep or, worst of all, plunge deep into debt. “An emergency fund is your best line of defence between you and credit card debt in an emergency.” A better question, therefore, becomes …

Ms. Simmons differentiates between two kinds of emergencies. “The first is income disruption, which we all felt during the pandemic, which basically asks what you’ll do if you lose your job or can’t work,” she says. In this case, your living expenses (including rent and food) can indeed be considered “emergencies.”

But when we talk about emergency funds, we are typically talking about Ms. Simmons’ second kind of emergencies: situational. “This is something like your laptop breaks or your car breaks down or the roof starts leaking.” A few more examples are unforeseen medical expenses, a new furnace, unplanned travel, etc.

And what are not emergencies? Impromptu travel for pleasure, furniture or new clothing (such as your favourite jeans on super sale), your rent or Netflix subscription or phone upgrade or car payment (those are monthly expenses you’ve prepared for, right?).

For anyone who has trouble differentiating what’s an emergency and what’s not, try Ms. Simmons’ handy rule: “Any situation where you’re taking out credit card debt because you have to pay for something and you have to pay it now is an emergency. Anything that can wait, can wait.”

What are the different kinds of emergency funds?

The term “emergency fund” is sometimes used interchangeably with the nicer-sounding “rainy-day fund” or “sinking fund.” But neither is quite the same.

“A rainy-day fund is a savings account that you use for fun stuff – shopping or travel or entertainment – that you’ve saved up to enjoy,” Ms. Simmons says.

A “sinking fund,” meanwhile, is money put aside in advance for an irregular, but predetermined expense such as a wedding, or home renovation, or maybe a new fridge because yours is on its last legs. The difference? You guessed it: An emergency is, by definition, unforeseen. You’re planning for the stuff you can’t plan for.

How much money should be in my emergency fund?

“That’s the million-dollar question,” says money coach Judith Cane. And just like a million dollars, the answer alludes most of us. The truth is countless factors determine what kind of emergency you might face and – crucially – how much it could cost. Just a few variables include your usual income, whether you’re self-employed or not, where you live, your lifestyle, whether you have kids or elderly parents to consider, and your own health, of course.

Ms. Simmons agrees that while there’s no perfect figure, each individual’s perfect amount has something in common: “It’s whatever amount feels to you like a cushion,” she says. “It’s the amount that when you log into your online banking and you see that money sitting there, just in case, it feels like a warm blanket of calm, and its existence reduces money stress in a way that no other account can.”

Interestingly, for many of Ms. Simmons’ clients, the happy place is $5,000. “This is a very popular nugget,” she explains. “Five-thousand dollars is a great number for a lot of people because it tends to be a first and last month’s rent; it tends to cover a car repair; and it’s often the first part of a home emergency like a roof or a leaking basement.”

But it’s also the case, Ms. Simmons says, that “anything is better than nothing.” The crucial thing is to get started, even with a small amount, topping up as you can: “More important than any amount is the habit of putting money aside for expenses outside your regular budget.”

What is the three-to-six-months rule – and is it enough?

Ms. Cane prefers her clients have three months’ worth of living expenses set aside, minimum, but she cites that mainly because people ask her the what-is-enough question so often and they always seem to want a hard number.

Many financial advisers subscribe to some variety of the three-to-six-months rule (which is actually a pretty wide window). Some, like U.S. personal finance guru Suze Orman, believe even six months’ worth of living expenses set aside is not enough; Ms. Orman recommends eight months to a year.

Ms. Simmons believes that’s impossible for most. “Who can have a year’s worth of money in an emergency fund? To that, I’d say, sure, shoot for the moon, but it’s just not realistic for most people,” she says. No amount should feel so unreachable that it discourages you – even her ever-popular $5,000. “Start with $500 then,” she says, as it’s “still better than nothing at all.”

What do personal finance experts say about emergency funds?

Last year, and for this reason exactly, The Globe and Mail’s Rob Carrick asked readers for “a new name for the boring old emergency fund.” Four thousand creative readers responded with ideas from Face Punch Fund to Peace of Mind Fund. Though both were top contenders, Mr. Carrick chose Plan B Fund as the best new moniker. Whatever it’s called, it’s the “No. 1 financial lesson of the pandemic,” he wrote.

Even if it feels like the pandemic is waning, and even if we escape another economic downturn, do not forget the lesson. “I’m inclined to believe most people don’t have enough in their emergency funds,” Mr. Carrick says. That said, though he’s heard many numbers and rules over the years, he doesn’t single out any of them as a favourite. “I’d say if you have a few thousand dollars ready, you’re doing very well.”

Report on Business reporter Erica Alini compiled a handy list of experts’ tips on how to build – and keep – an emergency fund. If three- or six-months’ savings feels daunting, start with a more accessible goal of matching your biggest expense, suggested financial adviser Zainab Williams. “For most people … that’s rent or the mortgage payment,” notes Ms. Williams. Once you get there, aim next to double it.

Does an emergency fund protect me from inflation? How about recession?

Just a few years ago, Mr. Carrick explains, a lot of people’s thinking was: “What kind of dummy would put money in a savings account earning 0.5 or 1 per cent when stocks were shooting that high by the hour?” Sad but true, if you compare your emergency fund to most anything else, “it’s an unfortunate reality that the after-inflation rate of return is probably negative.” As such, you’ll want to keep this in mind and adjust the size of your fund accordingly.

That said, while your emergency fund isn’t helping much in the inflation department, it’s doing double-duty on the recession front. “If you lose your job, if you get sick and you can’t work, the fact that your emergency fund is there and ready to help you is invaluable,” Mr. Carrick says.

Where does an emergency fund belong on my financial priority list?

“It all depends on your interest rate, but you’re likely paying 19.99 per cent on that debt, paying off that should be your first goal,” Ms. Cane says. Why? “Because not many people can come up with any savings at all when they’re deep in consumer debt.”

And though it’s not recommended – in fact Ms. Cane it calls “a worst-case scenario” – if you ever find yourself in a real pinch, your credit card could serve as your emergency fund. But that can’t happen if your cards are already maxed out. The bottom line is, ideally, you would have no debt and an emergency fund – not one or the other. “I would suggest putting 80 cents of your dollar down on the debt and 20 toward your emergency fund,” Mr. Carrick says.

Where should I park my emergency fund?

This one’s too easy: “A high-interest savings account, boom,” Ms. Simmons says. It’s not flashy, she admits, and it’s tempting to think that money is sitting there doing nothing. “But it is already doing something,” she says, “it’s protecting you from debt. That’s its job, and it’s not supposed to be earning you money – that’s what investments are for. Your emergency fund needs to be liquid, safe and accessible.”

Rob Carrick agrees wholeheartedly. “The priority is to protect the money,” he says. A comparatively low interest rate might make a registered retirement savings plan, tax-free savings account or – the absolute worst choice you can make, says Mr. Carrick – the stock market, more tempting. But “preserving the money takes precedence over growing the money,” he says.

That said, be warned not to make your emergency fund too accessible. “You want a separate account that’s just a little bit more of a hassle to access than your regular savings account,” Ms. Cane says. For this reason, some money experts recommend that your emergency fund live at a bank other than your usual one. “It’s kind an out-of-sight, out-of-mind trick,” she says.

How do I start an emergency fund?

Ms. Simmons suggests a little financial exercise to get you started. “Look over your life in the last year or so and look for moments that took you by surprise,” she says. “Now ask yourself, ‘What is the amount of money that I wish I had in that moment?’” If you have that amount elsewhere to move to your new fund, do that.

If not, understand that there’s no wrong way to start an emergency fund, and no amount too small. “More and more financial institutions are doing this technique now where they’ll round your purchases up to the nearest dollar and move your change over into an emergency fund,” Ms. Cane says. The mode is new but the model is not. “This is really just like the old days when you’d come home and dump your change into a jar and once a month you add it up and take it to the bank,” she adds. A few dollars a day add up much faster than you think.

For those starting entirely fresh, set up a new account at your usual bank (if you want that warm feeling of seeing your safety net in action) or a different bank (if you’re the kind of person who sees a pile of available money just sitting there simply too tempting). It’s ideal if you have a lump sum in mind, but remember the account can and will fluctuate. Be sure to keep topping up to replace whatever you use.

And the best way to save for an emergency without ever having to think about the emergency is to automate your account. “Set a monthly amount that moves itself over and you won’t even notice,” Ms. Cane says. Until the furnace breaks, that is, when you’ll suddenly be pleasantly surprised. 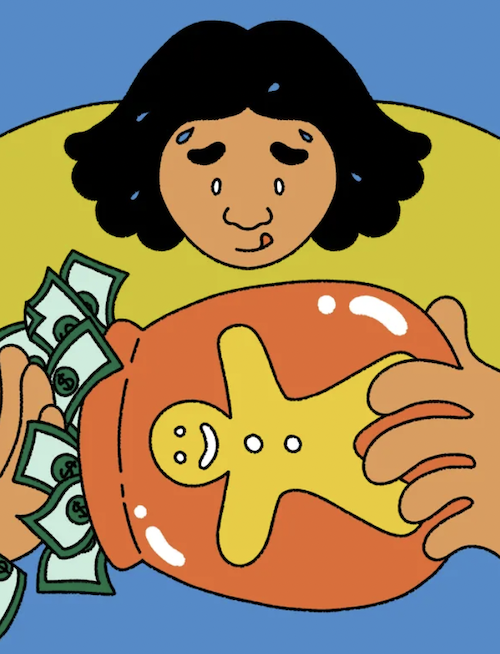