Now that anyone can have a baby without sex, sperm and egg etiquette can be a touchy subject

As Lauren MacMillan’s due date approaches, she’s attracting attention from well-meaning strangers. “At work, I get lots of ‘Ooh, your husband must be so excited!’ ” she says.

That’s when MacMillan, a 32-year-old account manager from Winnipeg, explains she has a wife, whom she’s been with for eight years and married to for a year and a half. There’s an awkward moment, followed by an even more awkward moment. “The look says, ‘Uh, how did this happen?’”

If you must know, MacMillan and her partner used a donor. They went through a U.S. sperm bank and chose a handsome fellow with similar interests in sports and travel. She got pregnant on their second try. No, she doesn’t know the donor, not even his name, but yes, she paid more for someone who was willing to be contacted when the child turns 18.

“I’m always open about my lifestyle,” says MacMillan. But if you happen to bump into her in the supermarket, a big smile and a “congratulations” will do just fine. “Don’t make assumptions,” she advises. “Times have changed.”

Much as it did with adoption, the secrecy that once surrounded third-party reproduction, along with any shame of making or being a so-called “donor baby,” is disappearing in front of our eyes. Many societal and statistical factors are at play, including increasing numbers of same-sex marriages, women postponing the age of marriage and childbirth, and more single women choosing motherhood via sperm donor.

The best estimate comes from the Canadian Fertility and Andrology Society, which counted 18,335 cycles and 5,758 pregnancies in 2010—including in vitro fertilization, sperm injection and frozen embryo transfer—across all 28 assisted reproductive technology clinics in Canada.

But that number is fraught with problems, says Dr. Al Yuzpe, co- founder and co-director of the Genesis Fertility Centre in Vancouver. “You can’t equate insemination cycles with women or pregnancies, and you can’t equate pregnancies with babies,” he explains, since most women do multiple cycles, some miscarry and many give birth to twins or even triplets.

Complicating matters further, it’s against federal law in Canada to pay an egg or sperm donor, so many people simply go to a different country. “These numbers are just a small percentage of all the people who use donors, or who go to the U.S. and other countries,” says Yuzpe. Nonetheless, egg donation and surrogacy have significantly increased, if only because advancing technology allows them.

For the best proof that third-party reproduction is entering the mainstream, just turn on the television. On the Emmy-winning Modern Family, gay couple Mitch and Cam—parents to Lily, who was adopted from Vietnam—hunt for a surrogate for their next child. Mitch’s sister, Claire, offers up an egg. “What are we supposed to tell the baby?” asks Mitch. “Say hi to your Aunt Mommy?”

And NBC’s sitcom The New Normal tells the story of Bryan and David, a gay couple in Los Angeles who find a surrogate to carry their child. The brash show openly addresses new family models, while sneaking some jabs at traditional ones. “My dad screwed me up pretty good. What do you think two dads would do to a kid?” asks David. At a playground, Bryan looks around at deaf parents bragging about how they don’t have to listen to their kids whine, a little person with a soon-to-be-taller daughter, and a 50-year-old mother of triplets. “Face it, honey,” he says. “Abnormal is the new normal.”

That pop culture addresses egg donation and surrogacy, and even makes us laugh at and embrace it, is a big step with a huge impact. “Movies, TV shows and comic books are all acknowledging that there’s a community out there that isn’t heterosexual,” says Francine Proulx-Kenzle, president of PFLAG Canada. “It shows huge progress in acceptance.”

For Proulx-Kenzle, role models like Elton John and Melissa Etheridge provide the bridge between the LGBT and hetero communities. John became a father via surrogate at age 63; Etheridge and partner Julie Cypher, after three years of secrecy, revealed their donor was musician David Crosby. “Keeping this big secret goes against how we are choosing to live our lives: very openly,” said Etheridge in a Time magazine interview.

The decision of how much to reveal, when and to whom, is a big one, whether you’re famous or not. It has been reported that Nova Scotia MP Scott Brison and his husband are considering parenthood via a surrogate, but he has decided to keep the details private. “When it’s done we’ll have a birth announcement, but I’m not talking about the process,” he says. Once he has a healthy baby, Brison may say more. “We’re not sure yet; we’ll play it as it goes. This is personal and not part of my public life.”

The most intrusive question for some gay men is, “Who’s the bio-dad?”—suggesting one is more a father than the other. At Daddytypes, a blog for new dads, one anonymous commenter says when he and his partner are asked where they got their baby, he says, “The stork.” Sometimes rudeness is met with the same: “My partner’s favourite answer to ‘Where’s the mom?’ is ‘She’s dead.’ ”

Others are more open about their fertility stories, mainly because the children will have to answer the same questions their whole lives. When people see her two-year-old adopted daughter, “they’ll see my blond hair and blue eyes, her brown hair and brown eyes and olive skin, and say, ‘She must have a dark father,’ ” says Shannon Thompson, 45, a “single, slightly overweight, queer-identified person.” The Toronto career coach mostly laughs it off. “There are many traditional families that don’t look anything like each other. That’s lots of people’s experience.”

At 25 months, Thompson’s daughter will soon recognize the word “adoption” and ask questions. And while there are books for adopted children, they are rare for kids of non-traditional families. So rare, in fact, that Toronto sex educator Cory Silverberg had to write his own.

What Makes a Baby was created for the four-year-old son of Silverberg’s friends, a trans man and his female partner. “The reality we’re addressing is that more and more parents are not biologically related to the kids they’re raising,” he says.

In What Makes a Baby, bodies aren’t male or female, sperm don’t wear bow ties and eggs don’t wear tutus. “Not all bodies have sperm in them. Some do, and some do not,” he writes. Colourful, smiling figures are used to explain. “When grown-ups want to make a baby they need an egg from one body and a sperm from another body. They also need a place where the baby can grow.”

Silverberg read the story to enthusiastic friends and decided a market existed for the book. He figured if he raised $9,500 in a month, and invested in an editor and illustrator (Toronto artist Fiona Smyth), he could afford to print 1,000 copies. With the help of social media, Silverberg’s idea went viral and he reached his goal within 24 hours. When the book sold out, he signed a three-book deal with American publisher Seven Stories Press, and it will be re-released in May.

Books like Silverberg’s may help kids, but grown-ups need help, too. “Kids are smarter than we give them credit for. We can teach them to be nice and kind,” says Dara Roth Edney, an assisted fertility and infertility counsellor in Toronto. Half of her clients are gay men, but her practice also includes lesbian couples and single women exploring their reproductive options. “It’s adults who have values and judgment that make things confusing.”

When it comes to curiosity, there’s a fine line between tactful and tactless. “People don’t always have a sense of what’s appropriate,” says Roth Edney, who has two daughters, both delivered by surrogates. Through years of infertility, Roth Edney says she got her share of unsolicited commentary. “‘You’re so lucky you didn’t have to give birth!’ Or ‘Why didn’t you just adopt?’ Or ‘You can have my kids!’”

From an expert, some advice: “If you’re not close to somebody, keep your mouth shut,” Edney says. If you are a friend or relative, when your single lesbian friend or married gay son announces they’re expecting, respect boundaries and don’t put anyone on the spot. “Ask if there’s anything you can do to support them.” 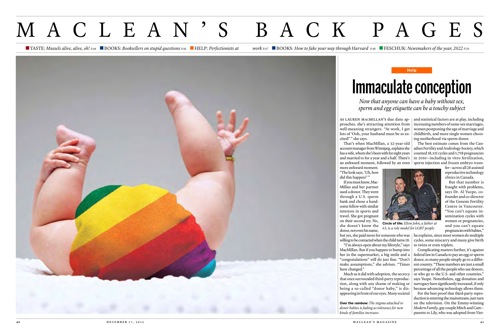 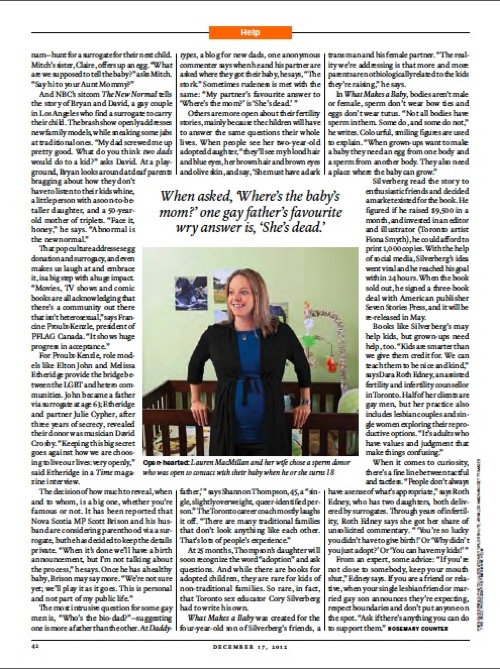