Do you need to break up with your job?

Choose a job you love, they say, and you’ll never work another day in your life. Maybe things start new and awkward, but you get comfy quick. Soon you’re spending 40 hours a week together, plus some late nights with Thai takeout and the occasional weekend. You take a mini vacation to an out-of-town conference. But then things get complicated, the stakes rise and suddenly you find yourself thinking about work at home, complaining about work to your friends, obsessing over how work can be more, wondering if your job is really the one for you. Which begs the obvious, awkward question: Uh, is work your boyfriend?

Exhibit A: While on a rare movie date with my real boyfriend, despite all efforts of resistance, I discreetly check my BlackBerry a dozen times while Jessica Chastain works 24-7 fighting terrorism in Zero Dark Thirty. Back at home, I reluctantly obey my guy’s one drink rule: I can chit-chat about work for as long as it takes to consume one drink. And as a freelance writer who loves and lives her job, I must sip slowly, because a funny thing happens after my last gulp: guilt-ridden silence. Worryingly, and unlike my better-balanced and conventionally employed drinking partner, I often have no thoughts that aren’t work thoughts.

But, Exhibit B: I wasn’t always like this. Like most people I know, I have the dubious, at best, job history of a flippant dilettante. My resumé is filled with random stints: a publishing internship here, a few months at a TV show there. Two months of telemarketing, two-and-a-half shifts of waiting tables (true story). If you had told my bad-waitress alter ego that my future self would keep notebooks of work to-do lists, she would have laughed and spilled the water jug on you.

There is a name for job-jumpers like me: wander women. It’s a useful term coined by Dr. Marcia Reynolds, an Arizona life coach and author of Wander Woman: How High-Achieving Women Find Contentment and Direction. Reynolds has abandoned the old logic—that women prioritize family and relationships over careers—and replaced it with a new theory for a new generation of ambitious and high-achieving women who instead look to work for fuzzy feelings. “This generation was brought up to think that you can get out there and do anything but also that you are great, unique and better at something than anyone else,” says Reynolds. For us, a job with a paycheque isn’t enough. “Our drive isn’t just to make money anymore; it’s to follow our individual passion. We have to make a difference and be acknowledged,” she explains. “And when we don’t get that, we move on.”

Work not giving you the love you need? “Lack of emotional fulfillment” is a new addition to our job dealbreaker list: Since our fickle employment market rarely offers three decades of job security plus a cushy pension plan anymore, it’s only logical that we expect our labours of love to deliver in other ways. And if you’re a one-love kinda gal, it’s often work that gets prioritized while relationships—Reynolds’ included—fizzle on the back burner.

“I destroyed a few of my marriages because I thought ‘You can’t take work away from me,’” admits Reynolds. Another unapologetic workaholic is Lady Gaga, though she doesn’t see it that way. “I’m a passionaholic,” says the songstress, who works 16 to 20 hours a day, uses her downtime to write and choreograph performances and only reluctantly cancelled her Born This Way tour for emergency hip surgery in February. When it comes to choosing between relations and vocations, her advice is bleak: “If you’re wondering which way to go, remember that your career will never wake up and tell you that it doesn’t love you anymore.” It’s a dark thought to keep you up at night, ladies. But, of course, a career and a boyfriend aren’t mutually exclusive—it just sometimes feels that way.

“I’m focusing on my career right now because that’s the phase I’m in,” says my pal Marybeth, a 29-year-old TV anchor with a long-distance boyfriend whom she sees on weekends. And no wonder—it took her a week to find 10 minutes to answer my questions, and, though she’s too pressed for time to do the math, she estimates she logs up to 80 work hours a week. This includes not only her official nine-to-five, where she typically skips lunch and stays two hours late, but also a freelance gig on evenings and weekends to supplement her wage (since she’s not an up-and-coming Bay Street lawyer or a top exec at a PR firm).

Still, Marybeth doesn’t consider herself a workaholic. Compared to her friends with hubbies and kids, she says, work stress is average and almost pleasurable. I can relate; I’m also in my “career phase,” a go-go-go decade for twentysomethings to get as far ahead as possible before looming domestic pressures drag us down. As such, single, childless women are almost pathologically productive: We represent 62 percent of Canadian university students, we study more and drop out less, and we graduate with higher marks and increasingly land better jobs, according to Statistics Canada. We’re also twice as likely to work unpaid overtime. Head to a big city like New York and a single, childless woman can expect to earn 17 percent more than her male peers—so says the U.S. Census Bureau.

But if you think men of the same generation are feeling the competition and kicking up their game, you’re wrong. “Men are failing to rise to the challenge,” says Aurea Crotty, entrepreneur and founder of the group Savoir Faire Professionals. Newly relieved from the burden of breadwinning, “men are entering uncharted territory and need to get with the program,” she says. “Do they really want to be trophy husbands? My husband jokes all the time that if I want to make all the money, he’ll stay home. He’s so comfortable with that.”

Lovable male slackers slackers—Bill, Ted, every dude in a Kevin Smith or Judd Apatow film—loiter just about everywhere in pop culture, beer and video games in hand. Their female counterparts, however, are shrill fun-ruiners, quick to squash their afternoon buzz with grown-up expectations. “I really feel that our culture is not inspiring men to step up their game,” says Crotty, reminding me that, despite all our advancements, Canadian women still perform nearly twice as much domestic labour as men. Statistics Canada concurs: In 2012, women reported 13.8 weekly hours of housework compared to men’s 8.3. “Now we’re making the money, we’re working long hours, and then we’re coming home and still cooking dinner and taking care of the household,” says Crotty.

If that mere thought has you slipping into a depression, it’s almost no wonder some of us choose work over home—at least for now. As for me, while it seems everyone else is enjoying a leisurely brunch, I’m choosing to spend my Sunday morning of a long weekend working on an article about workaholism. Some scientists suggest that workaholics may be as addicted to stress hormones as junkies are to heroin. In my case, while I’m not doing tequila shots for inspiration or anything, I do crave the rush of crossing this piece off my to-do list. The moment promises relief, but it never delivers.

So when does ambition turn into addiction? Workaholics Anonymous, which has meetings quietly popping up in church basements across Canadian cities, asks 20 hard questions. Among them: Is work the activity you like to do best and talk about most? Have your long hours hurt your relationships? Do you get more excited about work than about anything else? With a pile of yeses on my conscience, and feeling a bit wary of the 12-step program that Workaholics Anonymous recommends, I turn to Susan Washington, a Vancouver-based “Master Success Coach” who specializes in work-life balance.

Though both Crotty and Reynolds question whether it even exists, work-life balance is big business to coaches like Washington who make their living selling peace of mind to stress cases like me. “You can go high speed for a while,” she warns me, “but, eventually, you will burn out.” The infamous burnout isn’t just a celebrity excuse—ahem, Mariah, Demi, Lindsay, Selena, LeAnn—it’s a legit medical condition with symptoms including exhaustion, cynicism and inefficacy. Or, as Washington describes it, “when you’re lying in bed in the morning and you don’t feel you have the energy to brush your teeth.”

Complicating matters, explains Washington, is that, contrary to popular belief, stress doesn’t cripple some and bypass others. “It’s not like some of us have unsolvable problems while others don’t; we’re all prone to it,” she says. “Each of us is as bad as burned out on our worst day.” Conventional tips to minimize stress and maximize productivity still apply—exercise, meditate, don’t eat chips for breakfast (like I am now)—but the goal, however you choose to do it, is to control your spiking cortisol and the cheap rush it provides. “On the one hand, the urge to do more and be greater can be a great motivation,” says Reynolds, “but on the other hand, it can kill you.”

There has got to be a time when enough is enough, when you can stop to recognize and celebrate your progress—whether it’s with an eight-hour workday (hit 11 hours and double your risk of depression, says the Finnish Institute of Occupational Health) or your own one-drink rule. Then there has got to be another point—in my case, a computer-free week on a beach—when you can turn off progress altogether. Consider yourself more important than every assignment. “Exercise, read a stupid book for fun, schedule time for yourself like any other appointment,” suggests Reynolds. “We sometimes keep moving—it’s an endless quest for something more. We don’t ever stop to celebrate.”

So, today, I’ll break up with my work boyfriend (at least until Monday morning, when I’ll try again to keep things casual) and, since I’m not much for meditation, take my one drink in celebratory champagne form with my flesh0and-blood boyfriend. With any luck, I might stop talking and worrying about work long enough to score a different kind of passion—which is stress relieving, I might add. And it’s a good thing too: Despite all my best efforts, my work boyfriend never puts out. 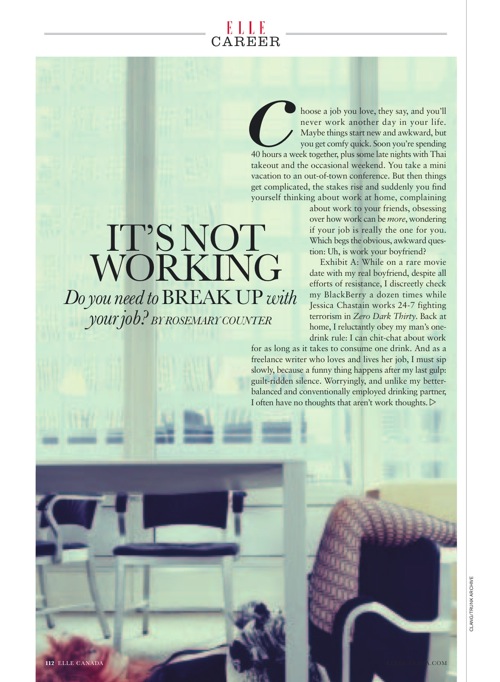 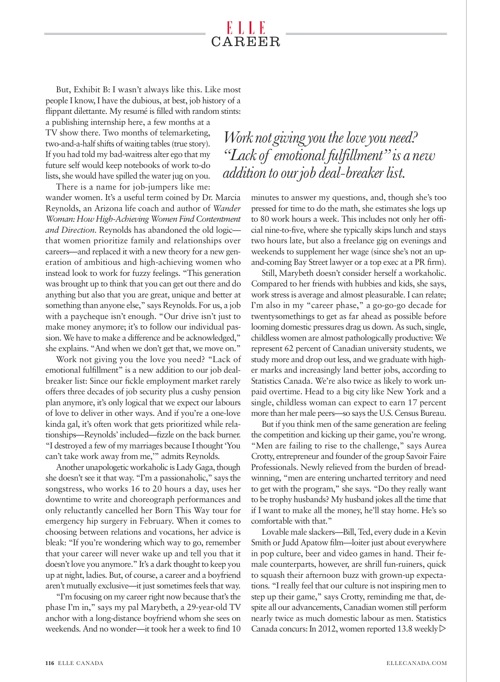