“Anyone Can Get It, Any Year”

In fact, her entire career started with a bit of rebellion. Her kind Shakespeare-loving grandfather instilled in her a love of live theater, even and especially “the smell of fresh scene paint.” After Beavan studied theatrical production design at London’s Central School of Art and Design, a friend offered an irresistible opportunity. “She was traveling to India to work on a film, but she was nervous to go alone, and if she swapped her first-class tickets for two economies, would I go with her? Of course I would.”

On a small film set in Rajasthan, Beavan became a helper with sets, props, and costumes. Soon enough, producer James Ivory assumed she was the costume designer, which she effectively became and has been ever since. Ivory hired Beavan on five more films before the end of the 1980s, including The Bostonians, which earned Beavan her first Oscar nomination.

Starring Vanessa Redgrave, Christopher Reeve, and Madeleine Potter in a queer love triangle, The Bostonians is an adaptation of Henry James’s novel set in 1876 Boston. For a newbie costumer and her colleague John Bright, in what would eventually become over a decade of collaborations, this meant research. “These days we’re blessed with the internet,” notes Beavan, “but it used involve hours and hours of looking at journals in the library.”

Whether The Bostonians or Mad Max, internet or not, Beavan’s process always begins with the script. “We rely first on notes in the script, if any…. Next we study the stories of each character, and then support that story via costume.” She often heads to the “fantastic stock as first port of call” at the Costume House in London to dig through racks of costumes and pull pieces that work. Beavan makes things she can’t find, but original commissions take time and cost money, both often scarce.

All of the above was especially true on the set of 1985’s A Room With a View, where again alongside James Ivory and John Bright, Beavan dressed a cast of British theatrical royalty including Maggie Smith, Judi Dench, Helena Bonham Carter, Daniel Day-Lewis, and many, many more. “It was me [and four others]. We dressed and undressed daily a crowd of 150 into layers and corsets,” recalls Beavan, who was pregnant at the time, “and the shoelaces! Oh, my God, the shoelaces.”

The film—set in England and Italy in 1907—was a box office success that earned eight Oscar nominations and three wins, including one for Beavan. In 1987 that category was announced via a nine-minute presentation featuring live models in costume alongside dozens of choreographed dancers, emceed by Lauren Bacall. Beavan and Bright took to the stage in matching tuxedos to accept their awards.

Beavan’s next two nominations, like A Room With a View, were adaptations of work by E.M. Forster. All are set in England at the turn of the 20th century, but the characters within them vary widely. Howards End, for example, revolves around three families: One rich Edwardian conservatives, another a pair of half German bourgeois siblings, and an impoverished young couple living in sin. Sartorially, they barely overlap. “It’s extraordinary how different the people are within the books, even though they’re all from the same period,” she says.

Neither film won Beavan the Academy Award, but the Forster trio culminated in something better: A longtime friend and muse in Emma Thompson, who plays the villainous Baroness in Cruella, and whom Beavan describes as “wonderful” and “phenomenally helpful.” Far from a mannequin to be dressed, an actor is a costume designer’s key collaborator. “If I wanted to just tell people what to wear,” Beavan says, “I’d be a fashion designer.”

Thompson starred in each, but Beavan’s next two Oscars nominations were big departures in either direction from the era of Forster. The Remains of the Day placed Thompson alongside Anthony Hopkins, clad in crisp three-piece suits, and Sense and Sensibility with Kate Winslet in high-waisted, Regency-era dresses with beaded details and meticulous embroidery.

Sense and Sensibility was a strong contender at the 68th Academy Awards, with seven nominations, but in the costume-design category James Acheson won his third statuette for Restoration. “There’s always that meh moment [when they call someone else’s name],” Beavan admits. “I’m only human.” She’s since learned to ignore any and all rumors in the days leading up to the ceremony. “Really anyone can get it, any year.”

Perhaps unfairly, the better Jenny Beavan does her job the less likely you’ll notice her work. There are exceptions, of course, “but in general costume designing done well is almost invisible and never intrusive,” she says. “If I’ve done my job well, the clothes are so appropriate to the character and the setting that you don’t even notice them. They’re just a seamless part of the whole.”

Beavan’s next three Oscar nods were period dramas set in Siam/Thailand in the 1860s, the English countryside in the 1930s, and royal residence Sandringham in 1939. Gosford Park and The King’s Speech collectively garnered 19 Oscar nominations and five wins, but none for best costume design.

After decades of perfecting her craft in period costume design, Beavan gambled on an era she couldn’t study: the dystopian future. “This was a real break from my CV,” she says. “I was thrown way out of my comfort zone and also into the desert.”

Fantastical worlds in film can easily gravitate to camp or cartoon—think the colorful costumes of the Marvel universe—but for Mad Max to instead look like a “weird but possible reality,” Beavan designed clothes that humans could make with materials we’d actually have postapocalypse. “Leather would last, certain linens could make it. We used a lot of vellum, which is usually made of goatskin, though the Mad Max characters would have used human flesh. You do have to use your imagination,” she says.

Nearly three decades after her first Oscar win, Mad Max finally nabbed Beavan her second. She took to the stage in the aforementioned red-carpet rebel style. “What another lovely day,” she said when she arrived at the microphone, quoting the film and nodding to the Mad Max team taking home another five Oscars that night.

Beavan had an advantage in “remembering the ’70s the first time around,” but Cruella nonetheless was a massive challenge in many ways. Filmed at a breakneck speed to accommodate star Emma Stone’s tricky schedule, Cruella required 47 costume changes for Stone in the titular role, with an additional 33 for Emma Thompson as her fashion-designer nemesis. And all of the film’s outrageous fashion stunts would happen the old-fashioned way—that is, CGI-free.

As the harsh Baroness, Thompson was once again consigned to wearing a corset. “Bless Emma for wearing these clothes, as they were not comfortable,” Beavan says. “All are very sharp and extreme, like vintage Dior.”

Cruella, meanwhile, makes a spectacularly meta debut in a Baroness design, which Beavan’s team also created just so the viewer can see it in a shop window, later refashioned into Cruella’s creation. The red dress is an homage to Charles James’s “Tree” dress, for which strips of fabrics were sewn and interwoven to hug the body.

Another of Cruella’s best looks is “a little homage to my past,” say Beavan On top, a military jacket like one she’d have bought from Portobello Road and paired with Doc Martens. Beneath, a cascade of crimson frills large enough to swoosh around and engulf a car—but light enough that Stone can carry and maneuver it.

If she had to choose a favorite look from Cruella, Beavan would choose the “garbage truck dress.” (Emma Stone agreed, describing the look at a Disney press conference as “absolutely ludicrous.”) “The look is supposed to be made with the Baroness’s 1967 spring collection—a detail right from the script. We added some rubbish and newsprint, and some fans so it moves, but the way it lifts and floats is all real.”

As always, Beavan is thrilled to be recognized by the Academy, but also as usual, she’s not looking forward to choosing her ensemble. And since she’s nominated for the spectacular, over-the-top, performance-art fashion of Cruella, the pressure is higher than ever before. “I’m going to try,” she promises regarding her Oscar style. “But I’m pretty busy, so don’t get excited.” 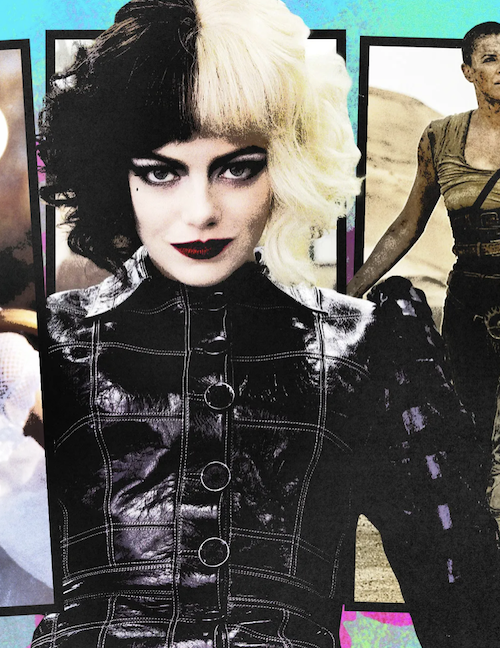