Mark’s Work Wearhouse rebrands itself to chase a female demographic

Indifferent shoppers might not notice, but look up: Mark’s Work Wearhouse, the massive Calgary-based clothing retailer best known for it’s firm grasp on the working-male market, is now just Mark’s.

“Research showed that although the name grew us into an enormously successful business, it was limiting our growth,” says Wendy Bennison, vice-president of operations. After 35 years, 380 stores and counting, and a $166-million price tag when Canadian Tire bought it in 2001, Mark’s is rethinking its identity. “The words ‘work’ and ‘wearhouse’ over our door were creating misconceptions about the brand,” says Bennison.

The massive reinvention is now in “full rollout mode.” It began in a 26,000-sq.-foot flagship store in Edmonton, proved similarly successful in Winnipeg and Ottawa, and is moving further into Ontario this fall with 60 updated stores. One of the largest rebrands in the Canadian retail landscape in years, it includes store redesigns, new merchandise, a national marketing campaign and the name change.

Losing two words, which subtly links it to higher-brow department stores like Macy’s in the U.S. and Holt Renfrew—colloquially known as Holt’s—here, “will be enough to dramatically broaden the appeal of the brand, particularly to women,” says Bennison. According to their own market research, Mark’s currently has the No. 1 market share in men’s industrial and casualwear, based on dollar amount and units sold, but they’re only No. 11 in ladies wear, lagging behind leaders like Gap, H & M and Zara.

In hopes of broadening and boosting their appeal to a most-coveted retail market—younger, fashionable women who buy more and shop often—Mark’s has incorporated “female-friendly shopping space, larger and more comfortable fitting rooms and better mirrors and lighting.”

And all without alienating their steel-toed-boot-clad clients, which is what branding expert and Consumer Republic author Bruce Philp calls “having your cake and eating it, too.” The company’s strength lies “not just with working people but with the idea of working people.” Like Levi’s, a brand that idealized its blue-collar roots, it is a good marketing card. “In that way, they may be leaving their most valuable thing on the table,” Philp says.

A rebrand is always risky, but it can pay off. Burberry transformed itself from your grandpa’s raincoat shop into a line of luxury high fashion. In the late ’80s, the Gap went from a strip-mall jean store to a go-to store for cool basics. Their new 2010 logo, however, called a “symbol of corporate banality” by Vanity Fair, was so poorly received it was ditched within weeks.

Consumers sense and resent too much corporate strategy, but are also fickle about what they will and will not accept. In Mark’s case, the brand’s value lies not in the products, but in the loyal consumers, says Philp. “They say they’re not leaving the working guy behind, but I see pictures of stylish, pouty models and am wondering whether Joe Lunchbox is going to relate.”

The possibility is a concern of Mark’s. “We would never want to do anything to confuse our industrial consumer or make them think we’re not focused on them,” says Bennison. “We’re being very careful: you don’t want to hang women’s underwear next to men’s footwear.”

In a store known for waterproof hoodies, no-iron shirts and ramps for testing boots, it’s hard to imagine where the fall’s skinny jeans, suede booties and yoga wear will fit in.

Nelia Belkova, the 28-year-old founder of Toronto’s Styleblog.ca, gives a mixed review after attending a Mark’s fashion preview. “I can see they’re making improvements and paid attention to the season’s colours and tweeds and plaids, but a lot of it feels old-fashioned and safe to me,” she says.

Belkova walks by Mark’s in the Eaton Centre three times a week, but has only been drawn in once this year. In fact, Belkova prefers the old Mark’s. “The only things that really appeal to me are the high-performance classics to replace the ones I already have,” she says. “And I don’t have to iron them.” 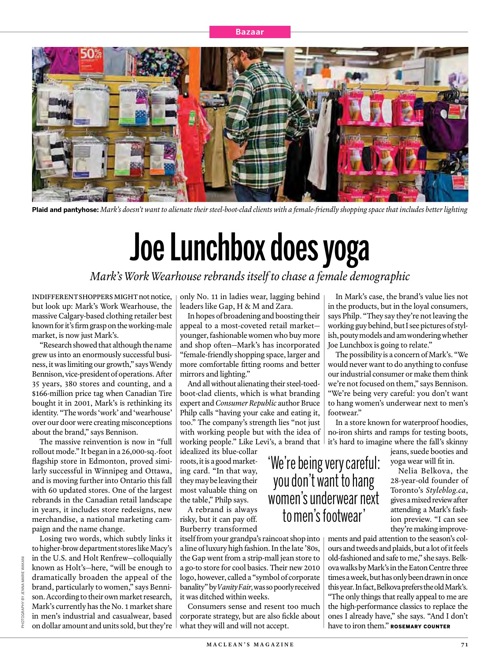