Judging a book-lover by his cover

The intrepid GlobeGal, a.k.a. Rosemary Counter, looks for love on a website shelf

Imagine you’re at a dinner party at somebody’s house. You’re single, but looking, and see an attractive stranger standing by the bookcase. You muster up your courage and wander over to chat.

Witty and articulate, you mention your favourite book – strange and obscure. But wait for it, against all odds and reason, that’s your new love interest’s favourite book too!

Obviously, you fall madly in love later that night. The end.

This is the nerd fantasy of Matt Sherman. Two years ago – then in a cushy but unfulfilling job at a design firm – he was post-break-up (also unfulfilling) and ready to get back into the dating scene. “At the time, I thought, I’d like to meet a woman who read this book or that – a like-minded person,” he says. Long story short: www.alikewise.com was born this July.

Since then, 36,000 bookworms have flocked to the free dating site for “Dating by the Book.” Alikewise is currently about 55 per cent women and 45 per cent male, with a wide age range: “The sweet spot is mid-to-late 20s to early 40s,” Sherman says, though he saw a 72-year-old sign up just today. So as a 27-year-old woman with a stocked bookcase, I should be a fine guinea pig.

Reluctantly (I fear online dating) and to my boyfriend’s dismay (baby, it’s business), I sign up as GlobeGal – considering myself quite shrewd. The site is clean and wonderfully advertisement-free, and even the terms and conditions are welcoming and lighthearted: “Be Clever. Be Flirty. Be Nice.”

Other than that, and unlike Craigslist, “Photos need to be of you. With clothes on.” Alikewise isn’t liable for outcomes, it says, “especially if they’re totally awesome,” and they won’t be verifying content, so don’t lie. (But does “of course I’ve read Ulysses” count?)

Sherman – a.k.a. FounderGuy, but he’s vowed not to date clients – suggests you be honest and personal in your book picks. There is a more conventional “My Story” fill-in-the-blank portion – “I would describe myself as …” or “You’ll often find me …” – but since my answers so far are “professional Internet predator” and “pimping myself by the word,” I decide to stick to the books.

My first search is boozy smart-talker Dorothy Parker who, surprise surprise, no men like. To ease my crippling solitude, Alikewise expands my search to include other books relating to Dorothy Parker – I’m confused now – and up pops Pseudoacademic, a 32-year-old man from Toronto. My one and only “match” so far describes himself as “a failed intellectual, maybe” (I dig his self-deprecating ’tude) and likes 18 books, including pervy favourite Lolita and Elizabeth Smart’s self-indulgent gem By Grand Central Station, I Sat Down and Wept. I wrote a kick-ass English paper about it once; this must be love.

But when I click on Smart, I land next on Ben, a bald dude with funky glasses. Ben likes my girl Smart (ooh! Love?), but scroll down and he also digs Eat, Pray, Love (ah, never mind).

Clicking freely, it’s clear I’m not landing any boyfriends with Sylvia Plath’s The Bell Jar. I decide to go more mainstream, but am nonetheless determined to be honest, and so choose Margaret Atwood’s Alias Grace. (I don’t, however, mention my fascination with women who kill.) I’m then matched with Causeequalstime – a reference I’m not hip enough to get, and that’s not a good sign. The 28-year-old Markhamite likes Atwood among 81 other favourite books, 13 of which are by Chuck Palahniuk. And just like that, I’m out.

I know I’m judging a cover by its book – and yes, it’s harsh. But with limited other information, it’s all too easy for literary snobbery to prevail. Unlike Match.com or Plenty of Fish, where you can pick everything from eye colour to religion to – gulp – salary, Alikewise only lets users specify a suitor’s age and location. “Those check boxes are designed to exclude possibilities, and we wanted to avoid that,” Sherman says.

This is both good and bad – the novel ability to cater to specifics is possibly online dating’s greatest selling feature – and so may change with time. “If we learn that dating sites have to have those things, then we’re open to that,” he says. “But for now, I really like our idea of starting a conversation.”

It’s just like the dinner party, you see. The idea isn’t that you necessarily love all the same books, but that you’re both passionate about reading.

This, to me, makes sense, and not just because my bookcase is full of feminist theory and self-help books. (For the record, after a whole week, GlobeGal’s messages remained countable at zero.) But truthfully, I don’t know if I want a man whose favourite book is Valley of the Dolls, nor do I think my boyfriend would like me any more if Hunter S. Thompson spoke to my soul. And yet somehow, we get along just fine. 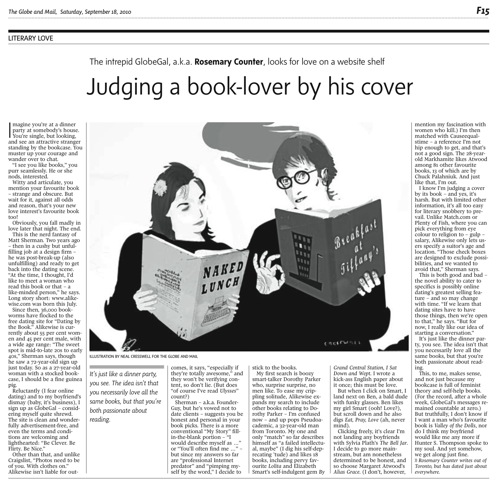