Keeping up with the Anistons

After years of disappointment and desperation, if you believe the tabloids, Jennifer Aniston announced her engagement to actor Justin Theroux this summer. But it was this week that made it official: the so-called girl-next-door flashed a monstrous solitaire diamond estimated to be an eight-carat emerald-cut that cost as much as $500,000.

Many tsk-tsked at another show of celebrity excess—or critiqued its “gaudy” style and dismissed it as “a showpiece”—but Aniston is no different than her peers. Angelina Jolie drags around 16 carats, while Kate Middleton poses with her 18-carat sapphire. But big rocks aren’t just for (Hollywood) royalty; Emily Maynard, the latest Bachelorette, just received the biggest ring in the franchise’s 10-year history, and Avril Lavigne announced her engagement on the front of Hello! via a 14-carat, pear-shape, platinum diamond.

“I saw this happening about 10 years ago,” says Ron Davidson, an award-winning engagement-ring designer in Vancouver. “Britney Spears gets a massive rock, the media runs it in People magazine and all the brides at home put pressure on their fiancés to spend more.”

A 2012 survey for Weddingbells magazine found that the average ring-band combo cost about $2,500, but for many reasons, average engagement prices are notoriously skewed. Firstly, women don’t often know the exact amount spent by their partners, who tend to exaggerate. (The same survey, for perspective, found that 41 per cent of brides would spend more on their ring if they could.) Also, couples who don’t care for flashy jewellery tend to be very frugal, whereas those who go big often go very big, says Davidson. His average sale is between $7,000 and $8,000.

Moreover, the proposal itself has changed. Thirty years ago, explains Davidson, “the man would come in, I’d help him pick something and his fiancé would be wickedly happy.” Not so anymore.

One such modern bride is Rebecca Chan, 27, a Toronto wedding planner, who had selected her perfect ring before she’d even met the perfect guy. Then everything changed at a work meeting. “I looked at the bride’s finger and saw my ring,” says Chan. “I realized I didn’t want something that everybody else wants.”

And so, when her ﬁancé-to-be proposed, he deviated from the traditional fantasy. “He said, ‘Don’t worry, this isn’t the ring. I’ve set up an appointment for you tomorrow,’ ” says Chan. She said yes to a “loaner ring” from the jeweller and then began designing her own creation.

Chan decided on a sapphire in violet, which has since inspired the accent colour at her wedding next May, and since it’s “considerably more affordable” than her original diamond pick, Chan could upsize to three carats. “With coloured stones, the bigger the better. I say, ‘Go big or go home.’ ”

For women who want the oversized look without the oversized price tag, jewellery stores are getting creative. “Teeny-tiny little solitaires just aren’t the look anymore,” says Sandra Danberg, vice-president of merchandising at Canada’s Ben Moss Jewellers, “so we’re seeing a move toward multiple diamonds that recreate that big look.”

For example, its Embrazo ring has four princess-cut diamonds—or sometimes nine—arranged in a square so that it looks like a bigger stone. The Passionate Heart ring has a smaller diamond surrounded by two rings of diamonds. “It’s got that enhanced look without being outrageously expensive.”

Or, like Chan, more women are choosing semi-precious stones. “We see that a lot now—we call them big, bauble-y rings—in amethyst and topaz,” Danberg says.

But Carlene Nichols, a bridal stylist from Calgary, says oversized doesn’t matter. “I love cocktail rings with massive stones because they’re fun and funky—you can put them on, but you can also take them off. Just imagine going to the gym with a nine-carat diamond on your hand.”

Not only that, Nichols says a Beyoncé-sized ring just isn’t affordable for most guys. “There’s already a lot of pressure on men, and now there’s a bit more. So thanks a lot, Jennifer Aniston.” 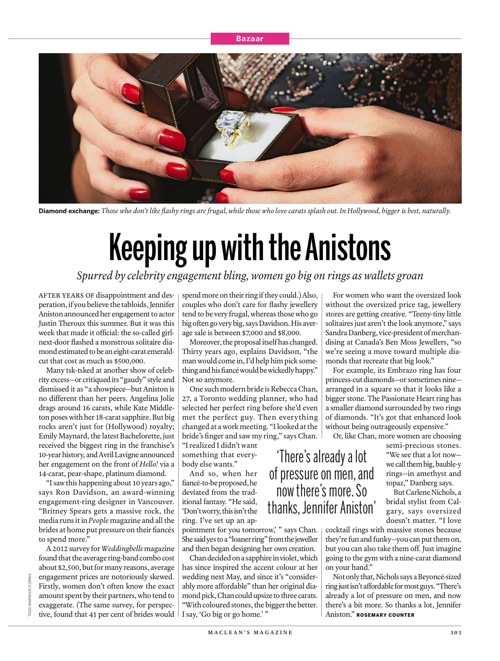