Mystery time
The Backstory: Agatha Christie didn’t just write mysteries—she lived them. In 1926, after her husband revealed that he was leaving her for another woman, Christie disappeared. Following an 11-day manhunt and media circus, the novelist was discovered living under a pseudonym, and with apparent amnesia, in North Yorkshire at the stately Old Swan Hotel (classiclodges.co.uk) in Harrogate. Did she really lose her marbles or was she setting up her estranged hubby for murder? The mystery remains unsolved. Today: The vine-covered grand Victorian manor now fittingly offers murder-mystery weekends filled with clues and red herrings.

Table talk
The Backstory: Rivalled only by the Chelsea, New York City’s Algonquin Hotel (algonquinhotel.com) was the place for artists and authors to meet during the roaring ’20s. Gertrude Stein and Simone de Beauvoir both frequented the Algonquin (the hotel was one of Manhattan’s first to accommodate single female guests), but it was wisecracker Dorothy Parker—between jobs and marriages—who took up permanent residency in a cozy suite with “barely enough room to lay my hat and a few friends. Today: Parker (and brunch) enthusiasts must visit the newly restored Round Table Restaurant or the Blue Bar. If you’re keeping writer’s hours, a late-night menu serves Dorothy Parker Mini Burgers and a Parker cocktail made with Chambord.

Wildly luxe
The Backstory: Left Bank bohemians have long flocked to L’Hotel (l-hotel.com) in Paris, but its most famous literary claim to fame is Oscar Wilde, who moved in at the turn of the century. Newly released from prison and impoverished, Wilde nonetheless lived his final days at L’Hotel, where he famously declared, “Anyone who lives within their means suffers from a lack of imagination.” Today: L’Hotel has been transformed from a secret hideaway to one of Paris’ most famous hotels—not that privacy can’t be had outside your lush suite. The secluded hammam pool and steam room—built into the first-floor vaults—are available by appointment.

Austenian inspiration
The Backstory: It’s hard to imagine Pride and Prejudice needing rewrites, but legend has it that Jane
Austen perfected Mr. Darcy’s grows-on-you charm while camped out in Room 2 at the Rutland Arms Hotel
(rutlandarmsbakewell.co.uk) in Bakewell, England. Austen’s descriptions of intricate stonework and rolling hills have many convinced that Bakewell appears as the market town Lambton in the girlie classic. Today: While
Austen made do with a candle and a coal fire, the hotel’s recently refurbished rooms feature soaker tubs and Wi-Fi. 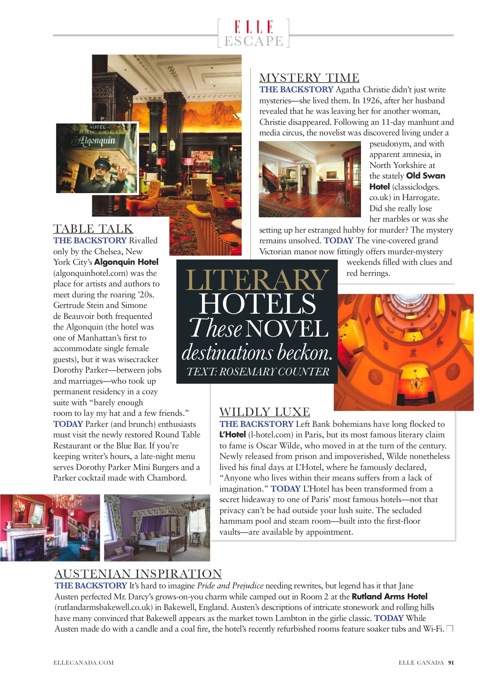