How dating companies are having one-night stands with algorithms

Last year, as those still in the dating trenches watched in wonder, not one but two online dating stories of fairy tale-esque success made the media rounds. First was Los Angeles PhD student Chris McKinley, who applied his mathematical skills to OkCupid to “hack” their algorithms, transforming his empty inbox into a treasure trove of compatible mates and, 88 dates later, a marriage proposal (and, perhaps inevitably, a buzzed-about ebook, Optimal Cupid).

Then tech CEO Amy Webb, similarly luckless on the Jewish online dating site JDate, created her own algorithm using 72 traits (“top tiers” are deal-breakers; “second tiers” are negotiable) to land a husband. Webb’s “How I Hacked Online Dating” TED Talk coincides with her book, Data, A Love Story, the epilogue penned by her partner. “Her list described me so perfectly, it was almost psychic,” he wrote.

It’s mystical magic of a modern-day sort. “Algorithms can mathematically continue to become more precise in terms of connecting like-minded and similar people,” says Amarnath Thombre, president of Match.com, “but there will always be magic to love.” Match uses 1,500 parameters in a “love equation” with a feedback mechanism that self-corrects based on your ratings and feedback. So “the more you rate, the better you date,” he says.

Thombre makes it sound fun, but the truth is most of the 40 million North American people currently dating online are unwilling to make the effort McKinley and Webb did. A few years ago, online dating was the lazy alternative to dragging yourself out on the town. Now it feels suspiciously like hard work; there are ignored emails, forced follow-ups, awkward notes, more ignored emails, throwing in the towel, starting over. And, since this is all long before you meet a real person for a real date in real life, when those hours of browsing and clicking can be undone by one in-person minute, frustrated users are asking a new question: Is this whole system an exercise in futility?

Take, for example, OkCupid, which was founded by Harvard math majors in 2004. Instead of just clicking boxes of “ideal mate preferences” — which a study from Northwestern University found don’t reflect desire much anyhow — expect to answer 350 questions that require various levels of soul-searching: Do you believe in monogamy? How willing would you be to try out new things sexually with a partner? Would you ever change your religion because your significant other wanted you to? Do you consider yourself to be an honourable person? Are you happy with your life? But no pressure, OK? Just plug in your answers and let the matching engine crunch your data to present your mathematical soulmate — as evidenced by marriages, the not-so-subtle objective for eHarmony, OkCupid and Match.com, where “the most marriages” is the claim to fame. As a smug fellow asks in a new commercial for eHarmony: “Do you want fast or forever?”

As it turns out, lots of us prefer fast. New and successful apps such as Tinder and Grindr use the speedier and simpler swipe system — left for “no,” right for “yes” — and call mutual yeses a success. It’s hot-or-not on steroids, free and downloadable to your phone right now. Needless to say, the online dating market is increasingly fierce.

In an effort to stay hip with its customers, even Lavalife is relaunching. While other dating sites and apps scramble to cater to a splintered client base — serious settler-dowers on one end of the spectrum, casual hooker-uppers on the other — Lavalife’s new mandate is “to make dating fun again” for the in-between-ers.

“The problem now is there’s nothing in the middle,” says Alisa Civiero, head of the Lavalife relaunch. Most sites let you specify what you’re looking for (marriage, dating, “casual”), but Lavalife casts a wide net by allowing users to choose more than one option. It also has a new “In Common” feature, an instant chat system (“You like cats? Me, too”) and a social media-esque homepage that you customize and update as you go. “We want to put the agency back into your hands,” Civiero says.

Like Tinder? “Swiping ‘yes’ or ‘no’ at a picture is for someone wanting something fast,” she says. A hasty match can disappear as fast as it appeared, as could Tinder itself. “The dating landscape is changing constantly,” says Thombre, “new players are entering and leaving the market every day.”

And user attention spans are shrinking by the moment. “Many people won’t do 20 pages of questions,” Civiero says. The new Lavalife will use name, basic details, a photo and “some fun questions, like what you like to do.” Personality quizzes and philosophical questions are long gone, since they’re mostly wrong anyhow. A recent survey by BeautifulPeople.com, online dating for beautiful people only, found more than half of online daters lie — or tell selective truths, exaggerate, or fall victim to wishful thinking (hence the beauties-only screening process). “The problem is,” Webb says in her TED talk, “algorithms work but you and I don’t. Very few of us have the ability to be totally and brutally honest.”

Here’s an honest thought for you, then: For every fairy tale finding of “The One” via online dating, there is a horror story of algorithms-gone-wrong. “A dating algorithm suggested my own brother was a great potential match,” says Sofi Papamarko, founder of the Toronto-based Friend of a Friend Matchmaking service. On paper, they were perfect and compatible, but in real life, they were related by blood.

“Algorithms are basically a series of ones and zeros while human behaviours and preferences are not binary,” she says. To Papamarko, algorithms are a lazy outsourcing of a skill that requires the personal touch. “They couldn’t possibly hire enough people to decipher and intuit the huge amount of data that these sites take in. Anything but algorithms would not be financially or logistically viable.”

Most people, she adds, are wising up to the limitations of algorithms. “Singles are tired of being matched by a machine,” she says. “What’s great about Tinder is that you only communicate with matches to whom there’s a reasonable physical attraction. What’s not great about Tinder is you have no idea what these attractive people are about.” This roll-of-the-dice approach could make for either a fairy or cautionary tale of online love, about equally. Hope the odds unfold in your favour. 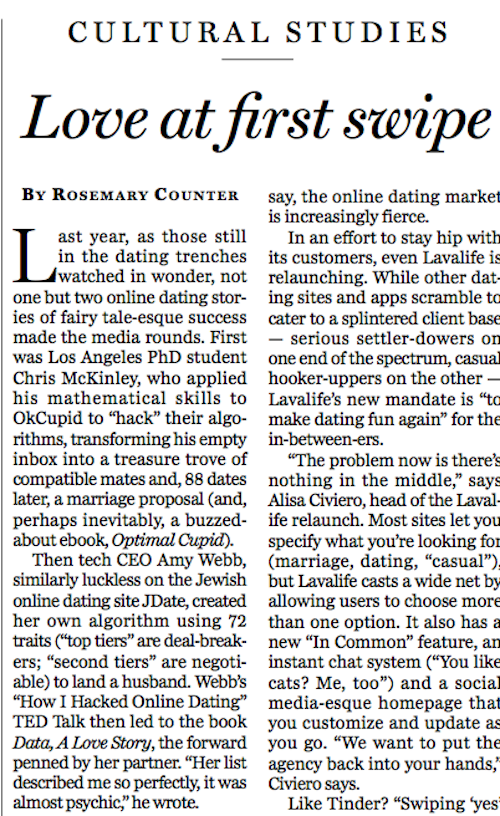 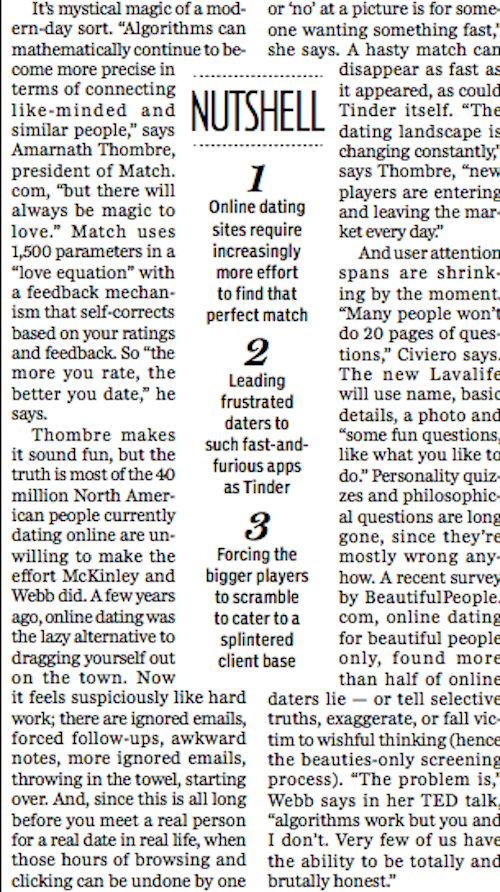 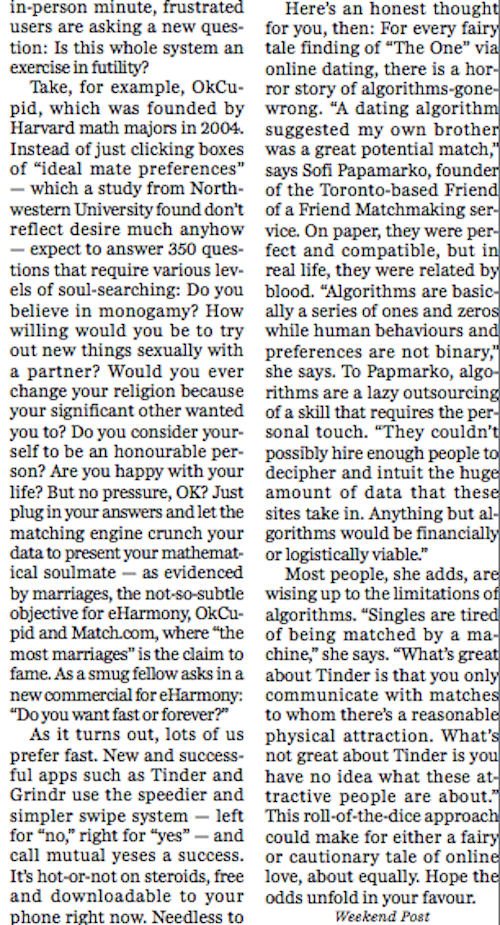