Why celebs and the über-rich aren’t the only ones opting for a pre-nup. What’s stopping you?

It cost Kevin Costner $80 million to divorce his college sweetheart. Steven Spielberg paid his ex-wife $100 million after his “pre-nup,” which was penned on a napkin was ruled invalid. Paul McCartney left his marriage down $48.6 million, plus child support. And if you think women are any safer, you’re wrong: Guy Ritchie had Madonna hand over a reported $90 million, hitting a material girl right where it hurts.

But never mind the tabloid talk; what about us regular folk? We might not have yachts or Palm Beach vacation properties, but we’re interested in protecting our own small fortunes all the same. Because some pre-nups are confidential by law and sensitive by nature, no numbers exist as to how many of us sign on the dotted line. But Julie Stanchieri, a family lawyer in Toronto, sees a whole lot of cautious couples. “Pre-nups are getting more and more common with both men and women, for many different reasons,” she says.

Traditional pre-nups—or “marriage contracts,” as we politely call them in Canada—used to apply only to traditional marriages: He worked, she stayed home with the kids and a pre-nup protected “his” property. Then, somewhere mid-women’s lib, Canadian courts began recognizing female contributions (like dishes and diapers) and fair pre-nups protected her rights to “their” property. These days, women make up 47 percent of the workforce, and nearly one in five is the primary breadwinner. Their earning potential is skyrocketing, as is the age when they get married. Suddenly, traditional marital models are obsolete and a marriage contract is no longer a sign of mistrust or lack of eternal commitment. Now, pre-nups aren’t just about protecting his money or her rights; they’re about preventing disasters before they happen for both parties.

Take Sarah*, a 32-year-old district finance manager in southern Ontario. She met her husband when she was 25 and he was 38. “He owned a house, enjoyed a private golf membership and drove an Acura,” she says. “I thought he was very successful.” They married five years later—without a pre-nup, of course—and had two children. Since he took responsibility for the household finances, Sarah never even glanced at the bills.

All this could have continued indefinitely had Sarah not lost her credit card while on a visit to New York City. When she called the bank and told them that her balance was zero—because she’d never used it—they told her that she was very, very wrong. A $28,000 cheque, with her apparent signature on it, had been written just months ago. Because her hubby was the frugal kind (he’d get angry when she bought new clothes), Sarah called him frantically. “Someone has stolen from me!” she exclaimed.

You know where this is going: Turns out, Sarah’s husband was almost penniless and had been funding the house—and his gambling habit—with credit cards in Sarah’s name. He scammed $175,000 from her accounts and left her with $88,000 in debt. Now, they’re headed for divorce court, just 15 months after their wedding day. Since she has unwittingly been the breadwinner the entire time and because courts no longer discriminate along gender lines, he has legal claims to child and spousal support. She married a con artist who stole nearly every penny she ever made. And he may be entitled to her hard-earned dollars for untold years more.

It’s horror stories like Sarah’s that have the rest of us thinking twice about our legal rights before we walk down the aisle. The problem is, most people don’t know them. “I can’t tell you how many people have no information about property division or financial support,” says Stanchieri. “Most people are completely unaware.” So, brides-to-be, here’s a legal lesson: Without a pre-nup, the law says that anything you have before the marriage is considered yours (if you’ve kept the papers to prove it, which many people don’t). The only exception is the matrimonial home—the place you’re living on the day you separate. Even if you had the matrimonial home before marriage, without a pre-nup it won’t be considered only yours after separation. Anything you accumulate as a couple, including your property and the increased value of things you owned before marriage, will be shared. The same goes for assets in said home. If, say, you use an inheritance from your rich aunt to buy your spouse that brand new flatscreen TV, consider it a donation.

This, to some, is fair. But if your idea of marriage and partnership looks a little different, then a pre-nup might be right for you. “You get to fashion your own rules before they’re applied to you,” says Stanchieri. The goal is to draw up a fair contract that will hold up in court if things go sour. Of course, a good pre-nup takes time and money, so set aside a few thousand dollars for lawyer hours. If that sounds astronomical, consider the money that you’ll spend on your wedding—or your divorce, for that matter—and remember: It’s much easier and cheaper to draft a pre-nup than a separation agreement.

It’s that looming possibility of a messy divorce that had Jen, a 29-year-old student, suggest a pre-nup to her homeowner fiancé. “I’ve seen too many people get screwed over,” she says. “And not just older people but young people too.” Maybe it was the undergrad in women’s studies or the generation she was born into, but Jen knew that if the roles were reversed—if it were her home on the line—she would protect herself. “If I’d been in his shoes, I would have insisted on it,” she says. “I couldn’t be a hypocrite.”

So, with no assets of her own, Jen offered—and obtained—a pre-nup. It doesn’t say that Jen gets nothing: If they should split, they’ll share any increase in the value of the home. “I lived through a divorce where my mom didn’t fight for anything,” says Jen. “I’d come home from school and more stuff would be gone.” Jen is on good terms with her parents now, but as the child of a broken marriage, she’s treading carefully. And with good reason too: Nearly 40 percent of Canadian unions end in divorce—a majority of them by the fourth year. “Things are rockier than they were 30 years ago,” she says. “We approach everything with caution now.”

The moral of the story is this: With the sting and stigma of pre-nups gone, there’s no reason why you shouldn’t be talking it out with your groom and coming up with a system—traditional or otherwise—that works for you. 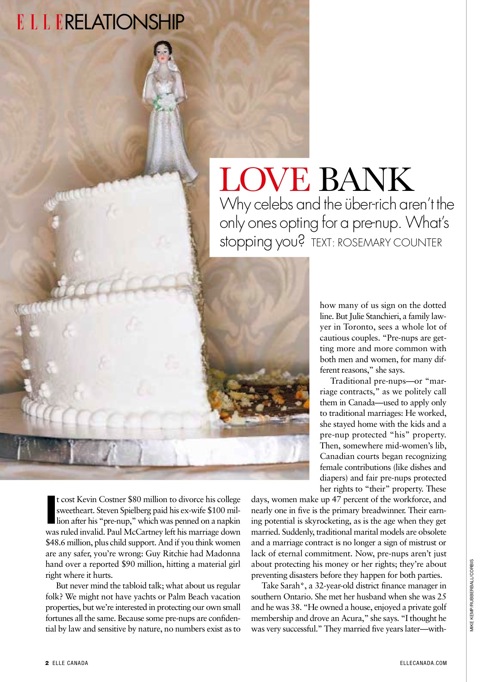 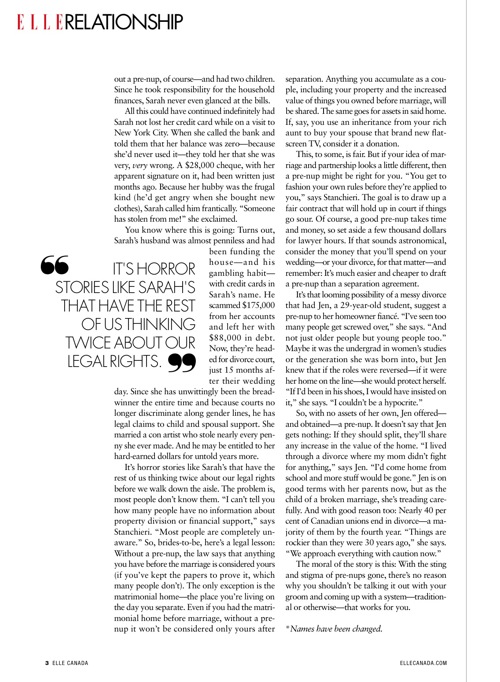