A strong partnership can help you live longer, better.

Imagine Tom and Mary: they’re in their late-50s, both work long hours at stressful careers and have been married since Gloria Steinem declared a woman needs a man like a fish needs a bicycle. They bicker often lately and don’t make love like they used to. Mary thinks Tom barely talks anymore, and Tom thinks Mary’s too needy. But before this long-term relationship heads to divorce court – 43 per cent of marriages end before the 50th wedding anniversary – Mary drags Tom to couples counselling.

New research has transformed how therapists view love and bonding. Whereas co-dependency and neediness were once dirty words, Attachment Theory says that much like a child’s need for its parent, grown-ups are attached to and dependent on their partners – as they should be.

“Of course you need other people; you’re a human being,” says Ottawa’s Dr. Sue Johnson, relationship counsellor and author of Hold Me Tight. Johnson’s Emotionally Focused Couple Therapy (EFT), a therapeutic technique culled over three decades of listening to couples fight about chores and bank accounts, sees petty squabbles as “a battle of the bond.” Rather than probing for deep secrets to ex¬plain away your neediness, EFT admits and embraces emotional dependence on your partner and works instead to strengthen that bond.

If you’re still cynical, get this: unlike other therapies, the American Psychological Association recognized EFT as empirically proven and wildly successful – 75 per cent of couples, says Johnson, will be quickly back in love. Even our friends Tom and Mary? Using Hold Me Tight’s stream¬lined version of EFT – including the seven conversations to reignite the spark in the relationship – we’ll soon see. And maybe it’ll help keep your own home fires burning.

CONVERSATION #1 RECOGNIZING THE DEMON DIALOGUES: Demon dialogues – Johnson revels in kitschy but accessible nicknames – are the negative communication patterns couples fall into. “The main show in town is the Protest Polka, and you can keep doing it for 20 years,” she says. Here’s how it goes: one partner senses a disconnect but, unable to verbalize, they turn to anger and criticism. The other partner feels attacked and moves further away. “The more I protest, the more you shut down,” she explains. Tom and Mary need to first see their dance is the problem here, not either of them.

CONVERSATION #2 FINDING YOUR RAW SPOTS: “In the second conversation, I help them talk about the emotions they never show,” says Johnson. Here, raw spots – a hyper¬sensitivity where an attachment need has been repeatedly neglected or ignored – are revealed. This means instead of getting enraged and demanding more sex, Tom can turn to his wife and say, “I’m so lonely. You don’t touch me.” Mary, in turn, gives him a hug.

CONVERSATION #3 REVISITING A ROCKY MOMENT: Now able to communicate without tears and f-bombs, Tom and Mary can revisit the moments that damaged their relationship – secrets, affairs, deceptions – and discuss properly. Let’s say Tom was caught mid-candlelit dinner with his secretary – whoops! – and Mary erupts with rage just thinking about it. “Now they can deal with a rocky moment without diving into negative dances,” Johnson explains.

CONVERSATION #4 HOLD ME TIGHT – ENGAGING AND CONNECTING: “If conversations one, two and three are a little like going for a walk in the park together, then conversation four is like dancing the tango,” writes Johnson. This is the sweet spot, the title Hold Me Tight conversation that Tom and Mary are aiming for. Without anger and frustration dominating, Mary’s softer emotions – sadness, pain, loneliness – will rise to the surface. “You take a risk and talk about your fears and needs,” Johnson says.

CONVERSATION #5 FORGIVING INJURIES: What may be a minor incident for Tom—it was just dinner, he maintains—is a grievous event to Mary. Johnson calls the relationship traumas “Never Again” moments—where the offended party shuts down the connection in an effort to avoid further hurt. But Johnson’s Hold Me Tight talk unburies the unspeakable to make room for forgiveness, freeing Mary from her pain and Tom from the proverbial doghouse: “They can look at the wounds from the past that have eroded trust, and they can heal.”

CONVERSATION #6 BONDING THROUGH SEX AND TOUCH: We can finally get to Tom’s favourite part, but not just any sex will do. “There’s one-dimensional sex purely on the level of sensation and performance,” says Johnson, but the best aphrodisiac is a safe, loving relationship. Once you’ve reshaped your conversation skills, a reshaped sex life is a pleasant surprise.

CONVERSATION #7 KEEPING YOUR LOVE ALIVE: When the connection is back, Johnson works with her patients to create attachment rituals to last a lifetime. For perspective, Johnson suggests looking at the rituals you’d show your kids or pets: “When my dog greets me, I go down on my knees and talk to her with a soft voice. But do I do any of this when my husband comes home, even with all my expertise? Probably not, and he’s much more precious than the dog,” she laughs. It’s these little things, she says, that will keep the attachment between Tom and Mary—as well as you and your better half—strong and resilient. And when their bond breaks, as it almost inevitably will, they’ll now have to the tools to get back in the groove, says Johnson. “In a good relationship, it’s not whether love lasts, it’s that you fall in love again and again.” 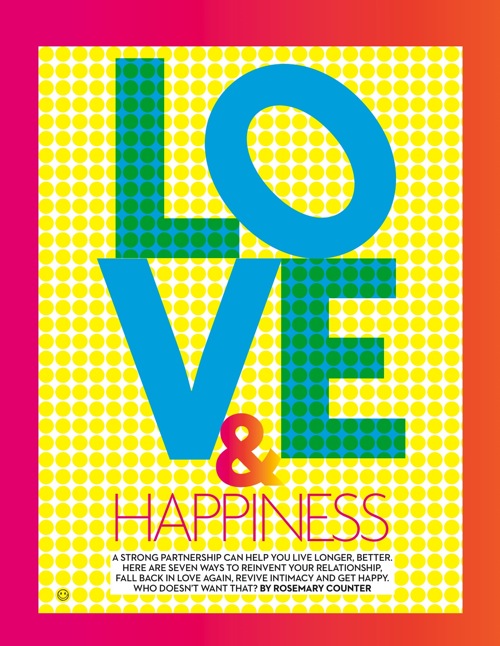 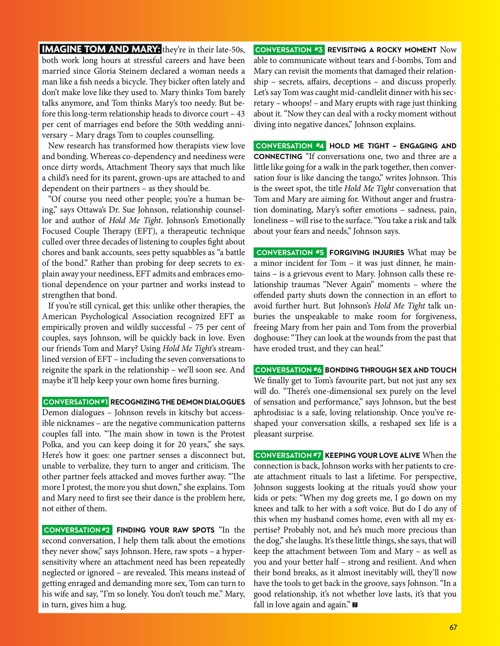