Love on the Run

Vacation flings are a favourite plot device of rom-coms, beach reads and The Bachelor franchise. But it really is easier to fall for someone while far from home

Amidst the nail-clipping, chair-reclining, bare-feet-on-back-of-seat horror stories we hear from 40,000 feet in the air, a survey last summer from HSBC tells a far better tale: Of 5,000 travellers from 141 countries, one in 50 lucky flyers will de-plane having met the love of their life. Is it thanks to eight WiFi-less hours to actually converse? Ever-shrinking seats bringing you extra close together? Three little bottles of white wine?

All of the above, perhaps. But if you don’t find true love in the air, all’s not lost just yet. A 2014 survey from Intrepid Travel found more than 10 per cent of Australian travellers reported falling in love proper while on holidays; casual hook-ups by singletons, on the other hand, are had by one in three, according to a separate 2011 study from Liverpool John Moores University.

Still, it seems every avid traveller has a sexy story or two to tell about striking up relationships on the road. Some last forever, most do not, but vacation love of all forms has this in common: It’s efficient, effortless and, thanks to biology, might be unavoidable.

The nitty-gritty business of travelling – selecting a new locale, running to catch a connecting flight, navigating a different city map – all flood your brain with adrenaline. While we typically view stress as bad, there is such a thing as “positive stress” (aka “eustress,” which gets far less attention than its foil, “distress”). Good stress includes first-date jitters, climbing a mountain, waiting for your water to break and, of course, adventure travel.

Physiological arousal isn’t necessarily sexual, but your brain can’t necessarily tell the difference. The heart beats faster and blood flows more quickly and then, according to a study from Illinois’ McKendree University, higher adrenaline makes you more likely to find people more attractive.

“When you meet someone under conditions that are physiologically arousing, you’re more likely to be attracted to them,” says Dr. Arthur Aron, professor of psychology at Stony Brook University in New York. Long before “excitation-transfer theory” became widely accepted, Aron looked at meetings atop a fear-arousing suspension bridge, where participants reported higher levels of sexual attraction amidst conditions of higher anxiety. A 2013 study at the University of Texas found similar results when people rated others better looking after riding a roller coaster. In pop culture, the phenomenon’s dubbed “The Bachelor Effect” and, in all seriousness, is why contestants on reality dating shows are always bungee jumping and flying in helicopters.

“People on vacation often put themselves in novel and exciting situations, which can have the same physiological effects on your body as falling in love,” explains Melissa Lem, a Vancouver-based family physician (and avid traveller). “Combine this with a sense of urgency – because vacations only last for so long – you’ve got a recipe for accelerated emotional attachment.”

Elaisha Stokes, a New York-based foreign correspondent and globetrotter, agrees: “A limited time frame intensifies things,” she says, “because you know from day one that the relationship is finite, so you give yourself over to it completely.”

Other more tangible factors are also at play. First, setting: warm breezes, dreamy sunsets, palm trees. Next, practicalities: open bars, little swimsuits, ample free time, no dishes or laundry. For women in particular, that last factor is a turn-on and a half. “Women’s desire is completely responsive,” says University of British Columbia sex researcher Dr. Lori Brotto, citing fresh sheets, more rest and extra energy as reasons women might be feeling frisky. “There’s nothing special about the walls in that Holiday Inn; it’s simply about elimination of all the things that dampen desire at home.”

Also far from mind are the politics of dating proper. You can skip the awkward first-date talk (“so … do you have any siblings?”) in favour of a shared experience already in action. “When you’re on a beach in paradise with nothing else to do,” says 32-year-old Torontonian Andre Vande Beek, “your interests are swimming and dancing and tanning – you don’t need anything else.”

Vande Beek’s been going to the same beach in Thailand for a decade, where he’s fallen in love “over and over again.” It’s easy when the long-term logistical considerations that define our usual romantic picks (age? country of residence? stable job? similar values?) aren’t important. “The only thing that matters is your attraction and willingness to be open with this completely different person. Your mind shuts off and your inner being takes control of your heart and your soul opens up.” Maybe this, you ask yourself through a rummy slur, is love for real?

While most travel crushes will eventually end and be filed away into the memory bank, a rare few are the real thing. Kris Rieger, 41, spent a week on a Mexican beach not knowing his “total vacation fling” was actually his wife-to-be, a single bridesmaid at a destination wedding. “We spent our first night up talking until 5 a.m.,” he says. “Vacation gives you the space to do that stuff.”

It took six months of post-trip emailing for the couple to acknowledge that, despite all odds, they were serious. Rieger relocated from Montreal to Toronto and five years later they got hitched. “If you’re lucky enough to find the right person, can navigate the transition back to the real world and dismiss the expectation that things will be as easy as they were in paradise, then you might have a chance,” he says with a laugh. 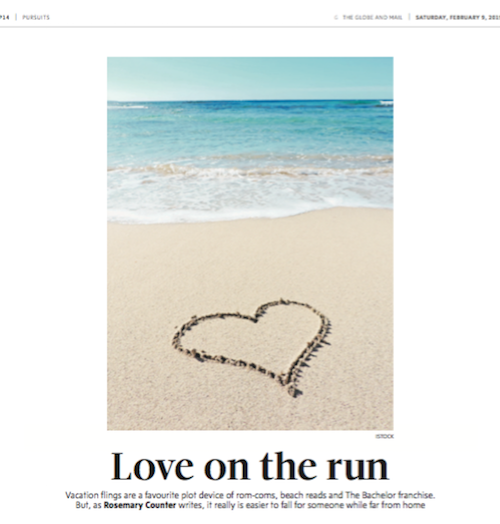 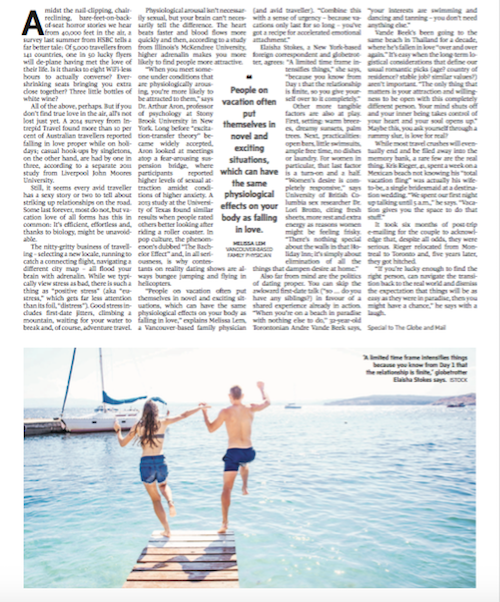